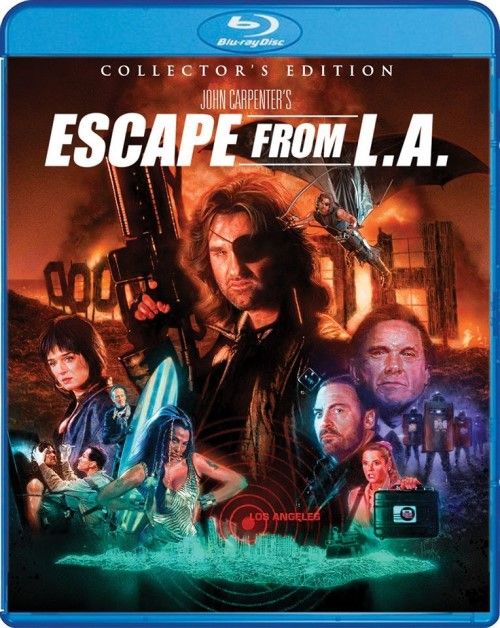 Movie
1981’s Escape From New York is highly regarded as one of John Carpenter’s most iconic action films, blending spaghetti western tropes in with Mad Max esque visuals. And of course adding in a little Kurt Russell at the top of his game. However, 1996’s Escape From L.A. is hailed as one of his worst films, and a severe dive bomb for the director, who would start petering out right around the turn of the century as a go to director. The film has gained a rather cult following over the last 24 years, and is firmly in the “love it or hate it” category for most people. Usually there is no middle ground, and I was adamantly one of the biggest haters of the film when I saw it as a teenager in the 90s. But over the years I’ve softened up to the big goofy satire and kind of enjoy it as a cheesy bit of 90s cheese. It’s nowhere near as fun as the original, but it has kitschy 90s charm to it that’s kind of intoxicating.

Scream Factory has supposedly gone back to the original negative and given it a 4K remaster (which was much needed as the old MGM master was BADLY dated, even 10 years ago), tossed on a whole slew of brand new extras, AND given it a new audio encode as well. Give the film props, or completely destroy it as garbage, you have to admit that Scream Factory has gone out of their way to fix many of the old MGM disc’s issues as well as add on a ton of new stuff to make it quite the collector’s package.

It’s been 15 years since Snake Plissken (Kurt Russell) saved the fascist-theocratic futuristic United States, and he’s back once more as the government has need of the lone gunslinger. The President’s (Cliff Robertson) daughter Utopia (A.J. Langer) has defied his fascist decrees and stolen a black box containing a super weapon device that could obliterate the entire world’s technology, and taken it to the island prison of Los Angeles, where the worst of the worst criminals reside. Without this black box, the madman President has no way of controlling his hose of super weapon satellites, and he needs it back, badly.

Snake Plissken, legendary gunslinger and rebellious soldier, is taken into custody and given a deal. Go into Los Angeles, get the black box, kill the president’s seditious daughter, and all his “crimes” will be pardoned. Easy, right? Well, as usual not so much. Plissken has to dodge the gunfire of rogue criminals, get in and out from under the nose of gangster Cuervo Jones (Georges Corroface), and get back before a specially ingested super virus kills him in the next 24 hours. Fun, right?

Escape From L.A. is pure pulpy fun. It takes the slightly satirical nature of Escape from New York and just makes it goofy to the extreme. I mean, we have Kurt Russell and Peter Fonda SURFING down Los Angeles, Bruce Campbell making an appearance as a crazy plastic surgeon gone nuts, adds in a dash of Cubano “La Raza!”, and hits the frappe button. Nothing is safe, nothing is sane, and the movie has a problem with relying very heavily on 90s CGI, obvious green screen, and some pretty cheesy prosthetics.

It’s not high art, but John Carpenter is still blending a spaghetti western with post apocalyptic Mad Max style visuals for a weirdly satisfying treat. Most of the problems stem from the fact that lightning has hard time striking twice, and it’s been 15 years since the original. Carpenter was already winding down from being the legendary director he once was (pretty much ending his career with Ghosts of Mars a few years later) and even the tough as nails Kurt Russell can’t make it into something it’s not. Luckily Russell is the saving grace of the film, infusing that hard hitting “Clint Eastwood” like character in Snake, and making it rise above the C level script that the rest of the film is. It’s fun enough, but definitely one of those “love it or hate it” films.

One of the biggest problems from the previous 2010 release (and of course the reprintings in 2013 and 2017) was the abysmal video. Well, I wouldn’t say abysmal as much as really mediocre. The dated master suffered from severe over brightening to the extreme, giving the film a washed out look. Not to mention the digital noise from the transfer and some flickering here and there. Scream Factory has gone back and given the new release a 4K re-master from the original negative, and the results are excellent. The brightness has been tamed a lot, giving the movie a much needed grim and dark look to it. There’s a few scenes where you see some black crush, but that appears to be a side effect of the optical effects used to blend the green screen material together. Fine details are excellent, and the movie’s slightly rough grain structure is kept intact. Colors are harsh and unforgiving, with a few splashes of primary colors strewn throughout a world of brown, black and gray. Overall, an excellent looking transfer that is LIGHT YEARS ahead of the old release.

I’m not sure if it’s a different remix, or what, but the 5.1 DTS-HD MA track on the Scream Factory disc is loads better than the 5.1 Dolby TrueHD mix on the 2010 disc. Level matching the two you can hear much better dynamics, with strong surround mixing during the action heavy parts, and slightly cleaner vocals. The LFE is not Transformers level, but it’s surprisingly active, with some super hefty mid bass during the gunfire and surfing scenes. The twangy score is rich and vibrant, with plenty of punch and bass attached to it, and vocals are firmly located up front. It may not be 100% Atmos perfect, but it is a VERY nice 5.1 mix that is very much appreciated along with the video upgrade.

​
You can tell that John Carpenter was just having fun with the post apocalyptic world that he created. He’s sitting there dreaming up new ways to torture Snake, and more high tech gadgetry is thrown at the man than ever before. It’s a goof fest to the extreme, and you can just see Carpenter sitting in the director’s chair with a grin on his face yelling “let’s make this even crazier!” during every take. The Collector’s Edition from Scream Factory is well worth it for fans of the movie, though, as it packs in a host of new extras, gives us upgraded video and audio, and some nice collector’s edition packaging to boot. Movie is a bit “love it or hate it”, but this edition is excellent. Worth checking out.