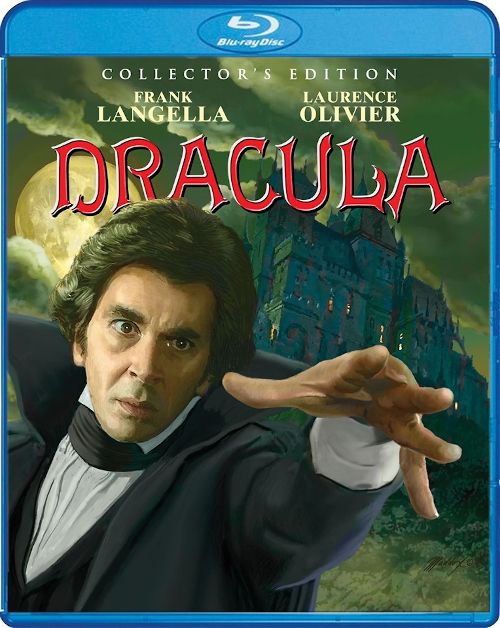 Movie
Out of all of the classic Universal Studios monsters that stemmed from literary horror novels, few can boast the staying power and popularity of Dracula and the mythos of vampire lore. We’ve immortalized him, turned him into an action hero, a villain, an anti-hero, a romantic interest that sparkles (yes, I’m talking about you Twilight), sensual being, a monstrosity, and even a sympathetic tragic character. The idea of vampires has been around for hundreds, if not thousands, of years and modern man is FASCINATED by the idea of a blood sucking undead creature. Back in the day Dracula was the king of monsters, and his films were pumped out at a fairly rapid pace immortalizing the likes of Christopher Lee and Bela Lugosi. 1979 was a huge year for the infamous count, with no less than THREE Dracula films coming to theaters that year, and all three of them now finally released on Blu-ray (Love at First Bite, Nosferatu: The Vampyre and now this version of Dracula) thanks to Scream Factory.

I’ve always had a really soft spot for the 1979 Dracula, despite the fact that it was made from the director of Saturday Night Fever and considered the lesser of the three Dracula films released that year. I don’t know why, but Frank Langella is deliciously comfortable in the role of the infamous count, and the strange hybrid of romance, action, and period piece drama make for an intriguing watch. The film utilizes most of the major big name characters from the novel, introducing Mina, Dr. Van Helsing, Jonathan Harker and of course the count himself, only to change things up a bit with their involvement.

The film starts with a ship being over run by a mysterious wolf like being before succumbing to the waves and crashing into the craggy rocks of England. There Mina Van Helsing (Jan Francis) finds the newly arrived Count Dracula (Frank Langella, reprising his Broadway role) thrown up against the rocks, the only survivor. However Mina comes back to where she is staying at Dr. Jack Seward’s (Donald Pleasence) home (which is also a mental asylum) a bit…..changed. She’s pale, and prone to fainting, of which only Count Dracula is able to ease her suffering. However, her condition worsens, leaving her dead the very next day, to be buried by Dr. Seward and his daughter Lucy (Kate Nelligan).

Her death draws the personage of Mina’s father, Dr. Abraham Van Helsing (Laurence Olivier) who has a few suspicions of his own about her death. Delving deeper into the mysterious goings on around the asylum, Dr. Van Helsing’s research and suspicions are proven correct when Mina arises from her grave and begins to terrorize the asylum, proving his suspicion that there is actually a vampire lord present. A presence that must be eradicated before the people can live in peace once more.

Dracula 1979 is an attempt of a passion project by director John Badham, who had just come off of the hit Saturday Night Fever a scant 2 years prior. With his accolades and successes behind him, Badham wanted to create a modern Dracula movie, but with a lot of the period drama of the old 1960s Hammer Horror films, sans the hammmy humor of that era. Frank Langella literally dominates as the best Dracula we’ve seen in quite some time, which comes as no surprise being that he played in the Broadway show for quite a while as the count. The rest of the cast does a solid job, but Laurence Olivier just adds some delightful class and smoothness to his Van Helsing character.

The only thing that really sort of irks me about the film is that Badham has a hard time nailing down the tone of the film. His attempts at making the movie a cerebral film with action being intimated rather than show turn to the exotic and visually strange at times. There are long periods of sensual romance that look a bit psychedelic, only for it to fade to a more Gothic and brooding presentation with smoke and stone pillars the next. It’s not bad, it’s just that the more romantic and intricate interpersonal bits feel at odd with the more classic Gothic sequences that surround it.

Here’s the fun part. Dracula 1979 was originally released on Blu-ray by Universal a few years back, but there has been a long standing controversy about the home video releases of the film dating all the way back to the Laserdisc. Badham supposedly had wanted to create a black and white film but wasn’t allowed to, so sometime in the early 90s he recolor timed the film to a heavily desaturated look in order to imitated real black and white photography. That means ever since the Laserdisc the home video releases have all been missing the theatrical color timing, and we got this faux black and white version instead. Scream Factory has given us the same transfer that Universal used back in 2014 for Disc 1, and it wasn’t considered the greatest of transfer. The faux drained colors look really fake, and don’t fully imitated the luscious contrast and blacks of black and white photography, instead just looking dim and dull. Colors still are there, but just so minimally that all you can see are the whites and a light olive green coloring to the film. As such I give that version that Badham retimed a 3/5 rating.

HOWEVER, Scream Factory also boasts on this disc that they were able to go back to the original negative and do a full 4K scan for this collector’s edition (which is of course Disc 2). This newly restored version of the theatrical color timing (even though Badham insists that he prefers the black and white desaturated version) looks amazing on Blu-ray. All of the little debris and print damage that was present in the older 2014 version is long gone, and the colors look wonderfully rich and nuanced. The film still has a very heavy olive green tinge to it, but also mixed with earthy browns and splashes of deep blue with the Gothic home of the count. I noticed that long shots tend to look a bit soft on faces, but that is also present in every version of the film I’ve ever seen, so I’m guessing that this is inherent to the filming style that Badham uses. Still, there is plenty of detail to be seen, and the underground face off against Mina is startling in it’s clarity and sharpness (that red may, and that very well done makeup job on her made the scene incredibly creepy). As such, I’m giving this new transfer the weight of the scoring as that’s really one of the big draws of this release. Easy 4/5.

Scream Factory has put the same 2.0 DTS-HD MA stereo track on both the theatrical and the director’s color timed discs, and it’s a solid enough track for a stereo mix from the 70s. I found no auditory glitches, or old analog hiss to the recording, and dialog is solid and clear as a bell as well. The John William’s scored track is soft and melodic, and really doesn’t have much excitement to it until the end confrontation on the boat. The score is a bit cumbersome at time, and doesn’t like the depth of other John Williams works, but it the entire track is evenly balanced and does impressively well for a late 70s stereo mix.

Dracula 1979 is a surprisingly fun film, and I really laud the fact that Scream Factory actually was able to get a newly minted version of the theatrical color timed version that Badham was so adamant about burying years ago. I like what he was attempting with the desaturated home video release, but purists will still like to have the colorized theatrical version as well. With both discs in the set we get the best of both worlds, and a whole ton of brand new special features to boot! This set just oozes quality, with great technical aspects and a nice new cover art and slipcover for this collector’s edition. Definitely good for a fun watch.