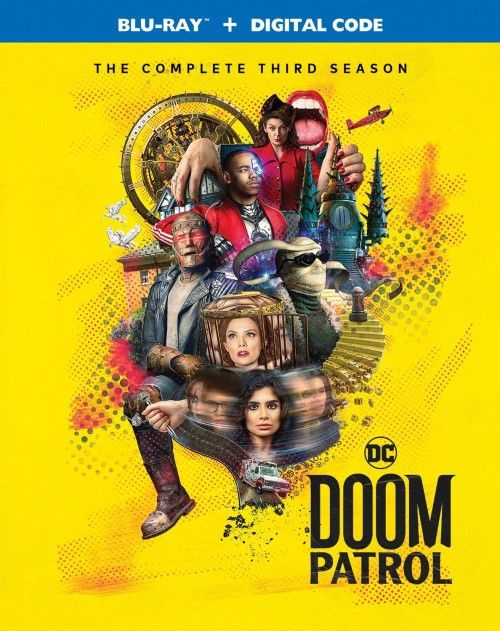 Movie
Holy cow, I keep forgetting the pandemic sort of messed things up for a looooooooot of movies and TV shows. It only felt like last year when I reviewed the 2nd season of Doom Patrol, but then I look back and realize it’s nearly 2 years ago, and that the third season had finished airing on HBO Max back in 2021. Fast forward over a full year and we FINALLY get the home video release on Blu-ray/DVD and it was well worth the wait.

I’ll be the first to say that while Titans is a fun show, Doom Patrol surpasses it in every way. Irreverent, goofy, sideways mirror dimension crazy, it’s about as insane a show as you can get in the DC live action universe without being an elseworlds tale. The show has a voracious willingness to accept the absurd in ways only Umbrella Academy and The Boys has seen fit to do, just in a SLIGHTLY milder and less hard R rating (most of the DC live action shows lightly brush the R rated content, but only ever so slightly compared to other shows) and the way they handle villains is superb. Usually in most comic book shows the villain is a dastardly deed doing monster who deserves what he gets, but in Doom Patrol they’re really no better or worse than our protagonists, and usually just as lost too. It’s a lesson in empathy and how lines blur between true light and true darkness in many ways, and Doom Patrol’s willingness to dive head first into that miry narrative pit is exactly why I love it so much.

Like always, the series has several villains, and several splits along the way. This time Michelle Gomez enters the show as Madam Rogue, a time traveler from the future who has kind of forgotten her origins and why she’s out here. Turns out, she’s trying to stop the Sisterhood of Dada, and of course that means the show rabbit trails into introducing Flex Mentallo, Garguax the Destroyer, and of course the Brotherhood of evil as well. Basically just another day in the life of the Doom Patrol.

Arguably the one character who stands out the most this season is Rita (April Bowlby) who becomes the star of the season (just as she always wanted) dealing her loss, and of course just being exhausted and tired of going on missions. Brendan Frasier still dominates as the robotic Cliff Steele, arguably being the most charming and hilarious character now that he’s not moping around about his family like he did the first season or so. However Cyborg still feels out of place, taking a back seat to most of the action in the show. Which sort of makes sense as that’s how his character is feeling in general, kind of out of place as he feels he belongs more with the Titans than with Doom Patrol.

Love it or hate it, Doom Patrol: The Complete Third Season delivers more of the same insanity that you’ve come to expect since their introduction to the TV in 2019. It’s always interesting to see a show reinvent itself each season instead of becoming The CW stale, and Doom Patrol still manages to pleasantly surprise me by doing just that each and every year. This season opens up the stakes a bit more, but allows the series to relax and just have fun with the insanity rather than needing a singular focus point. It’s what the series does best and I hope it never stops.

The show maintains a high level of quality, with a sort of dark, grime, gauzy, and occaisionally bright yellow look to the series that is straight out of bizarro world. There's lots of red sand tones with sepia highlights and of course a very smokey look when dealing with the low light level other dimensions. There's plenty of strong colors, but they're relegated as splashes to accent the water colored pastels that dominate the landscape. Fine details are exception, with the only quirk to that being the obvious CGI that is just not AS polsished as it could be. Black levels are generally really good, and the ONLY major artifact that plagues the show is the typical color banding that comes and goes. All in all, a very solid looking encode.

There's not much to say that i haven't said in previous seasons, but this really is more of the same. The show shifts from quiet dialog driven soulful dramatic track to full blown comic book track in a matter of seconds. Initially keeping things cool with crisp and clean vocals, and then slamming us back in our seat with a time traveling ship drilling out of the earth, or explosions rocking you back into your seats. Sub activity is forcefull and explosive when needed, and the surrounds get MORE than enough activity when the action kicks off. The dramatic bits naturally shift towards the front of the room, allowing the two extremes to have their own time in the sun. Simply put, a very good mix that does everything well. Quiet when needed, powerful and explosive when the chaos gets too will.

• DOOM PATROL SEASON 3: LIFE AFTER DEATH (All-New Featurette) – Going inside season 3 of Doom Patrol with an in-depth look at all the mayhem and madness that follows on the heels of Niles Caulder's death. Showrunner Jeremy Carver and the cast of the series discuss the loss of Niles, new beginnings, awakenings and new journeys in a unique way.
• FILTER NOT INCLUDED: ROBOTMAN'S BEST LINES (All-New Featurette) – He may be mostly machinery but one thing Robotman does not have is a filter. As The Doom Patrol's most foul-mouthed robot/grandfather, Cliff Steele never holds back exactly what he's thinking.
• Digging Deep Into Doom Patrol: Introducing Madame Rouge – The Doom Patrol is at a difficult crossroads and things get a whole lot more complicated when Madame Rouge (Michelle Gomez) arrives in a time machine with a very specific mission, if only she could remember it.
• This Season On – The Doom Patrol: Robotman aka Cliff Steele, Negative Man aka Larry Trainor, Elasti-Woman aka Rita Farr, Crazy Jane and Cyborg aka Victor Stone, are at a crossroads as each member struggles to face who they are and who they want to be.

Doom Patrol: The Complete Third Season is a blast to watch. The show loves to throw everything at the wall like spaghetti and see what sticks, and luckily for us most of it sticks. Garguax is EASILY the highlight of the season as the maniac warlord’s outfit and persona feels like it stepped straight out of an episode of 1990s Angel or Buffy The Vampire Slayer. The Show maintains a high level of quality on the technical specs, actually adding some decent extras vs. the weak offerings from the 2nd season. Still highly recommended.