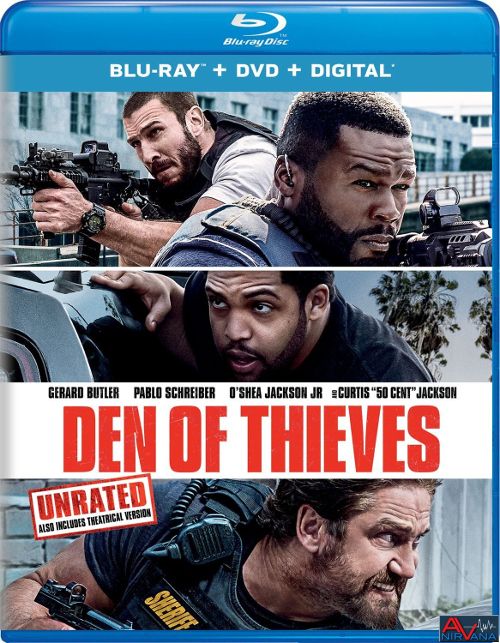 Movie
It seems that a lot of people who were once writers for films are now making directorial debuts as first time film makers. I don’t know whether I’m just becoming more attuned to newbies entering the market, or whether this has been an ongoing trend, but I always welcome new blood as Hollywood really needs fresh ideas. The name Christian Gudegast may not be a household name already, but you most likely have watched some of the films that he’s penned over the years. He was the man behind the Vin Diesel flick A Man Apart, as well as London has Fallen and Pink Panther Marfia. None of them great films by any stretch of the imagination (A Man Apart probably being the best of them), but he makes a solid impression with his first time behind the camera in Den of Thieves. Not only directing but writing as well, Gudegast creates a tense and often times really great crime thriller, but has a few problems with not editing out ENOUGH material and making the film overly longer than it needed to be.

Los Angeles is one of the biggest and most popular cities in all of the Sunshine state, but it is also known for something BESIDES Hollywood celebrities and affluent tech companies. L.A. is known as the bank robbery capital of the world as it has a bank robbery about once every 48 minutes. In this crime thriller, a group of highly competent thieves with military backgrounds decide to hijack an empty armored car, only to run into a snag when one of their group starts a gunfight with one of the drivers. Now they went from robbing an armored car to becoming cop killers and the major crimes division will have their eyes on them. The armored car is just the beginning of the operation though, and with the cops eyes on them fully now, their plan is even harder. Headed by the hard headed Ray Merrimen (Pablo Schrieber), driver Donnie (O’Shea Jackson), loose canon Bo (Evan Jones), and calm family man Levi (Curtis “50 Cent” Jackson). Each of them willing to give their life for Merrimen, and stealing millions in the process.

Sheriff's Lt. Nick O’Brien (Gerard Butler) heads up the investigation, but he’s not your average cop. When most people think of the boy’s in blue tracking down a bad guy, they think of the dedicated family man who’s willing to do what it takes to bring in the dishonorable scum bags. Well, Nick and his tight knit group of officers, known as the regulators, aren’t exactly the good guys. They’re just as bad as the criminals as they live on the fringe of the law, doing whatever it takes, and to whomever they want to bring the criminals to justice. When they grab Donnie for his association with Merrimen and his crew they now have the scent fully in their nostrils, and the band of criminal cops are going to use the poor getaway driver to take down Merrimen and his band of thieves once and for all.

Much of Den of Thieves is really really good. Gerard Butler is wonderful at playing grizzled and hard nosed characters, so it’s no surprise to see him be as brutal and rough around the edges as his character calls for. I almost catch a Heat and Training Day vibe to the film, with Gudegast mixing the high flying thievery aspect of heat, with the dirty cop motif of Training Day and blending the two together to create both a unique and cliched crime thriller. Naturally Den of Thieves isn’t as good as either of the two films I just mentioned, but Gudegast does a decent enough job to really make tip my hat to him for making them hang with those two films as well as he did. The big problem tends to be the over inflated run time, and the fact that his writing isn’t nearly as good as it should be. The interpersonal relationship s with Nick and his estranged wife really bring the film down a bit, and the second act really is like pulling teeth at times.

Even though the film has its faults, there is a LOT going for. It makes up for some of the sluggish points by being incredibly intense and captivating for the rest of the film. You’re sucked into the world of crime right at the beginning, and it really doesn’t let up throughout. There are no “heroes” in this film, just a blurred line between right and wrong where you’re rooting for both sides for different reasons. None of the characters in the movie really deserve your admiration, but the film’s tense mystery about what is going to happen in this showoff between dirty cops and dirtier criminals is quite fascinating, and I have to admit that I almost couldn’t tell that it wasn’t a big blockbuster at times.

Rated R for violence, language and some sexuality/nudity

Den of Thieves was shot digitally (the most common shooting method these days) and the urban crime thriller is quite striking. The movie is a bit noisy at times, but the urban setting is well detailed and full of plenty of sharp clarity. Fine detailing across faces is well defined, allowing us to see Gerard Butler’s rugged face with pinpoint clarity, and the bleak color grading (Reminiscent of A Man Apart) still allows us to see lots of amazing details. Look at the wet pavement and see the drops of water whicking off the tires onto the pavement, or the raw texturing of the asphalt during a heist. Bullets fly everywhere and you can see the tracer rounds flicking off of metal doors, and spinning in different directions. Or the greasy hair leaving sweat marks along characters faces. Blacks are normally very good, though I did notice some crush in the middle of the bar, as well as a few milky looking scenes (only briefly, once or twice in the hotel room where O’Shea Jackson’s character is kidnapped to).

The standout feature of Den of Thieves happens to be the stellar 5.1 DTS-HD MA track. Even though it’s not an Atmos track, or even a 7.1 track, Den of Thieves is ROCKING on Blu-ray. The 5.1 experience is decked out to the max with high powered action and roaring gun battles. The opening heist of the armored car lets us into the film with a blast (quiet literally) as gunfire ricochets all around the listening position, with plinking bullets bouncing off of car fiberglass and glass shards rattling to the ground. LFE is simply punishing, ranging from the copious gun battles throughout the film, to the heavy handed score that keeps the film together. Vocals are crisp and clean, never too muffled from masks or aggressive gunfire, and well balanced amidst the chaos. The final gun battle in the middle of the city really shows off the directionality of the track, with bullets bouncing over cars left and right, horns honking in the background, and the general chaos enveloping the listener in an amazing 360 degrees of sonic bombardment.

• Alternate Ending
• Alpha Males – The cast describes how the tough characters in the film blur the lines between the good guys and the bad guys.
• Into the Den – Director Christian Gudegast and the cast describe the two brotherhoods within the film, the renegades and the outlaws, and their unique sets of skills.
• Alameda Corridor – The cast and director discuss filming the intense scene that take place on the streets of L.A. and the extensive weapons training it took to film it.
• Outtakes and Deleted Scenes
• Audio Commentary with Director Christian Gudegast and Producer Tucker Tooley
• Den of Thieves Theatrical Cut

Den of Thieves is a bit of a mixed bag, in my opinion. Gudegast really brings it all to the table, and the man has a lot going for his film. When the movie is going, it’s GOING. The action is intense, the tension is through the roof and this really feels like it hang with some of the big blockbusters in the same genre. However, those moments don’t last forever. The movie is about 25 minutes too long, and those 25 minutes can really drag the movie down at times. Nick’s personal life is the main one, but there’s too much time trying to track these guys down where I was feeling that we didn’t REALLY need to see that. The Extended cut has some cool scenes that really were a nice addition, but also addes several minutes of unneeded exposition that dragged out the film longer still. At 2 hours and 30 minutes it drags more than a few times during the middle of the film. HOWEVER, I have to admit that I’m really impressed with how well it hangs with movies that are much more popular and much more expensive to make. Gudegast has a good grasp of the crime thriller, but could use a few more hours in the editing room to polish up his films. Definitely worth checking out.

Thanks for the review. I will check this one out.

I thought it was surprisingly decent. Way better than it had any right to be considering it was a cheap $30 million action movie. I guess it did really well in theaters though. made almost triple it's budget. I always like movies that surprise me