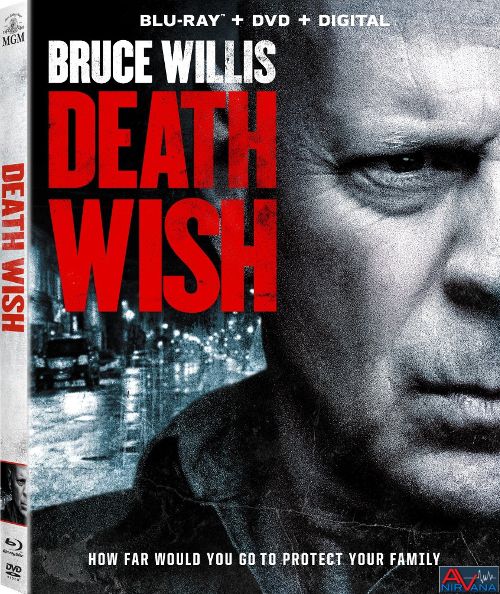 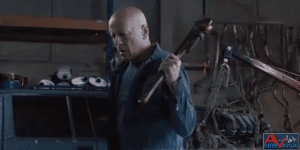 Movie
You haven’t grown up in America if you haven’t seen Charles Bronson’s 1974 Death Wish at least once in your life, or come across it playing on late night cable. It’s nearly as iconic as Die Hard or Commando, but back in the day when Charles Bronson was the king of action movies (even though he had the body of a wrestler and the face of a Ukranian farm worker). So color me a bit leery when horror director Eli Roth said he wanted to bring a remake of it to the big screen starring none other than …..Bruce Willis… the king of ambien laced phoned in performances for the last decade. Don’t get me wrong. I grew up when Willis was a GOD, but over the last 10 years or so the man has stopped trying completely and every performance he does looks like the direct was yelling “Wake up Bruce! Wake up! You scene is on next!”. The guy’s dirt filthy rich, so I’m not sure why he’s stuck to DTV flicks and acts like he’s completely bored instead of just retiring and enjoying life.

I actually stuck away from seeing Death Wish 2018 in theaters due to the fact that the trailer looked underwhelming, and even though Bruce Willis was FINALLY getting another theatrical film, I just wasn’t seeing Eli Roth capture the magic of the original 1974 film. What actually got me curious was the rotten tomatoes score of 17% by critics, yet a whopping 81% (at the time, it’s now 77%) with the audience score. I haven’t seen such a disparity that large since The Last Jedi, when every critic was fawning over it and the fan base was upset. Curious and a bit intrigued, I decided to review the flick and see for myself.

In a sense I was not disappointed. Death Wish is exactly what I thought it would be. A soulless remake of a classic original film (which actually wasn’t all THAT good on a technical level. Cult status has elevated it a bit in people’s esteem). The thing that actually surprised me is that it really isn’t an awful film at all. In fact I had a good enough time with the movie and it has a surprisingly high amount of firearm accuracy compared to most movies (as a gun lover I’m always annoyed at how stupidly they handle firearms in the movies).

Eli Roth has done his best to recreate the original scenes of the movie, going so far as to copy some of them beat by beat. Dr. Paul Kersey (Bruce Willis) suffers a terrible tragedy when a burglary gone wrong renders his wife dead and daughter, Jordan (Camila Morrone), in a coma. Furious that the police (played by Dean Norris and Kimberly Elise) can’t catch the criminals, Paul decides to take the law into his own hands and clean up the streets of Chicago himself. Grabbing a gun off of a gangbanger brought into his hospital, Dr. Kersey learns how to shoot and soon starts gunning down street thugs left and right. However, his main goal is still to find out who murdered his wife and he will stop at nothing until he finds the thugs responsible and make them pay.

There’s nothing really inventive about Eli Roth’s remake, and it has a bit of a strange vibe to it. Eli Roth has always had that “dude bro” type of tone to his films, and this one is no different. There’s a sort of cold swagger that Willis is able to replicate amazingly well, and the inclusion of AC/DC for part of the film’s score adds to that feeling that Roth is doing this for a nostalgia trip. Kersey does his thing, and we get to see his beat up bad guys in spectacularly brutal fashion. Unlike the original film, Roth shies away from the very blatant sexual assault that fueled Bronson’s character to do what he did, and instead just uses murder as the instigator. However, unlike the 1974 affair, the remake uses Roth’s trademark brutality (this IS the guy who made Hostel and Cabin Fever) to take out baddies and it almost adds a bit of a horror flair to the vigilante.

Now while I had some fun, there are some problems too. The main one being that Kersey in 2018 is no where near as relatable as Kersey 1974. Bronson’s character was a conscientious objector to the Korean War, but he was also a military vet and an expert marksman earlier in his life, which makes it much more believable when he goes Rambo on the villains alter on. He has a back story, and he has the skills, but it’s a change of fate that turns him into the ruthless vigilante. Here in 2018 Willis just doesn’t have the skill set. He’s a guy who’s never handled a firearm before (they even incorporate that into his first killing) and somehow he manages to become a crack shot in a matter of weeks, and even has the ability to use hand to hand combat to beat his victims. Also Willis’s ambien induced performance doesn’t help matters any. He’s been bored for the last 10 years in his movies, and it doesn’t look like he’s going to get excited any time soon.

I initially shied away from the film due to the scores it was getting critically, but I think they do treat the movie a bit unfairly. When I started reading them I realized that not a SINGLE one that I found could help but start spouting anti-gun mantra and somehow trying to tie the movie into the “the white nationalism of Trump’s America”. Something which makes me scratch my head just a bit as this is nothing more than a vigilante film made by someone who was inspired by the 1974 Bronson version. Nothing more. Which DOES explain why the audience score is quite a bit higher than the critics score. The audience was looking at it as a cheap vigilante escapism, while the critics were too involved trying to tie some form of political commentary into the movie rather than evaluating it as a FILM. Is it a good film? Not really, but it certainly was fun enough for me to enjoy myself. Bruce Willis still looks like he’s snacking on Ambien the whole time, but Vincent D’Onofrio turns in a good performance as his brother frank. One thing that REALLY stood out to me was how much they tried to infuse realistic gun handling into the movie. Bruce Willis is a huge gun aficionado, so I know he knows how to handle one, but I found it fascinating that Roth put in scenes where we see Dr. Kersey learning how to clean and disassemble his gun for the first time, how to load his rounds in the magazines, and range time to get his accuracy up. Even the gun fights had him reloading and running out of bullets instead of just firing forever. They even had a stove pipe jam in one of the battles and had Kersey clumsily trying to clear the jam like a newbie (had he done one critical thing he could have had it running again). Those little attentions to detail actually made me appreciate the fights just a little bit more.

Rated R for strong bloody violence, and language throughout

Shot using Arria Alexa cameras and ASSUMEDLY transferred to a 2K digital intermediate, Death Wish looks really amazing on Blu-ray. Sadly there’s no 4K UHD, as it seems to have been canceled by the time the press release came out, but the Blu-ray itself looks great. There’s some mild banding in the VERY dark film (much of it takes place late at night in the slums of Chicago), but otherwise this disc is fairly artifact free and really sharp. Daylight shots are appropriately detailed, and the fine details on faces and clothing is immaculate. When the movie gets dark there’s a bit of crush (especially out on the street and in the night club scene), but otherwise the film really is well balanced overall and very crisp looking. You can see the nasty scars that Kersey acquires in his quest for vengeance, and even the little nicks and dings he gets from mishandling his Glock 17 for the first time.

For being an action movie like Death Wish is known for, I was rather surprised how restrained the audio mix was. The gunshots weren’t overly cooked to sound like cannons, and the intensity really takes a while to build up to. The first 40 minutes or so of the film are rather front heavy, with mild ambient sound effects in the surround channels and some really mild bass. It’s not until Kersey goes full bore and starts hunting those who murdered his family that the pulsating LFE comes in and the action really kicks into high gear. Everything is technically sound, with good dialog in the front of the room, and solid use of the surrounds, but I guess I was just expecting more low end power from the film than what we got.

Death Wish 2018 lumbers about a bit haphazardly, never really gaining the heart and momentum of the original, but it still delivers enough mindless action to be rather entertaining. There’s nothing really innovative or exciting, but it works on a primal level and the action alone makes it worth a decent rental in my book. Is it anything special? Not by a long shot, but Willis is solid enough (even bored out of his skull) to make my watch worth my time. Fox’s Blu-ray (sadly no 4K UHD) is technically sound, and the disc has a decent amount of extras (including a commentary by Eli Roth) that is impressive considering the wasteland of special features on modern discs. Worth a solid rental for action fans.

Thanks for the review. Will check it out on amazon prime/netflix once available.