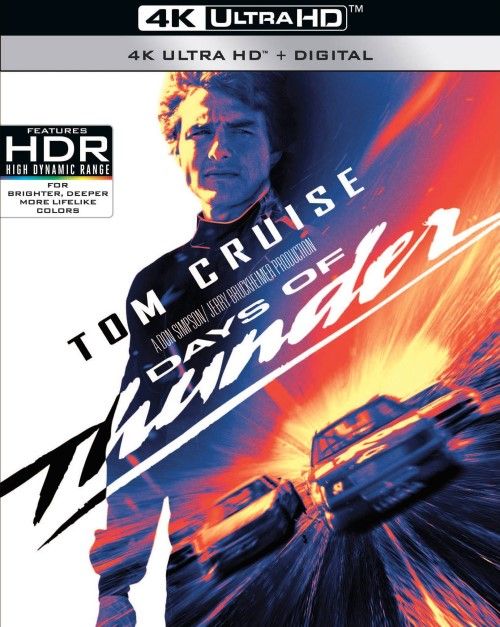 Movie
To finish off the Tom Cruise 4K triple play we have a sort of “odd man out” situation, and not just because Days of Thunder is considered one of Cruise’s weaker efforts. The 4K UHD is also a bit “odd” if you will. It happens to be the only one to not have a Blu-ray included in the set to make it a combo pack (most likely because the Blu-ray itself got a 4K remaster that was used for this 4K UHD disc and was included in the premium “Paramount Presents” line as a standalone film), it has only one single extra on the disc, and it was the only one of the 3 4K UHD Cruise films to not receive an upgraded Atmos track. While none of these things are detrimental or horrifying, it DOES serve to act as if Days of Thunder is the black sheep of this triple play week.

Back in 1990 Tom Cruise was being shot to super stardom. He had just come off of hits like Top Gun, Rain Man, Cocktail and his star was still only JUST starting to take off (the 90s was probably home to his biggest films). Days of Thunder was supposed to be a smash hit, as it teamed Tom Cruise and Top Gun director Tony Scott back up for another film, and was the first film to star him and his soon to be wife Nicole Kidman (who actually starred in two more films with over the next few year in the form of Eyes Wide Shut and Far and Away). However, the film was only a mediocre success and as the years have gone by, the general consensus is that Days of Thunder was one of the weaker “early career” Cruise movies.

Tom Cruise is Cole Trickle, a fired formula one racer who has nowhere to go. He’s raw, rough around the edges, and nobody in his industry will touch him until down and out race promoter Tim Daland (Randy Quaid) brings in retired pit officer Harry Hogge (Robert Duvall) and teams him up with the young man. Cole may be rough, be he can drive like a bat out of hell and has enough raw talent that Harry and Tim both think they can bring him to Daytona next year. Race by race, day by day, Cole and Harry work at fine tuning their relationship and racing skills, bringing them one step closer to the championship. That is until Cole nearly gets killed and is forced into physical therapy by his doctor Claire Lewicki (a 22 year old Nicole Kidman, who can barely hide her Aussie accent) and forced to confront his own fears of mortality. After that he’s a wash. A man who can barely finish a race because he’s so rattled. Soon Cole is fired, Harry let go and the young race is left with only one option. Racing his rival, Rowdy Burns (Michael Rooker), car in Daytona and redeem himself one last time.

Days of Thunder plays itself by the numbers, especially for a Tony Scott film. It’s about a young up and comer who is paired with an unlikely set of ner-do-wells and old retiree’s who come out of nowhere to win the gold. It has all of the typical friendly faces. An all star cast for the 90s, a charismatic lead, the beautiful love interest who helps him get from point A to point B in the film, and the rival who ends up being his best friend at the end of the day. Well, except for the nuance and fine tuning of being a creative film. The best part of the film is easily the thrilling races and intense crashes. The movie itself is in NO WAY bad, it’s just rather derivative and well worn in it’s plot devices. Everything works together smoothly, the cast is likable, but it’s just so formulaic and predictable that it’s hard to think of it as a great film, but rather just a solid race movie.

Days of Thunder has always had a rather troubled history on Blu-ray. The 2008 Blu-ray was struck from an aging and debris filled transfer that just was never up to snuff, even back in 2008 when the fledgling Blu-ray format was putting anything and everything in HD available. Now I know this one received a separate Paramount Presents edition on Blu-ray, and I really wish that Paramount had included that new remastered Blu-ray in this set as a combo pack so I could do a direct comparison of the new Blu-ray to this new 4K UHD disc. But whatever that result is, the new 4K UHD (struck from a new 4K master) absolutely blows the doors off the 2008 Blu-ray, without a doubt. Comparing the two discs side by side it’s obvious that he new master is slightly darker without the blown out highlights that the old master offered. However, that dimness does not translate to murkiness. The image is still sharp and shows TONS more fine detail. Look at the scene near the end where Harry is “talking” to Rowdy’s car before the final race. The shadowy barn shows incredible detail, with the black paint job of the car showing up midst the shadows with a glossy shine. Tony Scott has a very unique visual style and his heavy sepia tones saturate the movie, and his use of heavy grain is definitely evident (grain haters be warned, this is one grainy flick). Colors are incredibly robust and well saturated, especially reds and oranges that garishly adorn the stock car racing scenarios. There’s some issues with chunky grain in a few spots ,and some of the darker scenes ARE a bit softer, but this is overall an good looking transfer and leaps and bounds better than my 2008 Blu-ray.

Out of the three Tom Cruise 4K UHD films Paramount released this week, this is the ONLY one that didn’t get the upgrade to a Dolby Atmos track, but rather retained the 2008 Blu-ray’s 5.1 Dolby TrueHD track. My personal suspicion was that Paramount made the decision not to do a remix simply because it was the weakest of the three films. Hey, I think that Days of Thunder only got a 4K UHD release due to being released with the other (better) Tom Cruise movies this week! That being said, it’s still a solid track and a winner for me. The film got an academy award for best sound design, and being that it’s a race car film, it’s certainly LOUD and aggressive. The mix rumbles with power and precision, tearing into the listening position with the guttural sound of engines throbbing. Outside of the race track the mix settles into a standard fare drama, with clean front vocals and a moderate amount of surround activity. The only negative think I can think to say about the track is that sometimes clarity isn’t the sharpest, and things can get muddled together with the roaring of engines in the more aggressive scenes. It’s still a solid track and does well even after though it came out at the onset of Blu-ray’s rise to the top.

Well, as I said earlier, Days of Thunder is kind of the odd man out of this Tom Cruise 4K UHD “triple play”. It’s a fun enough movie, but it wasn’t the massive hit that Cruise and Tony Scott pulled off a few years earlier with Top Gun. The 4K UHD disc, while not the most perfect looking and sounding 4K UHD discs out there, is most definitely leaps and bounds above the very aged Blu-ray master that was used 12 years ago. The video is a revelation for those of us who have been suffering along with the beaten up old Blu-ray, and even though the audio has stayed the same, it’s a very stable mix that keeps the film together. Fans of the movie will DEFINITELY be pleased, and for those going into the film, just be warned that this isn’t the peak of Cruise’s career. Solid Watch.