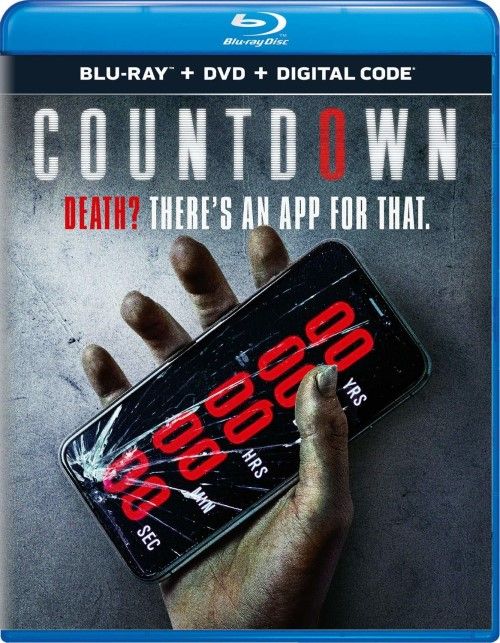 Movie
I don’t know what it is, but movies about technology related deaths just seem to fall flat. We’ve had movies about internet skype like apps causing death, webcams causing death, and now we have an app that seems to be the bringer of doom. Maybe it’s because it’s just plain ludicrous that the interwebs is some harbinger of death and destruction, but whatever it is I have steeled myself for the worse whenever I see a horror flick revolving around technology. Countdown is really no shocking deviation from the norm, delivering an underwhelming fright fest (or lack of fright fest) that is about as shocking as farting in church, and pretty much being a rehash of Final Destination, just with an app.

When looking up the app store, a group of teenagers stumble upon a mysterious app called “countdown”. Installing it on a whim they find out that it’s an app that supposedly predicts the day that you’re going to die. Most of them shrug it off as just pure garbage. An app designed to scare people and be nothing but hocus pocus, but when one of the teenagers death is only in a few hours AND her death comes true, things get a bit more serious. Segue over to a young hospital RN named Quinn (Elizabeth Lail) who has just been promoted from Intern status up to RN. A patient of hers (the boyfriend of the teenager who dies at the beginning actually) tells her about the app, and soon the hospital staff are downloading it out of morbid curiosity. Most everyone cheerily discusses about how it’s so far off, but Quinn is the only one with a clock counting down over the course of just a few days.

Shrugging it off as a joke, Quinn is soon shocked to find that the patient who clued her in to the app’s existence dies of mysterious circumstances….literally AT the time that his counter said he was. Terrified and afraid, the young woman does everything she can to get rid of the add. Deleting it doesn’t work. Changing phones doesn’t work, and to her dismay the clock just keeps ticking. Teaming up with a fellow “victim” of the clock named Matt (Jordan Calloway) she tries to find a way to defeat the evil app, even going so far as to hook up with outcast priest, father John (J.P Byrne), in her efforts to outwit death itself.

You can’t help but compare Countdown to Final Destination. The similarities are just so blatantly obvious. The app has the same rules as that movie and it’s various sequels. If you try to outwit the time you’re SUPPOSED to die, then death itself comes for you to set the balance of the universe right. However, Final Destination (as crummy as it was) is not so generically boring and bland as this one. There’s only 3 jump scare scenes in the entire film, with the rest of the movie revolving around Quinn and Matt desperately trying to figure out what’s going on. Even then, the stereotypical ending (you know, the one where everything seems to be fine and then suddenly isn’t) is so horribly mashed in that I actually busted up laughing at that final scene.

Acting wise, this is a typical low grade horror movie. Most of the actors and actresses are perfectly fine for the role, but I was really scratching my head at Father John. J.P. Byrne adds some comedic flair to the movie and he’s generally funny if you think about it, but the funniness and levity itself is so jarring in the middle of a horror film. I get cracking a few jokes, but there is NOTHING humorous about the rest of the characters or the situations. Byrne’s wisecracks and bumbling antics are so out of place and harshly jarring to the story that I actually wondered if he WAS trying to be funny, or whether I was just assuming that was the intent. It just didn’t work in the context of the movie.

If anything, Countdown does excel in the video quality. The digitally shot film is fairly neutral in the color grading department (maybe a slight blue push in dark scenes) and impeccable on the detail front. The indoor daylight shots or the shots in the brightly lit hospital are amazing. You can see every hair on Quinn’s head, and the stitching on her nurse’s scrubs. Dark shots are dingy and look typically “digital”, with some moderate noise coming in to play every once in a while. I did notice a scene of banding near the end in the abandoned hospital. The bright hospital area seems to get the best scenes, with razor sharp detail and a stunning sense of clarity that can’t be denied. Out of all the things wrong with this movie, the video quality is one thing that I can’t really deny as being great.

The 5.1 DTS-HD MA audio track is more than capable, but really doesn’t push the sonic boundaries a whole lot. The majority of the movie is surprisingly low key, with tons of dialog heavy moments and only a few jump scares. The score adds some weight with the LFE department thanks to the ominous score, and the jump scares themselves will definitely wake you up if you were dozing off. The surrounds get some activity with the sound of the demon flitting from one end of the sound stage to the other, but there are more times than I was expecting that the main 3 speakers in the front of the room where taking the brunt of the burden.

I kind of felt brain cells dying as I watched The Countdown, and I think I need to go back to school and study in hopes of somehow regaining the IQ points I lost while watching this. It isn’t a BAD movie in the sense of inept acting, cruddy writing or bad effects. It’s just so bland and boring that I was trying REALLY hard not to let my mind wander as I watched it. Universal’s Blu-ray disc is quite appealing with strong video and good audio, but naturally the extras are nowhere to be found. While I don’t think anyone would be completely horrified at watching it as a low rental, this is nowhere near a recommended status in any way, shape, or form.