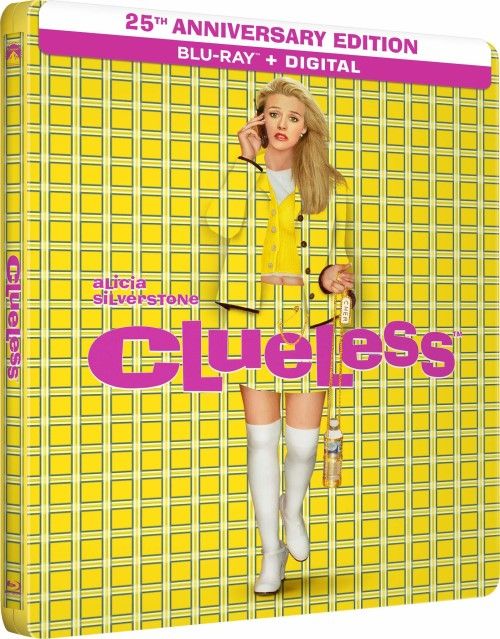 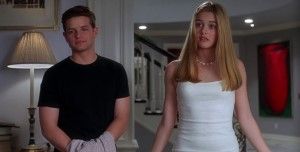 Movie
Back before there was Mean Girls, the 1990s had Clueless, the story of a ditzy high schooler who makes something of herself, and finds love in the process. The movie itself was a hilarious parody on everything to do with narcissistic 1990s sub cultures, and it just had fun lampooning every stupid line, every stupid little teenage catch phrase, and trolling the audience with the glitz and glamour of it all. It’s almost fair to say that Legally Blonde and Mean Girls took their cues from this film, even though Clueless has sort of fallen out of favor for those two in recent years. I’m not so sure that it’s unwarranted as both of those films polished and fine tuned with Clueless started, but this 1995 classic still has it where it counts.

Paramount has been releasing so many of these “Paramount Presents” films with new scans and swapping out special features that I almost mistook Clueless for one of those remasters. Unfortunately this is an interesting release. The main release (released on July 14th) and this Steelbook release (released on July 21st for some bizarre reason) is nothing but a repackage of the 2012 disc. In fact, it’s direct CLONE in every way, shape and form in everything but the packaging. The regular release gets a slightly newer cover art, while this steelbook actually gains the most value with a REALLY cool looking package. I’m not usually a nutter for Steelbooks, but the yellow and pink cover and the scrapbook style interior totally fit in the motif of the film. I mean, it IS nothing but a repackage, but those who love steelbooks while definitely find it appealing, even though there is no remaster.

Cher Horowitz (Alicia Silverstone) is a totally rad little queen of her California high school. She’s totally packing it where it counts, and EVERYONE is jealous of her. Her best friend Dionne (Stacey Dash) knows what it’s like to be the belle of the ball too, and this year is going to be the BEST. Cher decides to help out nerdy newbie Tai (a baby faced Brittany Murphy) and tries to mold her into an image of herself. That is, a totally clueless drama queen who cares only about herself. However, Cher is in for the ride of her life this year. Not only is she going to break her own rule about dating high school boys, but she is going to fall for not just one, but TWO dreamy hunks. The only thing is, one of them just may be gay, and the other one just might be her hated enemy Josh (A young Paul Rudd). Either way, she’s having the time of her life and floating through life with skills only Cher Horowitz posses.

Directed by Amy Heckerling (European Vacation, Fast Times at Ridgemont High and several other 80s and 90s classics), Clueless maintains that perfect balance of witticism and social commentary. Even the hilariously over the top attempts at infusing very single bit of 1990s slang and teenage vernacular is done so with delicate ease. Instead of feeling cheesy and dated, it feels biting and sharp, with the tone of the movie making fun of the 1990s culture as much as it makes fun of the characters in the movie.

Talking about characters, the film is nothing but a who’s who of soon to be famous actors. Breckin Meyer, Alicia Silverstone, Paul Rudd, a baby face (literally, she’s nearly unrecognizable) Brittany Murphy, Jeremy Sisto, Donald Faison, all of them barely out of high school themselves, and just on the cusp of their careers too.

The film is cute, quirky, and sometimes feels a LITTLE bit dated. Not because the plot line is bad, but because it’s been copied and re-copied a dozen times, with some of them feeling more polished and refined than Clueless. Still, the movie maintains a healthy amount of laughter, plenty of charm, and just enough cuteness to make my wife squeal with glee whenever she pulls the movie out of my collection.

Paramount is recycling the same transfer from 2012 and as such, is going to be identical in every way to that disc, visually speaking. The transfer is a bit dated by modern standards, but it still looks really good overall. It has that sort of neutral with hints of brown look that 1990s films were famous for, and it really splashes things up with the gaudy colors that Cher and her friends flaunt about in. Details are generally good, but there IS some mild filtering going on in my opinion. Not a whole lot, but just enough to soften the image a bit and just lightly soften the grain. It’s not ANYWHERE as bad as many others, and mostly just noticeable after having seen the film a dozen times. Blacks are otherwise deep and inky, and the film is really sharp and crisp. An overall nice transfer, though I DO admit to kind of wanting to see what a 4K remaster would have done if this was included in the “Paramount Presents” lineup.

The 5.1 DTS-HD MA track is another port from the 2012 disc, and it’s still sounding as good as ever. The mix is what I would describe as a “comedy” track. Meaning very dialog heavy, but still robust enough and filled with enough surround activity and bass to make it engaging. The dialog is the central focus of the track (and done well I might add), but scenes like the high school dance and the mall adding a more immersive experience with background noise additions. LFE is tight and clean, and while it is comparatively mild, it does crop up throughout the track to give a seamless and rich feeling.

• Clue or False Trivia Game
• The Class of '95 - A Look at the Cast, Then and Now
• Creative Writing with Writer/Director Amy Heckerling
• Fashion 101
• Language Arts
• Suck 'N' Blow - A Tutorial
• We're History - Stories from the Cast and Crew
• Trailers

Along with Romey and Michelle’s Highschool Reunion, Clueless was the two perfect valley girl films of that generation. They were funny and both have stood the test of time. As for whether this new edition warrants a re-purchase? Well that’s where things get a little dicey. Being that the disc in this AND the regular cased version are nothing but new artwork and the same 8 year old disc, I would really hesitate to RE-BUY the film. That is unless you’re a steelbook collector and then all bets are off, as the packaging is one of the major draws for that crowd. However, if you haven’t picked up the old release over the course of the last 8 years, then this is an easy entry into grabbing the film as it’s newer, and more readily available. Past that, I’d hold onto my old version if you already own it.

Thanks for the review. A great movie to own that is for sure.

Great cover art on this one. Hard to believe 25 years has passed!

This is a great movie. I watched it last month (had the old version), so I didn't request the new one for review. Holds up very well.

Todd Anderson said:
Great cover art on this one. Hard to believe 25 years has passed!
Click to expand...