Catching Up With StormAudio: New Product and Feature Announcements, and a Warranty Extension for MK2 Owners 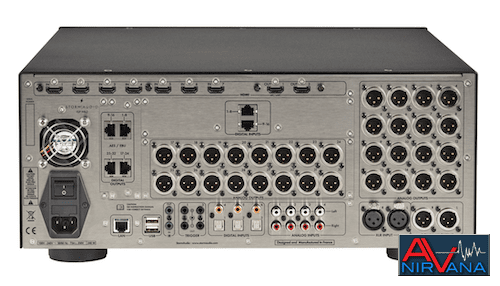 (May 6, 2021) StormAudio's big May announcements are the first of many for 2021. While we can't reveal all of the company's plans, its latest public moves reaffirm a customer-first agenda and strong support for its powerful modular platform.

First on the docket is an update to its product warranty policy, extending coverage to five years. This retroactive move covers parts and labor for all MK2 products. The company says the newly extended warranty period "embodies StormAudio's philosophy of longevity and sustainability." In addition, technical centers in France, the United States, and China offer 24/7 product support through a web-based ticketing system, giving customers access to regional help.

StormAudio has also announced an Audio over IP (AoIP) module that adds full compatibility with the AES67/Ravenna protocol on 32 inputs and 32 outputs. AoIP has traditionally been challenging to implement in custom install devices. Its introduction broadens the ISP platform's ability to integrate into professional and residential settings. StormAudio says the technology will be available as part of an ISP.32 Digital AoIP model and an AoIP upgrade module. The tech is currently being tested and should to hit the market near the end of Q2 2021.

As we've previously reported, StormAudio is also actively developing an HDMI 2.1 card with Cypress Technologies. The card, which will become available to MK1 and MK2 owners later this year, will fully support the HDMI 2.1 specification and HDCP 2.3 protocol.

On the software front, StormAudio's engineers have developed a proprietary engine called StormXT. This engine works in concert with existing upmixxing algorithms to extract relevant audio signals from nearby speakers, redirecting sound to speakers that would be otherwise silent. The company says this feature improves a sense of immersiveness while allowing owners to put every speaker in an array to work. It will be released free of charge during 2021.

StromAudio is also planning to release a new Channel Remapping feature for ISP gear. It compensates for speakers that aren't positioned in an ideal location. Like StormXT, Channel Remapping will be offered to customers as a free upgrade to existing software.

For more information about StormAudio and its entire lineup of elite audio solutions, visit www.stormaudio.com.
Last edited: May 6, 2021
Click to expand...

The big daddy of them all.
A

Do we know any details about HDMI 2.1 board developed by Cypress Technologies? Which chips do they use? Speed and detailed features?