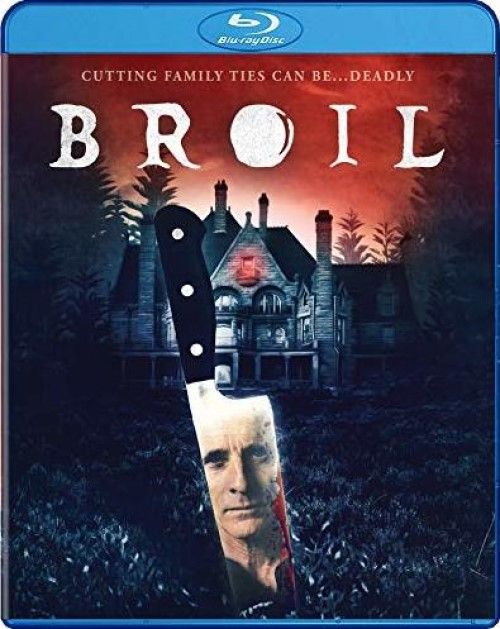 Movie
Broil brings memories of Knives Out and Ready Or Not at first glance. Telling the story of a well to do family with some “eccentric” secrets of dread and doom. However, outside of the very obvious similarities (a dinner party that brings everyone together, a gigantic game, murder and mayhem everywhere), but it lacks a sense of humor, as well as a complete lack of focus in the final act. Don’t get me wrong, I actually was really intrigued with the first act of the film, and even the second act was holding my attention rather well. The problem stems from the fact that the movie tries to tie things together WAY too quickly, and left so many obvious plot holes, while over explaining others, that it just left a very sour taste in my mouth. Which is a rather sad as the first hour is really fascinating.

Chance Sinclair (Avery Konrad) is coming nigh to her 18th birthday, and after a pact with her parents and her grandfather August (Timothy V. Murphy) she goes to live with him under guise of her violent outbursts at school. However, the real reason is that the Sinclair family holds a deep and dark curse. A curse which forces them to stay inside out of direct sunlight, and require daily blood transfusions (the German title of the film was Vampires Dinner, which kind of gives away the malady they suffer, although the film hints at OTHER reasons for their power and their curse).

Unbeknownst (or beknownst really) to August, his daughter June and her husband December (they all carry months of the year as their names) are out for blood of their own, and have hired a killer for hire known as “the chef” (Jonathan Lipnicki) who will poison the patriarch of the family, and usher in June as the new power of the Sinclair family legacy.

Broil plays tight to the chest with a lot of the family secrets early on. You get hints that they’re not who they seem to be, and even hit at things like Vampires, werewolves, and other mythical creatures without coming out and telling you. Even in the end you’re pretty sure you know who they are, but even then the answers are overly vague and leaves a bit to the imagination. Which is also the biggest flaw of the film. As I said, the first couple acts tease the audience along with hints of something more, something darker, and something more vicious, only for the final act to completely fall apart. That last half hour is a jumbled mess of trying to tie together all of the loose ends that really needed another 20 minutes of explanation to come full circle. The last 10 minutes are even worse, as director/writer Edward Drake goes full bore with end tying, leaving you with some pretty silly endings that make about as much sense as the vagueness from the first half.

I can’t say what the filming source was, nor what the resolution master was used, but I’m guessing some form of digital capture and the traditional 2K digital intermediate judging by my gut reaction to the film. Detail levels are generally very high, with strong facial tones and nuances, and the gothic looking mansion looking very textured. A lot of the film takes place in the darkness, which dims some of the details a bit and has the typical Well Go USA banding issues to deal with. Darker shots are free of most problematic digital noise, but it looks a bit murky in hallways and doesn’t always replicated facial details well. Otherwise, colors are generally pleasing, and offset an overall gray and muted look for the mansion with the brilliantly lit and colored outside world.

The 5.1 DTS-HD MA track in English was also quite good, just with one VERY obvious caveat. That being the volume level for the score. It’s mixed RIDICULOUSLY hot, and by that I mean so ridiculously hot that it causes you to nearly blow your eardrums out whenever it kicks in after you’ve adjusted to a nice and comfortable dialog level. Voices are clean and clear, and the surrounds for the antics in the house quite good. It’s just that the bass and the score itself can lift you up out of your seats and have you scrambling rapidly for the remote to turn it down until the next dialog centric bit crops up. It’s a good mix, but definitely a bit imbalanced.

I’m actually really saddened after watching the film. Broil had potential with some creepy vampiric overtones, only to fail to live up to the hype of the first two acts and utilize a 3rd act that is so jumbled and overstuffed that it just cuts the legs out of everything that came before it. Everyone did a solid job acting, but the writing and direction is really the death knell for the flick. Ah well, at least the audio and video are both rather good, but that can’t overcome the “meh” film itself, leaving me the sad job of having to say “skip it” to my readers.