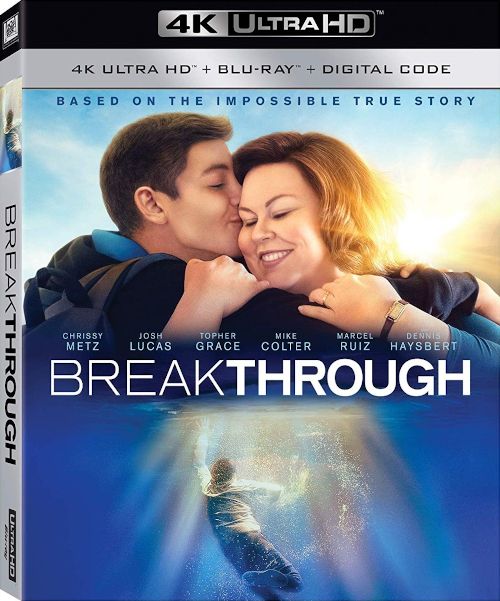 Movie
It seems like this has become sort of my usual disclaimer for faith based films. The disclaimer is that I tend to approach them with a little bit of reticence. Not because I dislike the Christian faith or anything, far be it as I’m a believer too, but because so many faith based films end up being drastically sub par as they try to pursue a message and let the acting and script writing fall by the wayside. They can be a bit cringey and overly sugary sweet, with lines of dialog meant to push a message rather than further the story along with believable interactions.

That being said, I try to approach each of these films looking for the best in them, and I was actually rather intrigued when I realized that Breakthrough was based off of a book that was writing by the real life adopted mother of the main star. Looking into articles found around the web, and looking into Joyce Smith’s book (titled The Impossible) it appears that they stick really close to the actual events. A real life boy did fall through the ice, was rescued almost 20 minutes later (usually they’re completely brain dead at that point) and against EVERY odd every conceived, was able to pull out with no ill effects. The film itself is what I would consider a “middle of the road” faith based film, as I’ve seen much worse than this, but also seen some better. It can fall into the trap of being too sugary sweet with some unrealistic dialog, but at the core of the film is a solid story about a child’s life and the mother who refused to give up praying for his recovery, no matter what the diagnosis was.

The opening 30 minutes of the film outline the Smith family pretty well. Joyce Smith (Chrissy Metz of This is Us fame) is a doting adoptive mother who just wants the best for her discouraged adopted son John (Marcel Ruiz). John is at a crisis in his life, feeling purposeless and lost midst the sea of people in the world. He still struggles with his birth mother not wanting him, and he’s also going through that middle school rebellious faze which doesn’t help matters any. When John and a pair of friends head out onto the frozen lake in their small hometown in Missouri things go south quickly. The ice cracks and the three boys are dragged into the freezing water. The other two boys are able to escape, but John is sucked into the icy depths and drowns.

The rescue team does their best, but it’s been 15 minutes since the boys fell in the lake and at this point John is presumed dead from lack of oxygen. Thinking he’s hearing his captain’s voice, one of the rescue team named Sammy Shine (Luke Cage’s Mike Colter) hears a command to double back towards the deepest edge of the whole and is able to snag John. However, John has been without oxygen for about 20 minutes, and even though he’s rushed to the hospital, doctor Kent Sutterer (True Blood’s Sam Trammell) can’t resuscitate him. Sobbing and pleading with God, Joyce begs the Lord to breathe life into her boy, and after an hour of being dead on the operating table, John gets a faint pulse. Now it’s a fight for his life as John’s prognosis is not good. Even a world renounced specialist (played by Dennis Haysbert) can’t see him surviving, and even if he does the boy will probably be severely brain damaged from being under for so long.

The rest of the film is a test of faith for the Smith family, as Joyce begs and pleads for her son’s life. Refusing to give in to pessimism, Joyce allows NOTHING to come near her boy that isn’t the best of care and the best of wishes. However, her own will is not enough, and even her husband Brian (Josh Lucas) sees how badly she’s treating the people around her in her emotional quest to save John. Relinquishing what little control she has over the situation (and her pride) to the Lord, the Smith family watches as John becomes the miracle that she was hoping for.

Breakthrough is a bit uneven with it’s pacing, and can get a bit saccharine sweet with its emotional platitudes. Joyce especially can get a bit grating as her spiritual superiority complex is on full display (something she has to deal with later on in the movie), with each of the three acts of the film feeling drastically different than each other. The first 30 minutes before the accident is your typical teenage drama with John all sullen and Joyce being cloying to her son. The second act is rather good, with the accident itself being one of the most intense and well acted scenes in the entire film. However that second act drops down dramatically with Joyce’s mawkish attempts are being a prayer warrior feeling awkward and overly played out. The last act wraps up the movie on a high note, with John miraculously recovering. It’s here that the film has a missed opportunity. They briefly touch on the idea of “why didn’t God heal my problem? What makes you so special?” for all of 2 minutes, and then brush it away quickly for the uplifting ending. Part of me sees a missed opportunity here, while the other side of me understands WHY they didn’t go that in depth. That type of question is a heavy subject in and of itself, and has been debated and discussed within the church for thousands of years (goes back to free will vs. sovereignty debates) and would require another, hour AT LEAST, to handle it properly.

All in all, Breakthrough is not a bad faith based film. The acting is much better than your average Christian miracle film due to the fact that a lot of big (or at least decent) named actors are in the production. Mike Colter as Tommy Shine was absolutely fantastic, and made me wish that more of the movie had revolved his crisis of faith vs. the Smith family’s struggle. Or at the least had given him more screen time, as his crisis was just as powerful as Joyce’s and Johns. Even Topher Grace did surprisingly well as the Smith’s pastor (I was shocked to realize he just turned 42. I always think of Topher as that kid from That 70s Show). There’s a few flaws in the production and the pacing is awkward, but it’s a solid film if you enjoy these uplifting miraculous stories.

The 2.39:1 HEVC encoded 4K UHD disc was shot on Arri Alexa Mini cameras and then transferred to an unknown resolution digital intermediate for home video (I searched and searched but couldn’t find any information on whether this is a 2K or 4K master). The film itself doesn’t lend itself to “wow” moments in it’s visual style, but it is a very pleasing 4K image and a decent upgrade over the Blu-ray. This is not a night and day difference between the 1080p and 2160p variants, but watching the two discs one right after the other shows the distinct superiority of the 4K UHD disc. Colors are sharper, details clearer, and the film looks less honey colored and more neutral with the HDR applied. The biggest increase comes from the enhanced white and black levels, as shadows and other darker scenes look deeper and richer, while the colors and outside like are more natural looking. It’s a great 4K disc all around and certainly a worthy upgrade from the Blu-ray.

Both the Blu-ray and the 4K UHD sport the same 7.1 DTS-HD MA track, and while I’m used to Fox having an Atmos track on the 4K disc, I can’t really complain as the sound design for Breakthrough is not one that you really need an Atmos mix for. It’s actually a more robust and healthy track than I initially expected, though, as the Hillsong style music comes through with resounding auditory clarity and a good low end to accentuate it. There’s a few heavy duty scenes such as the cracking and rumbling of the ice, or the helicopter taking John and Joyce to the hospital, but overall this is a dialog centric mix that puts a lot of emphasis up in the front of the room. Still, those surrounds are active with the tons of CCM inspired Hillsong music (You swear Michael W. Smith or The Newsboys is going to make an appearance) and the overall dynamics of the mix are more than excellent.

Breakthrough does a pretty good job of telling the real life story of John Smith and his prayer warrior of a mother, Joyce. It’s not nearly as preachy as you would expect, but more cloyingly sweet as the Smith’s surrender their lives and their son to the Lord, only for him to give the boy back to them in a way that flabbergasted the doctors (according to my research the doctors were absolutely astonished, as they had pegged him for a goner only for his mother to pray over him and watch his life return over the course of the next 3 days). 20th Century Fox’s 4K UHD disc is very impressive, with a great audio and video encode and a moderate amount of extras to enjoy. Recommended for those who enjoy faith based miracle stories.

Recommendation: For Those Who Enjoy Faith Based Miracles

Thank you for the review. I like movies like this and my wife likes them even more. I will rent this one.