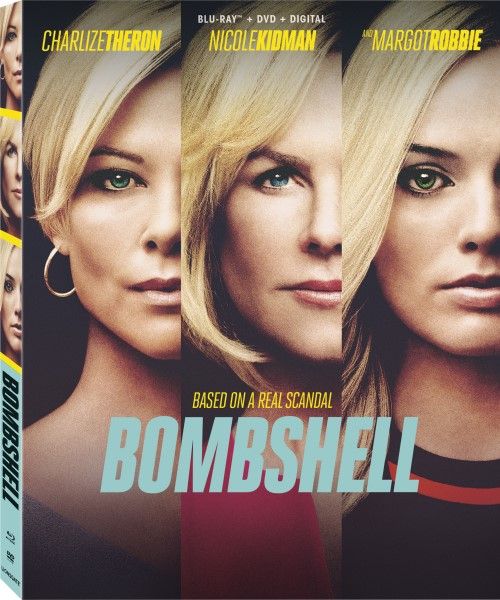 Movie
News Stations and their followings are almost as rabid as sports teams and their fans. Each of the news channels have fans that refuse to see any negative in their side’s opinions, and they all love to herald their particular flavor as “the best”. You see cars with CNN, MSNBC, Fox bumper stickers on them, and everyone is glued to their particular channel to absorb the news daily. While many people utilize multiple sources of information to absorb said news, we still have our favorites and love to play the “us vs. them” game, even if it’s only subconsciously (I catch myself doing it as well). Fox News is kind of the McDonalds of the News industry, at least in Hollywood and public circles. They’re the big bad “conservative” wolf out there, and the term FOX is used as a curse word, an epithet, and fans of the show tend to duck their heads and not say that they listen to it for the most part. However, they’re also the news station with the highest numbers, beating MSNBC, CBS, and CNN without breaking a sweat (and the numbers aren’t even remotely close either). They’re the McDonalds of the News Station being that they have a large and sweeping fan base, but very few of said fan base admit that they eat there.

After the #MeToo movement there has been a host of films that have come out against sexual harassers. People like Harvey Weinstein, a myriad of Hollywood’s elite, and even the chief executive of Fox News (as well as Bill O’Reilly) were taken down in one fell swoop. Interestingly enough, Bill Cosby, Harvey Weinstein and several other names have staid on the public’s lips for quite a while, but the name of Roger Aisles (Played by John Lithgow) was only a hullabaloo for a short time before being forgotten about. Roger was the chief executive of Fox News, having built the station into a powerhouse money making machine for the Murdoch family (Rupert Murdoch being played by Malcolm McDowell) and around the 2016 election period he was ousted as being quite the sexual creep. He had basically used his position of power to gain sexual favors from women in Fox looking to get a head (there’s a double entandre in that phrase during that movie that I won’t quote, but you get my drift). It was a big scandal for all of a few months, then it sort of faded into the background while everyone focused on other things.

Bombshell is the telling of that story from the facts we have at hand. The story focuses around three women. The first being Gretchen Carlson (Nicole Kidman), a news anchor who has just about had enough of Roger Aisles and his sleazy antics. The second is the infamous Megyn Kelly (astonishingly played by Charlize Theron) and the fictionalized “wannabe” news anchor Kayla Pospisil (Margot Robbie, who was nominate for an award with her performance). Each of the three women fall (or have fallen) prey to Aisle’s twisted demands, but it’s Carlson who gets the ball rolling. After being let go from the Murdoch empire she turns the tables on them by suing Roger Aisles personally. This act of bravery prompts countless other women to come forth and lay their own claims at the feet of the public, including Megyn Kelly and many more. 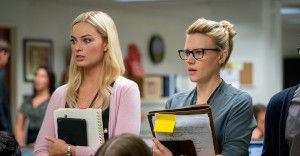 As much as it desperately wants to be edgy and smart, Bombshell has a difficult time connecting with audiences. It tires to be edgy and conceited (not using it in a negative light) by constantly breaking the fourth wall, which may work out in a dark comedy, but Bombshell most certainly isn’t a comedy of any measure. It tries to be brave and heroic in unveiling an evil villain, but it’s story and narrative structure is all over the place. I hate to bring the “P-word” (politics) into the discussion, but it has to come into play in a film about a political news channel. It’s no big secret that Hollywood is a majority on the left/liberal leaning side of the spectrum, so you can see the conundrum that they’re in when they making a movie about victims within the Fox news station. Fox is THE definition of the word “enemy” to left, and you can see director Jay Roach desperately wanting to dig in the knife and twisting it, but not being able to afford the luxury of doing so. Here is Fox News, the the most hated news channel of the left, and they’re forced to show empathy and victimhood to Megyn Kelly, Gretchen Carlson and several other big names. You can actually almost see the conflict on screen, as they try to empathize with the victims over their sexual assaults, but also not empathize TOO much with them, because…..well… It’s Megyn Kelly and Gretchen Carlson. This sort of conflicted sympathy plays off in a difficult way, as the film makes it hard to empathize with any of them TOO much. The audience has a hard time bonding with the victims/heroes of the movie, but rather watches the whole thing play out in a rather sterile fashion as Roach and the rest of the crew gingerly decide how much they can actually invest in creating sympathetic heroes out of their real life enemies, and how much they can gleefully demonize Fox and it’s internal practices that created the likes of Roger Aisles.

Acting wise, this was phenomenal. While the script and direction are a definite let down, the acting by the three main women and John Lithgow is well done. Lithgow dominates as the sleazeball Roger Aisles as only John Lithgow can (under LITERALLY pounds and pounds of makeup and prosthetics). He’s greasy, he’s slimy, and Lithgow just oozes repulsive charisma. You love to hate him, and he makes the villain that much more unlikable. Especially in his demise when you see the desperation and fear creeping over his aging face. Nicole Kidman is exceptional as Gretchen Carlson, as the veteran actress plays her to the hilt as a strong and powerful force to be reckoned with. However it’s Margo Robbie and Charlize Theron who steal the show on the female side. Charlize simply because she absorbs herself so far into the role of Megyn Kelly that I was honestly shocked at how much she looked and sounds like her. The husky voice, the physical presence, and even the inflections all scream Megyn. There’s good reason why she was nominated for best actress this year.

The final character we focus on is the fictionalized character of Kayla, a self proclaimed “evangelical millennial”. Her character is both a boon and a detriment to the movie, but artfully played by Margo Robbie. Kayla is a woman looking to get ahead in Fox news and get an on-air spot, and is forced to fall prey to Roger Aisles and his sick whims. Her evolution is the most natural and visceral of the on screen victimizations as she gets to deal with and process the aftermath of Roger’s violations. Margot pushes the envelop a bit with her story and fleshes out some dramatic moments, but I’m not sure her character was integral to the “real life” story that they were trying to tell. The fact that she’s a closeted lesbian (and has a bit of emotional connection to Kate McKinnon’s) character feels a bit pandering, even though it adds more dramatic weight to the story. I think it’s more because her particular narrative is so much more interesting than the actual “facts” of the other stories that makes it so strangely out of place. The movie is very sterile and “by the numbers” for everything else, but the fictionalized narrative of Kayla plays so much more warm and lively that it acts as a foil for the rest of the story.

Rated R for sexual material and language throughout

Shot on Arri Alexa cameras and finished at 2K for the digital intermediate (according to IMDB at least), Lionsgate presents a rather striking 2.39:1 framed AVC encode for the Blu-ray. The disc is rather striking, with strong colors, sharp details, and a host of various shades depending on if the film is in a shadowy news room, or in a brightly lit daylight shot. There’s some mild banding in said shadowy news rooms, as well as some mild digital noise, but otherwise the image is very sharp and well textured. The incredible amount of prosthetics and makeup used on Charlize and John Lithgow aren’t overly obvious, and the slighty warm and honey colored grading to the color hue is very soft and minimalistic. It’s a good looking disc and probably the single best part of home video package.

Wow, I don’t think I’ve seen a major studio release without lossless audio for quite some time. I’m not sure whether it is because Lionsgate was running out of space and didn’t want to spring for the extra few cents to switch to a BD-50, but the single layer BD-25 Blu-ray is given a lossy 5.1 Dolby Digital track for the drama. It’s not a horrible track, but it is most certainly thinner and less impactful than other dramas of it’s ilk (especially after just watching Dark Waters). The bass is a bit anemic, and the hustle and bustle of Fox News is muted and very thin. Dialog is well placed and vigorous, but the entire track is just muted on the dynamics, even considering the fact that it IS a simple drama.

​
Bombshell wasn’t a box office “bombshell” (sorry, I couldn’t help it) but it is a reasonably entertaining #MeToo story about one of the biggest, yet most forgotten, story in the last 4 years. Personally I feel Russell Crowe’s miniseries The Loudest Voice did a better service to the story than Bombshell did, but it is a reasonably well rounded drama and certainly very watchable. As a more conservative leaning viewer (who actually dislikes Fox) I was bemused by the obvious dilemma the writers and director were in WHO to actually lionize in the film, but all in all the film is a decent watch. Lionsgate’s Blu-ray is solid enough with great video, but a surprisingly disappointing audio mix and mediocre extras. Rental

Thanks for the review. I am curious on this movie so will take a look when it is available on amazon prime/netflix.

I missed this in theaters.

Okay. I’m going to stop saying that. I skipped it in theaters because I’d rather watch in my theater.

That being said, this has me particularly interested, as a former founding staff member of the Fox News channel. I’ve seen exactly how they operate from the inside. I know exactly the thought process, game plan and execution of just how they set after those ratings number and how they got them. I know how they have historically treated women behind the scenes.

This will be interesting, to say the least.