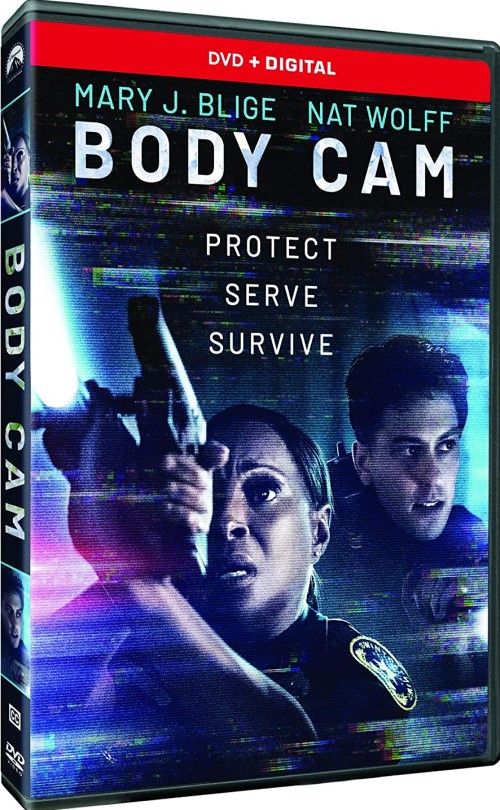 Movie
With all of the social upheaval over police officers splitting the nation, it’s not a surprise to see a movie take advantage of that narrative, and play with it a little bit. Racial/social/caste issues are ALWAYS hot button items that tend to polarize people’s opinions, but putting that sort of thing into a horror movie is a bit of a different twist. Especially when it’s a horror movie that doesn’t attempt to slap you around with it like The Hunt (as much of a parody as that film is), but rather just uses that as a back drop to introduce a horror monster who does nothing but wreak bloody vengeance on those who have wronged it.

I will admit that the first few minutes of the film had me rolling my eyes as the film sets up a serious of nationwide covered “cop on black man” shootings that have turned the every day people against the boys in blue, even if they deserved it or not. The opening shot has officer Kevin Ganning (Ian Casselberry) getting turned away from his local diner due to his badge, and heading straight out into a rainy night stop that ends up getting him killed. The film jumps back 12 hours to when officer Renee Lomito-Smith (Mary J. Blige) comes back to the force after suffering some emotional and job related trauma that has kept her off the force for 8 months. Looping back to Kevin’s death, we see Renee and her rookie partner Danny Holledge (Nat Wolff) stumbling upon the incident and the carnage that ensued.

What seemed like a simple case is actually much more complicated, as Renee watches Kevin’s body cam footage and notices what seems to be a supernatural being in the background. Unfortunately nobody believes her as the body cam footage magically is erased by the time other officers appear on the scene. Putting the clues together bit by bit, Renee attempts to track down a powerful force that is killing officers on...well… the force and uncovers a conspiracy that dates back several years and very well may hold the final piece of the puzzle in regards to the gruesome murders that are unfolding today.

Putting social issues in horror movies is nothing new. In fact, horror movies tend to be able to interweave social issues much more seamlessly than regular dramas simply due to the fact that the “in your face” murders and gore of the films distract the viewers just enough for them to forget about the underlying themes, but not so much that the theme is lost completely. It’s a brilliant technique in the genre, but sadly Body Cam is not one of those brilliant films. Instead it is a turgid affair that just wreaks of bad writing, bad acting, and actors who are so obviously bored with the project that they can barely keep their eyes open. I mean, David Zayas and Anika Noni Rose do their best with the tools that they’re given, but Anika is sadly side lined most of the movie as the mysterious thread that Renee is tracking down. Her character and story had a ton of potential to be fleshed out, but director Malik Vitthal relegates her to a few zombie like scenes where she stares blankly at the camera, and then returns to Mary J. Blige looking through dark hallways with her flash light and gun.

Sadly that’s one of the most frustrating parts of the movie. The gore is something that would make even Candyman wince with discomfort, and gore hounds may get a kick out of the death scenes, but the rest of the time we’re just left watching Mary J. Blige wander around darkened hallways and actors spout off dialog that would make a first year writing student cringe.

Rated R for bloody violence, grisly images, and language throughout

The 2.39:1 framed image in 480p does well enough for itself as a low budget horror film, but also comes with the caveats of that moniker as well. Fine details are usually good, and things like contrast and skin tones are nicely balanced. The most noticeable issues stem from some obvious digital noise due to the low light scenario and some softness and crush in the blackest of scenes. When light is applied to super dark shots you can see some smearing in the shadows as well. There’s a very heavy blue tone to the film, and even the daylight shots are never THAT bright due to the blue filter. It’s a solid enough looking film, but not a looker by any stretch of the imagination.

The audio fares about as well as the video does, and maybe even a slight bit better. The track is done excellently enough, with good surround activity (what horror movie would be complete without great surrounds) and the vocals are crisp and cleanly located up front. The budget of the movie DOES come through a bit with some thinness on the gunshots (e.g. they sound more like actual gunshots than deep bassy cannon sounds) and there is almost a blandness to how the sound is mixed. It’s not great, it’s not bad, it just is a solid all around track that doesn’t stand out. 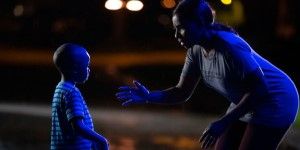 I was initially thinking that the political issues with the “cops vs. civilians” angle was going to be the worst part of Body Cam, but I was sadly mistaken. In fact, it’s hardly that much of an issue as the technical and story aspects of the actual HORROR portion of the film are so mishandled that the social issues are the least of the film’s worries. If you like watching a few nifty gore scenes (including an incident in a convenience store that was amazingly staged) you might get a kick out of the film, but otherwise I would just skip the film entirely. The relegation to 480p does the film no justice either, with mediocre video and audio that are only just satisfactory. Personally, I’d skip it.