Just received one of these last night and hooked it up. Basic listening and use will be fully explored throughout the holidays. 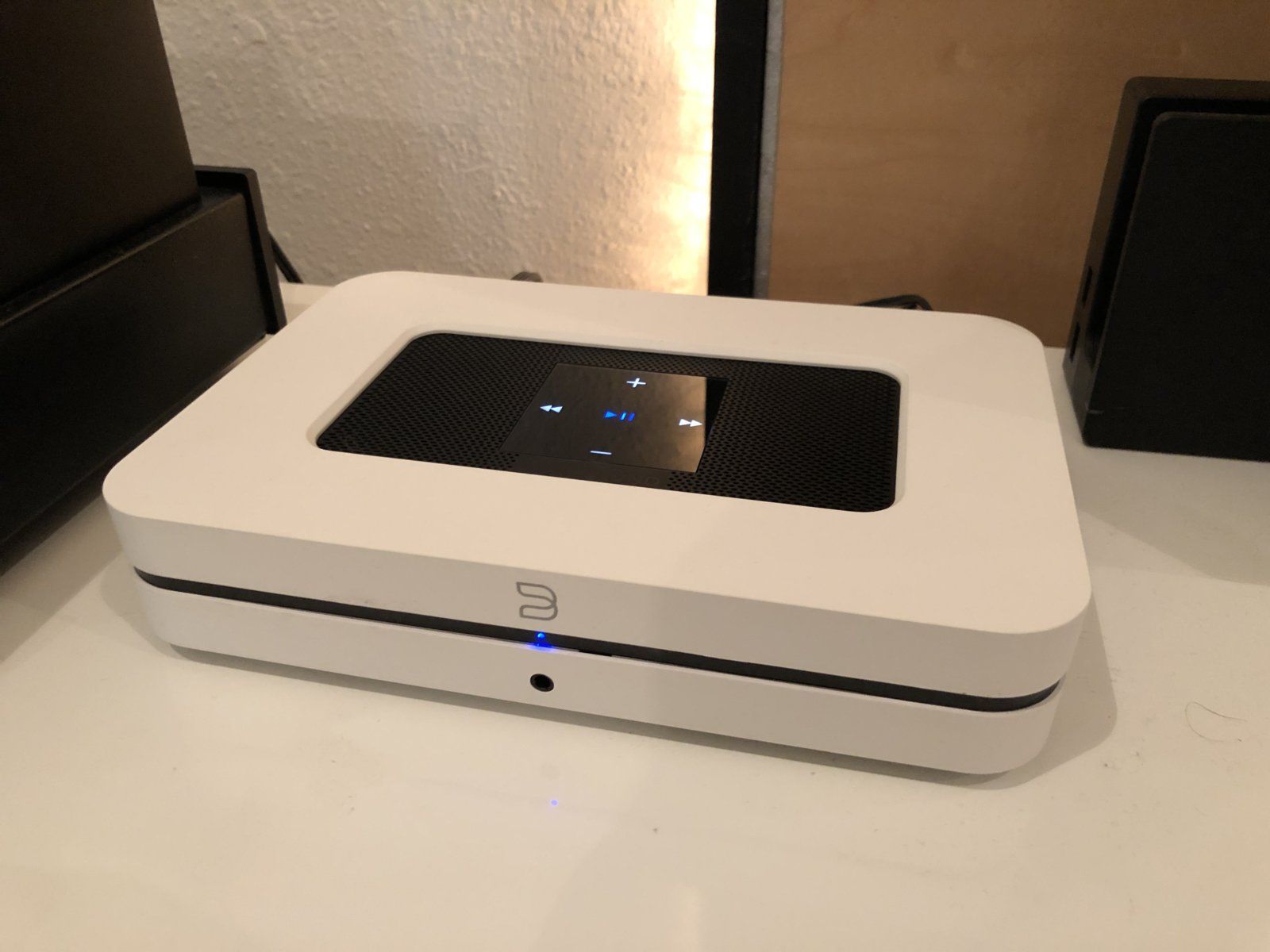 I have a full theater downstairs, and a 2-channel setup upstairs. The 2ch setup is very basic, and sounds great, consisting of a ProJect turntable, a Cambridge Audio phono preamp, a Jolida tube amplifier and a pair of Definitive Technology BP20s.

I’m pretty busy, so I don’t have time to do a ton of what you might call “critical listening”. When I do have that time, it’s vinyl. Perhaps a better way to put it is that vinyl forces me to sit down, slow down, relax and enjoy music.

So, while I’ve always enjoyed my 2ch setup, it’s in the middle of an open floor plan main floor right now, and I have been looking for the right device to allow me to stream background music through that setup to have something playing while I’m doing other things around the house.

I finally settled on the Bluesound Node 2i. It was a little more than I had hoped to spend, but it also offered a couple extra features that I expect will give me more use out of it. 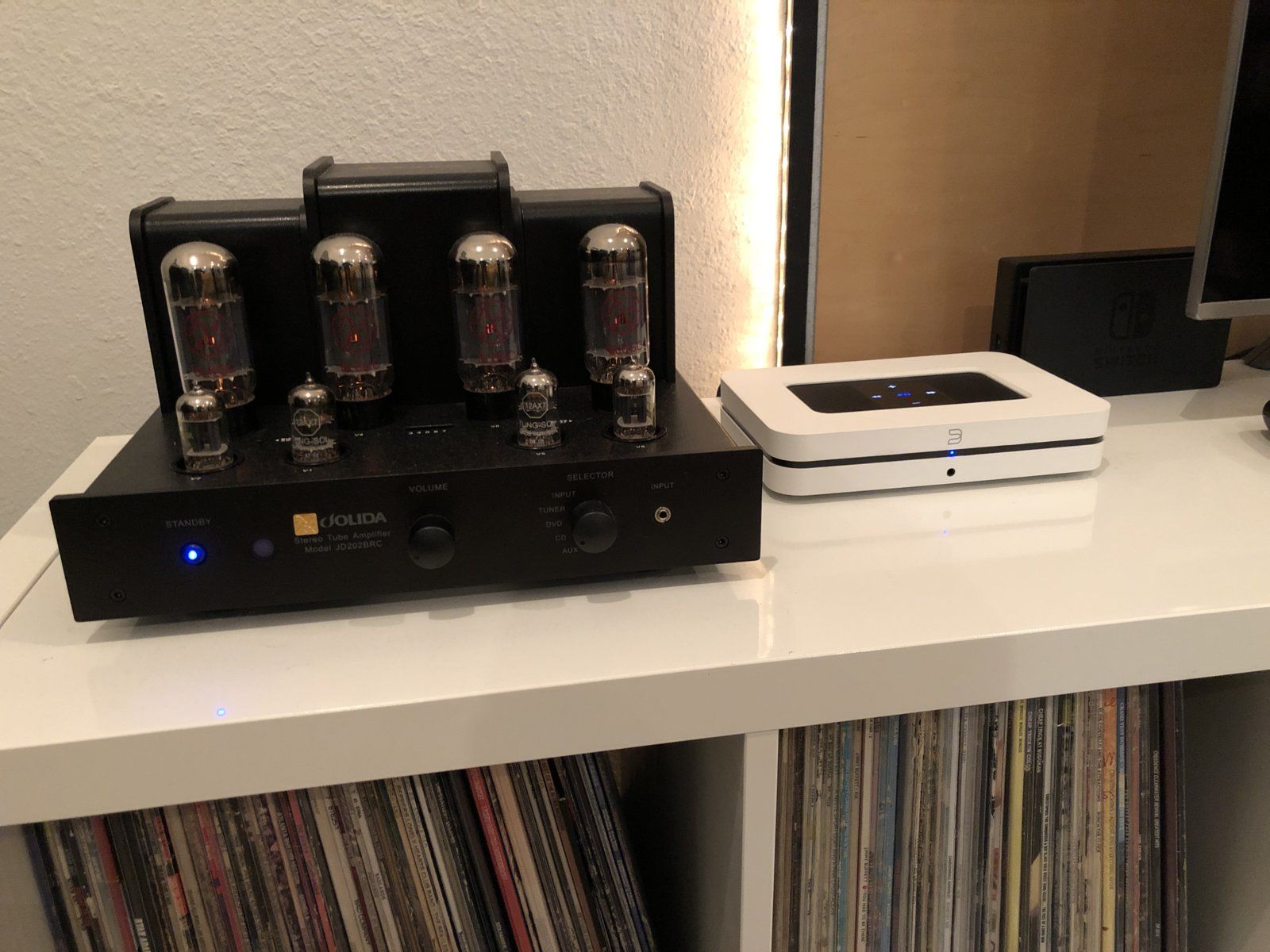 It arrived last night. I’m not sure why I’m surprised anymore when a product arrives and it is well-packaged and presented (thanks, Apple!).

It was very easy to setup, and included all cables necessary for my use. Using the app to get the device connected to my wifi and download an update to the BluOS software took about 5 minutes, tops.

With the whole family home and hanging out, I didn’t take time to play with it too much, we turned on Christmas Vacation on the AppleTV4K and I immediately tested out one of the bonus features of the Node 2i - AirPlay.

I had originally been looking just at cheap Bluetooth receivers, but the Node caught my attention because its AirPlay capability will allow me to stream my television to it as well, to play content on the speakers (I had been casually looking for a Bluetooth receiver with an optical input as well, for this capability, but AirPlay is easier).

That being said, it connected really easily, but I don’t see it being used much for that purpose, as the BP20s aren’t great for localizing TV audio. But that’s the speakers, not the Node.

So far, the sound quality is top notch, and I’m enjoying the Calm Radio stations. All of the Internet radio options are the other thing I think I’ll find very useful. So far, they’re my favorite part.
I’ll check back in after the holidays to give my thoughts after a full run through the paces.
Last edited: Dec 18, 2019
G

I had the chance to buy a BlueSound Node 2i from someone in LA for $300, which was 2 months old, and I didn't buy it. I regret not buying it, but it's was not save (WAF) for me to come home with another audio device. I think for the money BlueSound is possibly the best music media streamer at the moment. However, I have been pondering about building a Raspberry Pi music streamer. Let us know how you like it. I like mine, but there are several thing I do not like about the BlueSound App such as being unable to shuffle your playlist. Or the BlueOS Windows controller only showing the first 30 songs of your playlist. In order for you to see the rest of the music, you have to click on the bottom right list icon, which brings a separate window with your playlist. It would be so much better if BlueSound supported the Tidal app and all of its features.

Looking forward to hearing more about it!
G

@gfoOviedo
I just recently (last week) replaced my ailing turntable and am in the process of writing a review on said turntable. I agree with thrillcatthat it is a medium that demands the attention of the user and focuses the music experience.

But you are correct.... vinyl could be a very expensive addition your hobby if you do not already have any collection of vinyl to start with!

On the other hand... I’m looking for a competent streamer/dac and the Bluesound Node 2i may just be the ticket so I’m loving the information Thrillcat Is providing us!

Just to check in, it’s funny. I bought this thing to use Apple Music and AirPlay, but I’ve hardly done that at all. I’ve been digging into the Calm Radio stations and there are some fantastic things there. The Bop Jazz station, Eclectic Lounge, good stuff.

hard pass on the “Cats Purring” station tho. Our cat is already enough of a grump.

More in-depth feedback after the holidays when I’ve really had time to test things and critically listen to sound quality.

So far, though, I can absolutely tell you I would whole-heartedly recommend it. I picked up an authorized refurb for $100 off on eBay. Other than markings on the box itself it seems like new.

Really enjoying it so far.

And yes, vinyl can be expensive, but worth it. It makes it easier that I never sold off my collection. To have a good base selection to choose from makes it easier to not have to make a huge investment in albums to get past the “I spent all this money on a turntable and I can only afford 3 records” phase.I’m also not real picky. I love the $1 bins and spend most of my time digging through those instead of the new releases.

Just to check back in on this. The sound quality really is great. Zero complaints.

Seems like I have to unplug the power and reboot about once a month due to it not being connected. No biggie.

I did the Tidal MQA trial, and accidentally forgot to cancel, so I have it for a few more weeks. It sounds great. It really does. But not great enough for $20/mo. Sorry. And the app isn’t great for finding things. So I’ll let that one go for now.

I do wish the BluOS app would put the transport controls on my iPhone’s lock screen, however, like most media playback apps do, so I wouldn’t have to unlock my phone and open the app just to skip a track. I guess I haven’t explored the Siri integration yet. Perhaps that’s a possibility, which would be fine with me.
G

I use Tidal with my iPhone XR, and I don’t have to unlock my phone to skip tracks. In mine a small window shows up that has the name, volume control, fast forward/reverse, and skip back / next.

GFOviedo said:
I use Tidal with my iPhone XR, and I don’t have to unlock my phone to skip tracks. In mine a small window shows up that has the name, volume control, fast forward/reverse, and skip back / next.
Click to expand...

Are you using AirPlay to send it to your device? Because with the BluOS app, it hands the stream off directly to the Node, whereas Airplay keeps it running through the phone.
G

So how are you connecting the Tidal app to the Node?
G

Via Ethernet wired. I had it via WiFi before. I use the BlueOS app.