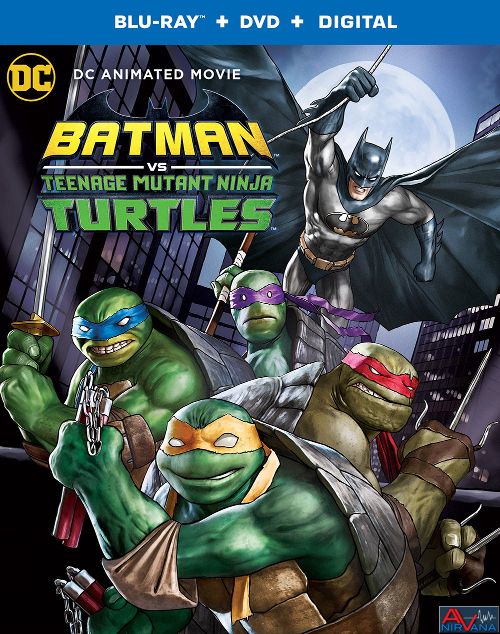 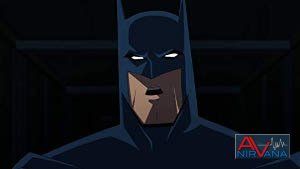 Movie
Wheeeeeee! I feel like a 12 year old kid again! Mash-ups and crossovers are nothing new in the world of comics, but they can be a dicey thing. Blending two different comics with two different tones doesn’t always work out, and sometimes the results are…..well…less than good. However, how can you go wrong when you blend the world of Batman with the Teenage Mutant Ninja turtles? It’s just BEGGING to be done as both of them are rather down to earth comics, with superheros that use martial arts as their main weapons, and have crazy villains. Well, color me ecstatic when I saw that Batman vs. Teenage Mutant Ninja Turtles was coming to home video and dug into the disc as soon as it arrived. Well, the results are pretty much what I expected. A blend of humor and sarcasm fighting against the strict darkness and brooding of Batman, ending up with a mildly uncomfortable, but totally hilarious, fun romp on the wild side of Gotham.

Gotham is undergoing a series of robberies over at all the high tech firms (seriously? what’s new in Gotham?) and Batman (Troy Baker) is hot on the heels of the mysterious villains. He’s figured out that the criminals all appear to be practicing the art of Ninjutsu, but his suspicions are confirmed when a group of “Ninja” turtles come on the scene. Figuring them for the bad guys, Bats swoops in only to come face to face with Michaelangel, Leonardo, Raphael and Donatello. After a bit of fisticuffs the two rival super heroes realize that they have a common enemy. Shredder (Andrew Kishino) has actually teamed up with Gotham’s oldest enemy, Ra’s al Ghul (Cas Anvar) in order to unleash a plague born of the Joker’s gas and the infamous ooze, and now the world’s most brooding super hero has to team up with the most irreverent group of teenagers in order to kick their collective butts back into shape. 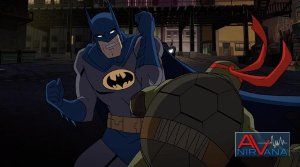 Batman vs. TMNT (shortening it to TMNT for the rest of the review for expediency’s sake) is a bit of a different film than most of the other DCAU films. It’s not in the New 52 lineup artwork and style wise, and it veers away from the Bruce Timm style of Batman as well. It’s kind of it’s own little thing, and it’s a whole lot of fun to watch. The animation style is a bit funky, and leans more towards the newer Turtles animation more than the Batman works, and I’m not a WILD fan of the chunky and blocky look, but it works. The movie is a hybrid of two styles and director Jake Castorena does a good job at pitting both styles against each other with humorous results. Batman gets frustrated at the Turtles lack of discipline, and they poke fun at him being the stodgy and brooding dark knight with good results.

The real fun is the fight scenes, and boy there are a lot of them. Batman and Shredder actually have a really incredibly done martial arts fight at the beginning of the film that’s really had to top. I was actually impressed at the movement and attention to detail in the fight choreography for an animated movie. The end battle with Leo and Ra’s, or Shredder and Bats is almost as good, but that opening fight scene is REALLY something to behold. The center act has some bloat, as Batman, Batgirl and Robin team up with the Turtles and fight The Joker (also played by Troy Baker) and some Arkham loonies. It feels like filler, and that’s exactly what it does. It kind of allows the Turtles and Bats to blend their styles together, but if you look back at it objectively it was just to bloat the run time a bit.

I was a bit surprised by some of the darkness in the film for being aimed more at the younger audience. The whole tone and feel was much more Bruce Timm and Turtles by nature, complete with some cheesy “lets work together!” lines and lots of humor. But then it would be punctuated by moments where Ra’s and Shredder are beheading prison guards, or someone gets their arm brutally broken in combat. It wasn’t a HARD PG-13 or R, but those moments of brutality would come out of nowhere and surprise you after giggling and chuckling at Mikey cracking jokes all the time. 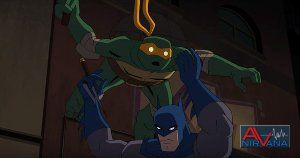 The 1.78:1 framed AVC encode is excellent considering the low budget animation style used for the film. It’s a good encode that is cleanly animated, has sharp details, but naturally falls victim to only one major flaw, and that is the one that plagues 99% of the DCAU films. Banding. There’s some decent banding in the darker shots and while it’s never problematic, it is noticeable as I’ve been conditioned to always expect SOME banding with these DCAU films. The colors are fairly cool and dim, but there are some standout splashes such as Ra’s al Ghul’s bright great outfit, or the splashes of color inside of Arkham Asylum when the Joker goes nuts with the ooze. Black levels are really strong, and once again, the only issues with them stem from the baked in banding from the source encode. 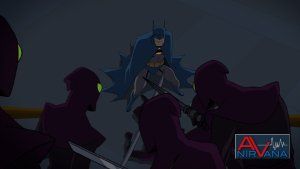 The 5.1 DTS-HD MA track found on both the Blu-ray and the 4K UHD disc is pretty much par for the course for the Warner DCAU films. It’s powerful, aggressive, and makes good use of the surrounds with all of the action and fisticuffs going on. The roar of Batman’s batmobile throbs and rumbles on the low end, and the sound of feet and fists impacting on badguys makes good use of the LFE channel as well. The surrounds get fully utilized with bodies whizzing by the listening position, and the overall balance of the mix is solid. It’s not OVERLY nuanced, but the dialog is clean, the surrounds and low end are well used, and it checks all of the ticks for a good action track on a budget animated film. Thumbs up all around.

Batman vs. TMNT had the opportunity to be a lot of fun, or it had the opportunity to be a botched crossover, but luckily the former was what I found upon viewing. The movie is lighthearted, full of energy and poked a lot of fun at both series’ common foibles. There was bit of a slowdown in the center act of the film, but luckily it picked up right after the heroes left Arkham to face off with Shredder and Ra’s al Ghul. The Blu-ray is a great looking and sounding disc with a decent array of extras.. Definitely worth it as a fun watch if you’re a DCAU fan at all.