Since October of last year I've been toiling away on my biggest-ever ESL speaker project, and I'm very happy to be nearing completion after 5 months of exhausting work.

Several of my Carver Audio friends have twisted my arm for years to build speakers for them, but until now I've declined because my designs are exhausting builds, especially for an old guy like me. My friends prefer my lightweight OB hybrid speaker because it's prettier and easier to transport than my other designs. I must have bumped my head somewhere because I finally agreed to do it.

I'm building four (4) pairs of the OB design which uses a 12" woofer mounted on a modified H-baffle. The frames are red oak and the stat panels use segmented wire stators which electrically bend the wave front from planar to cylindrical. Bending the wave front is accomplished using a stepped-frequency/phased-array of (15) wire groups which drive the diaphragm sequentially from the panel centerline outward.

Below are a few build pics and three videos showing the stator/panel build process and a completed speaker.

That is incredible. I am so jealous. Congratulations. Do the videos go into more detail about electrically bending the wave front?
J

In the videos, I don't go into the electrical segmentation scheme. You might notice in the stator build video that each panel has (15) wire loops extending a few inches beyond the end of the panel. These wires connect to a segmentation resistor network. The panel has 90 wires arranged in 15 groups of six wires. The center 6-wire group connects directly to the amplifier interface to receive the full powered bandwidth above the crossover frequency. The left/right paired six-wire groups on either side of the center group are powered from the center wire group. Moving toward the panel edges; each successive wire group is power from the previous wire group (a transmission line).

When the radiating area of a driver is wider than the wavelength of the frequency being radiated, that frequency tends to remain a planar beam rather than spreading out in space. That's why tweeters are made small and not wide, and conversely; why a big flat panel is so ultra-directional.

In an electrically segmented wire-stator ESL; the wire groups are powered separately with different frequency bands, such that the widths of the radiating areas on the diaphragm are always less than the wavelengths being emitted from those areas. For example; in my speaker the top octave is emitted only from a narrow vertical band in the center of the panel (i.e... the area driven by the center wire group).

Consider that a capacitor in parallel with a resistor in series creates a first-order low-pass filter, with a cutoff frequency determined by the values of the capacitance and resistance. In the case of a segmented wire stator; the series resistors inserted between the wire groups couple with the capacitances that exist between the wires and between the wires and diaphragm, to form a series of low-pass filters that progressively chop off the upper frequencies, toward the panel edges. In addition to attenuating frequencies; the charging times of the successive wire group capacitors attenuates phasing toward the panel edges as well.

One of my mentors on the DIY Audio Forum created an Excel spreadsheet program for designing segmented panels, which I used to devise the segmentation scheme in my panels. I just plug the required inputs in the spreadsheet (i.e. panel dimensions, diaphragm-to-stator gap, biasing voltage, transformer step up ratio, number of segments) and the program calculates the resistor values, max SPL, upper cutoff frequency, and graphs the frequency response curve.
Last edited: Mar 22, 2020
J

All four pairs of speakers are fully completed except for the magnetically attached grills, which I'm building now.

I spent the weekend sound testing every pair, and they all play to ridiculous volume with no apparent issues. For a $77 woofer; I'm pretty impressed with the Peerless SLS-- I was concerned it wouldn't be up to the task so I only ordered one pair initially. I should point out that so far I've only sound tested with the woofer chopped off at 60Hz and crossing into a pair of Ripol subs with a 24db filter slope. Thus unloaded on the bottom end; the Peerless woofers rock pretty good without bottoming out at X-max.

Parts Express had the black grill cloth but not the burgundy I want for my pair-- so I was happy to finally locate some 66" x 36" burgundy cloth on Ebay. That order arrived yesterday and it's only 54" x 36". With the Corona virus lurking and me old as dirt, I'd rather lose the refund than risk the post office to ship it back.

Just one more delay in wrapping this project up...

In the meantime-- here's some eye candy for the planar pervs: 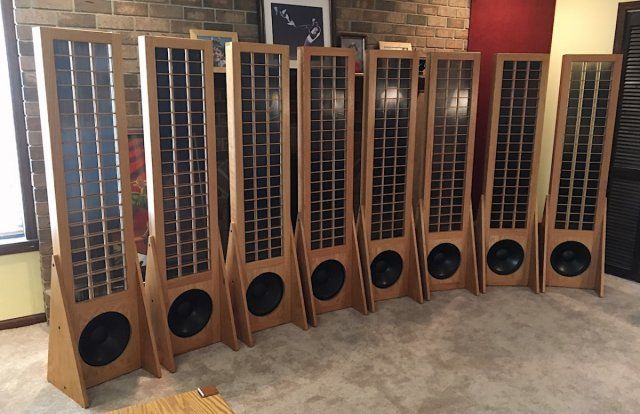 With magnetic grill on: 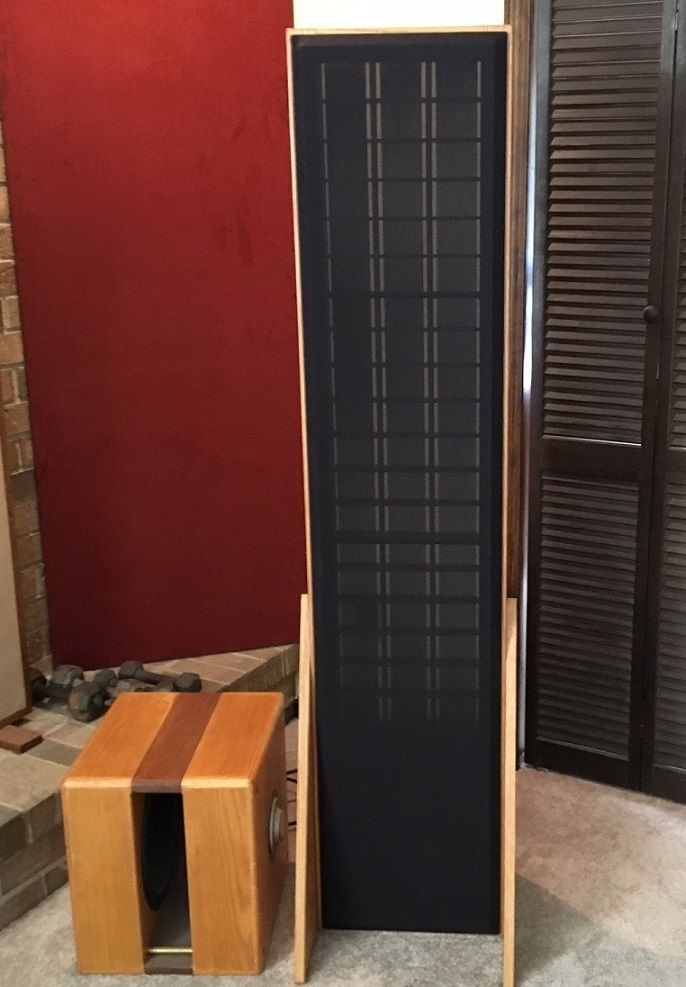 This project (all four speaker pairs) is finally completed, so this will be my last post on this thread unless it's in response to others.

I resolved the issue with the grill covers bowing and they turned out gorgeous.

I finally now have my dream speakers for life, and I'm sure the recipients of the other three pairs will feel the same way.