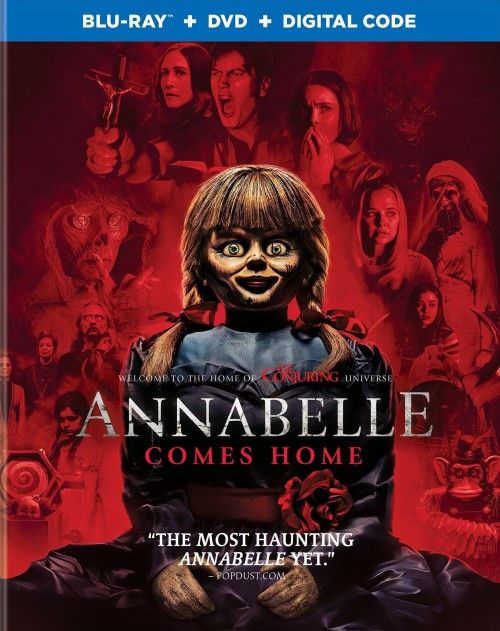 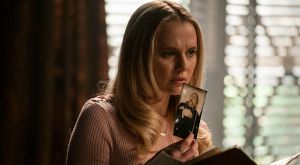 Movie
I’m still amazed at how much traffic the Annabelle movies have gotten over the years. The Conjuring was a smash hit that no one saw coming, and the first Annabelle movie was kind of seen as a joke. A spinoff based off of a creepy doll shown for a few seconds in the background during The Conjuring. Yet Warner Brothers has not only made a full world building franchise out of The Conjuring movies (number 3 is on the way soon), but also 3 full Annabelle movies, as well as a few little off sprouts such as The Nun and The Curse of La Llorona. I’ve actually enjoyed the Annabelle movies out of all the spin offs, as they’ve been continually creepy, if not a bit rote, and pretty much pure popcorn jump scare fun. Nothing wild, they’re not going to turn the horror industry on it’s ear like the original The Conjuring, but they’re goofy fun and the last Annabelle movie was actually REALLY creepy. This third outing, though, acts as a prequel to The Conjuring, explaining how the doll ends up with the Warrens (played by Patrick Wilson and Vera Farmiga), and is a little more cookie cutter and family friendly than the other two (although it does feature the Warrens themselves, almost making it feel like a Conjuring movie more than an Annabelle one).

Ed (Patrick Wilson) and Lorraine Warren (Vera Farmiga) have just come into possession of the Annabelle doll for the first time (the first two films were prequels to this, and this being a prequel to The Conjuring in its time frame) and after a short stint with it’s demonic powers, realizes that it is a beacon for evil spirits. Locking the doll up in a glass chest made from the plate glass from a church window, they have contained the evil power of the doll, and keep it away from the rest of humanity. Some time later they leave their daughter Judy (Mckenna Grace) with their normal babysitter Mary Ellen (Madison Iseman) for the evening, which unleashes a chain of events that will teach the young girls, that some things are hoaxes, and some things definitely are not.

All is going well, with Mary Ellen and Judy prepping a cake for the young girls upcoming birthday (which no one seems to want to go to due to her parents creepy spiritual escapades in the local news), but soon things get out of control when Mary Ellen’s friend Daniela (Katie Sarife) comes over with an ulterior motive. Her father has just recently died in a car accident, and the poor girl is stricken with grief believing that it was her fault. She figures that by going into the Warren’s “evil” little study den of spiritual trinkets, she can somehow talk to her father and get some closure. BUUUUUUUUUT, the doorway that she opens is the wrong one, and soon the doll Annabelle is free from it’s enclosure, and coming with it are all the evil spirits from beyond that are attached to her like a beacon. 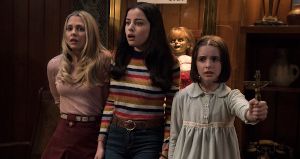 Annabelle Comes Home is a fairly tepid film, and is a bit softer than either of the previous two films as well. Both the previous Annabelle movies have relied strongly on bloodless demons, jump scares, and a fairly soft plot, but this one is almost a family friendly scare fest, even with the more exciting third act. The first act is completely benign, as we watch Judy, Mary Ellen and Daniela hanging out and having fun, with just brief glimpses of the creepy doll’s face to create some semblance of scariness. The 2nd act takes off a bit more once Daniela accidentally opens the doll’s cage, but still, there’s not a whole lot going on. We get more backstory in Mary Ellen’s latest crush, Daniela’s dad and Judy’s issues at school than we get scares. It’s not until the third act when the demons come out to play that things get exciting.

Still, there’s very limited scares here. What scares are in the film are relegated to mild jump scares, or the audience being able to see a demonic spirit over the back shoulder of the characters (unbeknownst to either of the three girls), culminating in a finale which is over with a little bit too fast, with a little bit too little personal sacrifice. In fact, the Annabelle Comes Home actually ends on a really high note, instead of the typical twist ending where something horrifying happens. As such it really is not the scariest of the three Annabelle films at all, and while it IS competently acted and directed, the lack of thrills makes it probably the most boring too. 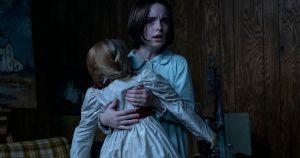 Annabelle Comes Home comes to Blu-ray with a good looking 1080p encode from the digitally shot film, and results are rather nice. There’s some digital noise that swarms ever so slightly, but the period piece film is never so noisy that it’s annoying. It’s just more of a background issue in the fairly dim looking film. Period piece colors lean towards the yellow end of the spectrum, giving it that 70s vibe that we all know and love. Fine details are very good to great, with the lines and curves on the doll face perfectly clean and precise, while the pastel looking clothing showing intimate details and wrinkles with ease. Blacks are good, but do show some crush now and then, and shadow detail is comfortably typical of the film type.

No horror movie is complete without an aggressive audio mix, and Warner’s Dolby Atmos track certainly gets the job done. The mix is pretty much a mixed bag in terms of output level, content to have long periods of quiet, dialog driven, exchanges only to switch things up and hit hard and fast with the jump scare scenes. That’s not really a knock on the track itself, but rather an analysis of the differing styles within the film. Quiet, front heavy, dialog scenes, and then suddenly the track takes off with incredible waves of bass and all sorts of surround activity as the spirits flit throughout the house. Atmos effects are moderate, mainly enhancing the scare scenes with some creaks, groans and other “scary” sounds stemming from the Warren mansion.

• Deleted Scenes
• Featurettes:
-- The Artifact Room & the Occult
-- The Light & the Love
-- Behind the Scenes: The Ferryman/Demon, The Bloody Bride, The Werewolf

I rather enjoyed Annabelle Comes Home, but it obviously is showing the seams and weaknesses of having a film franchise based off of a one off creepy doll shot in another film is wearing thin. The audiences seemed to agree as this was the lowest grossing Annabelle movie yet too. It isn’t that it’s a BAAAAAAAAAD horror movie, it’s just that it’s not the most exciting, bloody, or scary cookie cutter film in the box and that may turn off some audiences. The Blu-ray from Warner is very solid, with modest extras and good technical specs. Solid Enough Rental.

Thanks for the review. Will watch it once on amazon prime/netflix.

Thanks for the review. I may buy it since I own the other two and also own The Conjuring ones.

Ok I just bought it. I had a $13 dollar credit that I applied towards it so I can't go wrong lol.

reality is, while it's the weakest of the series, it's NOT a bad movie. just one that's a little lacking in scares. If you liked the first two Annabelle movies I don't think you'll be revolted by this one

Yup especially during this time of year. I am sure it won't disappoint.

I liked this one too. I agree it did not have much jump scares but the film was really eerie. The SQ was really good too. There was some scenes were the bass flexed the walls.
You must log in or register to reply here.
Share:
Facebook Twitter Reddit Pinterest Tumblr WhatsApp Email Link