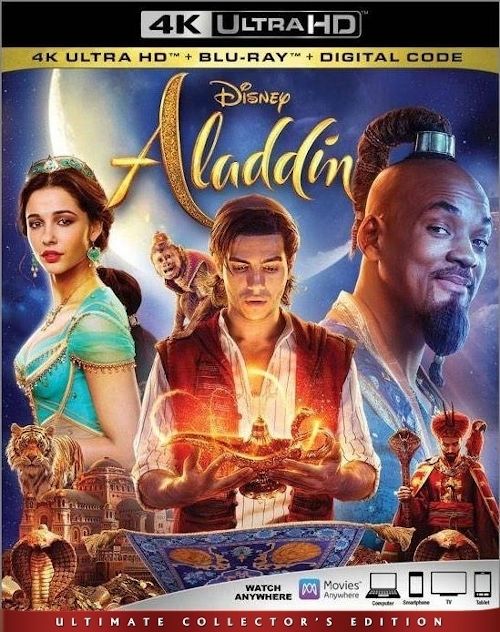 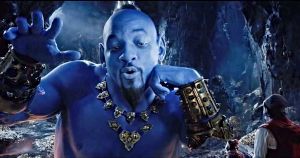 Movie
Right now Disney is on top of the movie making world, and for good reason. They have pumped out some of THE biggest box office hits in recent history, with 2019 being an absolutely epic year for them. Films like Captain Marvel, Avengers Endgame, Aladdin and The Lion King (live action) have all grossed them OODLES of cash, pushing them squarely into the limelight in terms of “past a billion dollars per film” fame. They have put out so many high earners this year alone that the next several years will just look weak and minuscule in comparison (no way they can keep this high up forever). However, their live action adaptations of animated classics have always struck me as their weak spot, and while I haven’t seen The Lion King yet, I was SERIOUSLY nervous about watching my favorite animated classic go live action with Aladdin. I passed on seeing it theatrically out of fear that my childhood would be tainted by this one, and mixed word of mouth kind of confirmed by bias. That being said, after giving it a spin on my 4K home theater system, I ended up liking the movie way better than I ever could have imagined.

It’s a tale as old as time……..errr...I mean we’ve all known the classic tale from the “Arabian Nights”. Aladdin (Mena Massoud) is a young street urchin who happens to stumble upon the princess of Agrabah (Naomi Scott) masquerading as a handmaiden in her efforts to see the city that her father, the Sultan, has locked her away from. Sparks fly a bit, but Aladdin has to make a quick exit for his petty thievery. Sneaking into the palace to return a stolen bracelet, Aladdin falls prey to the power hungry Jafar (Marwan Kenzari) who has other plans for the young boy. It seems that Jarar’s sorcery has revealed Aladdin to be the only person who can navigate the magical cave of wonders and retrieve a genie’s lamp for him. Unfortunately for Jafar, the heist of the cave goes wrong leaving Aladdin trapped inside and Jafar’s lamp outside of his reach once more.

Rub a dub dub, three rubs and poor later, Aladdin is introduced to the real reason Jafar wanted him to go into the cave. The all powerful GENIE!!! (Will Smith). Granted the typical 3 wishes that a genie gives, Aladdin uses his power to make himself into a prince so that he can woo the Princess Jasmine. A plan that seems to go as planned until everything falls apart from once simple problem. Aladdin is trying to be someone he’s not and Jafar’s lust for power soon sees through the street urchin’s facade of magic. 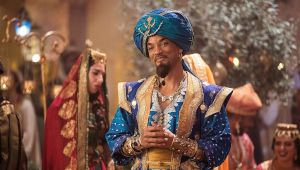 Being that Aladdin 1992 is my FAVORITE Disney animated movie of all time (yes, even above Beauty and the Beast) I was VERY skeptical of watching this new iteration. However, After a few expectation changes in my head I started really enjoying the flick. The movie stays true to the source material, but unlike Beauty and the Beast live action it doesn’t try to ape it word for word. The songs are still the same, but the actual dialog is (many times) completely different, and altered slightly to fit a more grounded approach to the characters. Jafar is not a wild and crazy malevolent villain like he was in the animated film, instead having Marwan take a more metered and calculated take on the age old villain. The same thing can be said for Will Smith. He had massive shoes to fill as Robin Williams was the single greatest feature of the animated film, and that alone made me nervous. Since most of Robin Williams lines were adlibbed (and he had contractual rights to said dialog for creative content), Will was forced to completely remake the character and dialog in his own image. Much like Jafar, Will is a more down to earth Genie, but he still has a massive presence on screen. Will has always been one of the more charismatic actors in Hollywood, and he really fills out the larger than life character, but infuses it with a more grounded and realistic approach to the pain and suffering he endures under his cosmic slavery.

Mena is unfortunately the weak spot in the film. He’s got as much dramatic range as a wet napkin, and while he’s charming and entertaining as Aladdin, he just doesn’t have the draw that one would hope for. However, Naomi Scott dominates as Jasmine. She has a charisma and beauty that is visually tantalizing, and her mannerisms and acting help mend some of the weak seams in their chemistry that Aladdin himself can’t create. Even her reason for becoming sultan felt natural and organic (I was a bit afraid it was going to pander to modern feminism with the whole “I don’t need no man!” mantra, but instead it was very believable and fit into the story so very well), instead of being forced and pandering to modern social cliches. While I would have liked a few tweaks here and there, and I REALLY missed Robin Williams, Aladdin 2019 was a highly enjoyable flick that really surprised me. Especially coming from a rabid fan of the 1992 animated classic who is jealously guarding that title as “cream of the crop” in his own mind.

Rated PG for some action/peril 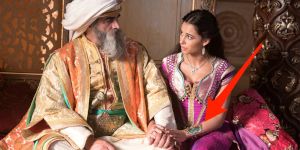 Aladdin 2019 was filmed with a mixture of 3.4 and 2.8K digital cameras and looks STUNNING on 4K UHD. I couldn’t find any information except from ONE location on whether this was upscaled from a 2K master, or using a direct 4K one, but I’m leaning towards 2K. Usually they take a 2.8k source and put it on a 2K master instead of upscaling those cameras to a 4K master, so we’ll go with that for the time being. All said and done, Aladdin looks fantastic on 4K UHD. The HDR colors just pop off the screen, whether they be the sandy colors of the Agrabah desert, or the brilliant Blue of the Genie, or the lavish shades of the palace’s entourage. Blacks are deep and inky, and clarity is top notch. It’s not a night and day textural jump over the Blu-ray, but if you look at the CGI Genie there are background textures that show refinement, as does the cave of wonders itself. All in all, a great looking disc.

I always feel a bit like I’m playing Russian roulette with Disney Atmos tracks recently. Luckily this is one of the better ones, and isn’t nearly as squashed sonically as previous ones. It does need to be bumped up 3 DB’s to get to normal volume levels, but once there the track is really airy and spacious, with lots of room for flying carpets and other magical sounds to come from. Surround usage is excellent, with the crashing of rubble in the cave of wonders, to the swooshing of the carpet flying above Agrabah. Overheads are used fairly minimally though, and if you listen to them side by side the 7.1 Mix and the Atmos track are REALLY similar in nature due to that aspect. LFE is punchy and weighty, coming in as expected during the cave and the battle with Jafar, but also having a lot of fun with slamming palace doors, or the rumble under the water as Aladdin is drowning. All in all, a rather nice Disney track and it didn’t let me down like some have.

Being a Guy Ritchie film (Sherlock Holmes, Lock Stock and Two Smoking Barrels, Snatch) I was wondering how his sort of quick editing and snarky humor would play out, but this is actually the most “traditional” film that I’ve seen Ritchie direct. Very few of his trademarks are left on the final production, and if I had not known better, I wouldn’t have even known that he was involved. The Film is fun, action packed, and actually a really entertaining ride, hailing itself as one of the best live action adaptations of classic Disney animated films to date. The audio and video are fantastic, leaving me with the happy job of giving this film a solid thumbs up whether it be the fantastic 4K UHD, or the equally fantastic 1080p Blu-ray.