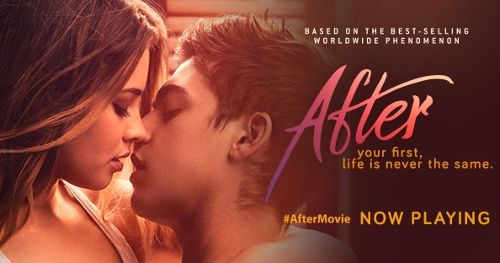 Movie
“My life before him was so simple and decided. My life after him was just…...After”.

Yes, that’s one of the opening lines of After and it sets the tone for the entire insipid, cliched, and regurgitated female fantasy that we’re about to see here. Anna Todd’s novel “After” stems from a brand new literary genre called “New Adult Fiction”, which basically is a junction point between Young Adult fiction and regular adult fiction. Really it’s just a way to raise the age level from the typical teenage young adult fiction heroes/heroines to college age, where it becomes literally romantic fantasy for women. After is sooooooooo obviously over cliched, and filled with all of the emotional fantasies that engorged Twilight, Fifty Shades of Gray (just without the BDSM sex), and Harlequin romance novel relationships so that you’re almost bursting at the seams from it all. I don’t know whether to laugh, or to cry, but most people (unless you’re 17-21, or a 40 year old lonely housewife) are NOT going to be the demographic for this cinematic twitterpeted mess.

Tessa (Josephine Langford) is going off to Rossmore University, leaving behind her over protective mother Carol (Selma Blair) and her childhood highschool boyfriend for new adventures. Straight laced, studious, and completely naive, Tessa falls head over heels for the smoldering British hottie Hardin (Hero Fiennes Tiffin, who was most notable for playing 11 year old Tom Riddle in the 6th Harry Potter film flashback). You see, Hardin is everything enticing to a woman’s fantasy. He’s hunky, got tattoos, a muscle car, and yet he’s so incredibly vulnerable and sensitive, but will only open up to YOU! *swoon! It doesn’t take more than a few well placed words before Hardin and Tessa are head over heels in love with each other, sharing intimate nights under the stars, whispering sweet nothings in each others ears, and basically mooning over each other.

To make it even better, Hardin is actually pretty messed up and angry inside, as his rich father (played by Peter Gallagher) is getting married while his poor mother is living in poverty over in England. That means there’s moments of self denigration where Hardin whispers “I don’t deserve you” and “I’m really messed up”, meaning he’s a bad boy who she can fix as well! However, there’s a deeper and more foreboding secret that seems to be lurking under the surface (as the opening monologue hints as Tessa mourns her life “after” him). A secret that keeps ramping up till the final 15 minutes and we all realize that it was just a rehash of 10 Things I Hate about You or She’s All That, just with tons and tons of angst, before they get right back onto their steamy romance. A romance that has her telling Hardin that “Noah (her boyfriend) was my best friend. But you, you’re so much more than that” after she breaks up with said boyfriend after meeting this hunky British sex symbol for all of one week.

I wasn’t sure whether to laugh or cry when I was watching After, as it pretty much takes age old romantic cliches that we’ve seen in a thousand better movies, and infuses it with the insipid googley eyed romance of Twilight and blending in a PG-13 version of Fifty Shades of Gray (seriously, Hardin just runs around shirtless half the time). My wife was sitting beside me with this horrified look on her face and exclaimed “this is basically a girl’s fantasy life after reading nothing but Harlequin Romance novels!” and I have to agree. Director Jenny Gage’s film plays out like a cheap 100 page romance novel, with all of the subtlety and flair of a sledge hammer to the back of the head.

Tessa and Hardin have a few good moments, but really the acting is pretty atrocious all the way around. Hero Fiennes Tiffin is stiff as a board the entire film, and just pouts and stares morosely at Tessa throughout. Joesphine Langford is actually pretty convincing as a girl head over heels with a new crush, and poor Selma Blair is just left snarling a few words as she tries to control ever aspect of her daughter’s life before Tessa throws a temper tantrum and goes all Anne of Green Gables dramatic on her. While I may not exactly be the target demographic for many a film that I enjoy, I have to say that After is appealing to the lonely housewife and 17-21 year age bracket of romance starved females, and pretty much everyone else will be alienated.

Rated PG-13 for sexual content and some college partying

Shot on Arri Alexa cameras (surprise surprise) and finished at 2K for the digital intermediate, the single best thing about After is this encode. It’s a very natural looking film, with bright highlights, stunningly saturated colors and exquisite detail. There’s a few indoor shots that look a bit soft and hazy, but that seems to have been done intentionally in order to give a more dreamy and romantic veneer to those shots. Facial details are fantastic, and overall clarity is incredibly sharp (sometimes a bit TOO sharp, as you can see that Hardin’s tattoo’s are actually fake upon closer inspection). Shadows are deep and inky and detail levels in the darkest scenes are still immaculate. There’s a minor problem with some black crush during the opening party that Tessa gets invited to, but after that it mostly vanishes.

The 5.1 DTS-HD MA track for After is a very solid listening experience for sure. It has plenty of college dormitory ambiance to accentuate the heavily dialog centric mix, but is also interspersed with some heavy midbass that pulsates and throbs with the pop music that is littered throughout the film. The party at the beginning is wild and active, blasting surround usage all around and literally kicking you in the chest with bass. The rest of the track tends to be a lot more laid back with college classroom hubbub as the only real activity in the back of the room outside of the score. Voices are crisp and clean, and the mix certainly does some impressive, even though it doesn’t really stretch the limitations of the format.

After is pure young adult romance fantasy gone awry, and while many a decent to good movie has used these tropes, very few of them have gone as cliched and melodramatic as Jenny Gage’s After has done. I have never read or even seen Anna Todd’s novel, so I have no idea how faithful that insipidness is to the original story, but if it’s ANYTHING like the movie, it’s very much targeting romance starved young adults and bound and determined to make alienate everyone else. The Blu-ray from Universal is quite good though, with great video, very good audio, but almost no extras whatsoever. Personally, unless you’re one of those 17-21 year olds or 40 year old lonely soccer moms, I would just skip it and save yourself the pain of watching.

Thanks for the review. Will skip it.