A Beautiful Day in the Neighborhood - 4K Blu-ray Review

A Beautiful Day in the Neighborhood 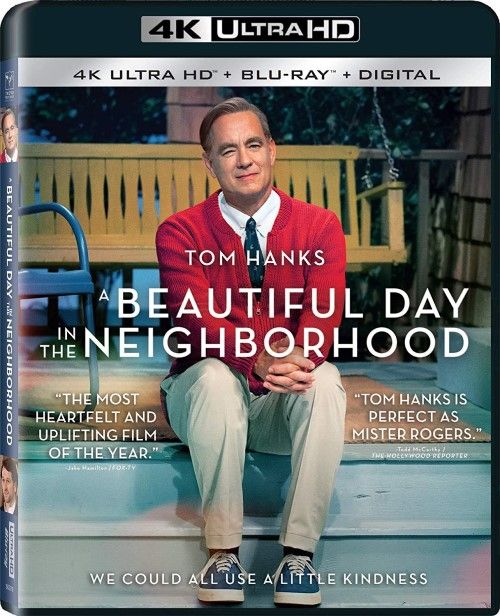 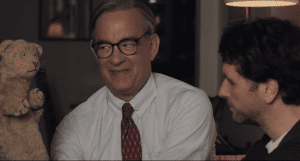 Movie
This seems to be the year (ish) for Mr. Rogers films, as we were given the fantastic biography film Won’t You Be My Neighbor back in November of 2018, and barely more than a year later we get a full biopic about the legendary children’s entertainer. Very few men can say that they have impacted as many children’s lives as Fred Rogers did, and this was due to his incredibly long running TV show on PBS. A show that went on for DECADES inspiring children to do their best, and always feel that they are TRULY special, no matter who they were or how they felt at the time. I can attest to growing up to re-runs of the classics on PBS, and to this day I can nearly recite all of the songs on the show verbatim. He taught a 6 year old kid about wrapping a piece of American cheese around a banana for a snack, and how crayons were made. As an adult I’ve watched my nieces and nephews grow up with the show and have gained an appreciation for the man’s works that I previously only was lightly familiar with as through the eyes of a child. His speech in front of congress for why they should continue funding public broadcasting was one of the most inspiring speeches I’d ever seen, and I greatly admired the man for HONESTLY giving his life to children and their formative years.

Sadly I never read the 1998 article by Journalist Tom Junold titled “Can You Say...Hero?” until this review, but it struck a chord in me when I did, as I recognized myself behind those words. Those excited words so full of hope, so full of loss, and full of happy memories about a man who always put a smile on my pre-teen face growing up. I will say this though, I was NOT really keen on Tom Hanks playing Fred Rogers in this biopic based off of that article by Tom Junold. He just didn’t seem like the type and even the trailer didn’t truly sell me on it. After watching A Beautiful Day in the Neighborhood though, I was floored. Tom didn’t COMPLETELY sink into the role to the point where all I saw was Fred Rogers (to be fair, I don’t think anyone could do so completely, as Fred was such a unique individual and such a visible face for so long that it’s hard to see anyone taking his place), but he did such an AMAZING job learning how to imitate ever inflection, every pause in his speech, and every movement and hand motion to the point where my brain started to superimpose Fred’s face over Tom’s. As I mentioned, Tom Hanks voice is so very much Tom Hanks that I still heard Tom’s voice coming out, but visually I was watching Fred Rogers. It was eerie, but also incredible to watch.

The story is kind of multifaceted and a “story within a story” in a strange sort of way. The film opens up with Fred Rogers (Hanks) coming out in his show talking about forgiveness, and the face that he focuses on in his story is that of Lloyd Vogel (Matthew Rhys), a man who is struggling with forgiveness. Flashing out of the world of make believe, we get to see Lloyd in the flesh. Lloyd is struggling a bit as a writer for Esquire magazine, having been just assigned a puff peace article about the nations “heros”, and having to interview Fred Rogers in 1998 (just 5 years before his death). Lloyd has just gotten out of a fist fight with his estranged father Jerry (Chris Cooper), and dealing with a newborn with his wife Andrea (Susan Kelechi Watson). Grumbling and whining about doing a puff piece instead of hard hitting journalism, Lloyd travels out to the set of Mr. Rogers Neighborhood to interview the man, only find out that HE is the one being interviewed.

Not completely sure after his brief conversation that Fred Rogers is the real deal and not just a slick businessman, Lloyd meets up with the famed TV star once more, only to find himself at the end of the microphone, as his entire life full of pain and agony over what his father did to him comes out. Time after time, place after place, Lloyd begins to heal just a little bit, and drawn to the man who could magically tell children they are special, AND find time for adults to be covered in the same type of love.

I was a bit hesitant not only about Hanks, but about Marielle Heller as the director. Her first feature film (this is only her third) was the indie dramedy The Diary of a Teenage Girl, and I wasn’t so sure she could handle a biopic like this. I was completely wrong though, as the film is delicately sweet, comfortably nostalgic, and completely riveting from beginning to end. I thought it was exceptionally brilliant of them to not focus on Fred Rogers himself, but rather the power of his message, and the power of his genuine love for people. The story focuses on Lloyd and Fred, but the real star of the film is how the power of his message influenced people around him, honoring him in it’s own way instead of keeping the spotlight ON Mr. Rogers.

Mrs. Rogers once remarked in an interview that too many people made him into a saint, and that Fred himself would have been frustrated about people making him into something more special than he was. He was definitely a great man in his field, but I understand where she’s coming from. Too many times we put people on a pedestal and think that we’re below them, or inferior to them in some ways. We idolize them and build them up in our minds, and Mrs. Rogers was VERY adamant that Fred would have wanted EVERYONE to feel that hey were special enough to accomplish what he did. The film does a great job of honoring the man without turning him into a legend. His message is awe inspiring, and you can tell everyone involved had a massive amount of live for the TV host as they pay homage to him and tip their hat at every turn. The film itself isn’t 100% perfect, but coming from a child who grew up on Mr. Rogers, it was such a warm and happy feeling to see it play out on screen.
.

Rated PG for some strong thematic material, a brief fight, and some mild language 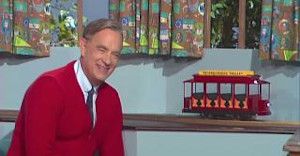 A Beautiful Day in the Neighborhood was shot very distinctly to mimic the look of late 90s television in it’s style. Cinematographer Jody Lee Lipes and Marielle Heller wanted to shoot the film on actual film stock, but were told by the powers that be that they couldn’t, resulting in the duo shooting with the “16 mm” mode of the Arri Alexa digital cameras to imitate the look they were going for. The end result is a camera mode that was barely 1080p (actually slightly less) and even with the 4K native transfer, would never truly give that pop and “wow” that people may be expecting from a 4K film. That being said, the disc is very faithful to the master used, and how it was stylized. The 1.85:1 (and sometimes 1.33:1) image is very clean, with a sort of digital noise meant to simulate film grain (which doesn’t look ENTIRELY like film if you look at it). Colors are a bit flat and bland and the black levels are intentionally milky in tone. Certain colors with the HDR do pop off the screen such as Fred’s red sweater, or the earrings that Dorothy wears, but overall it’s a rather gray and flat image. The upscale from a 1080p native camera image and the distinct style chose for the film doesn’t show a lot of upgrade over the 1080p Blu-ray. In fact, it’s very slight and mostly in the form of slightly richer primaries, a more muted tone that shows better shadow detail, and less banding. It won’t impress and shock you, but that is a side effect of how the movie was created, and not in any way a flaw from Sony. I almost gave the film a 3.5/5 for the video rating but hesitate, as there are some definite quality differences in the images, but 4 also seems a bit high so I'm just erring on the side of caution as 4/5 is more in line with 3.5/5 in my personal opinion. 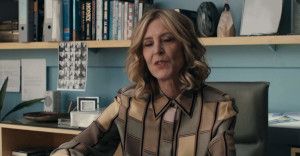 I’m kind of surprised that they went with a 7.1.4 DTS:X track instead of a standard 5.1 or 7.1 lossless mix. The film is VERY obviously a low key drama, and it seems kind of like overkill. Still, not going to complain about the additional channels as it’s better to have overkill than not enough in the audio department. The mix is soft and clean, putting emphasis on dialog and ambient noise, and I actually heard some mild improvements over the 5.1 DTS-HD MA track found on the Blu-ray, even if only ever so slightly. You can hear the rear surround channels open up in the city, or the music adding a more airy and immersive sound. Sadly (or more accurately “predictably”) the overheads really don’t have any real usage here and that’s really the only difference from the Blu-ray. It’s a good dramatic track, and while it doesn’t fill out the DTS:X capabilities like other genres of films, it is most certainly a well done audio mix.

I really did love A Beautiful Day in the Neighborhood. It’s not a perfect story, and certain aspect of Lloyds story seem contrived (though supposedly much of it was taken from a true story of Tom Junold’s experience), but it is an incredibly heartwarming and amazingly exciting experience if you grew up watching “Mr. Rogers Neighborhood”. The 4K UHD disc offers very minimal improvement over the Blu-ray due to the distinct stylistic filming choices used, but it does offer some improvements for sure. The extras are satisfying and rather impressive for this day and age, so definitely go and have a great time with the film. Highly Recommended.

(If you may wonder why I don't do my typical Blu-ray review as a supplement to the 4K UHD review, it's simply because due to the stylistic choices made, the audio and video portions are so nearly identical that it's a bit redundant).

I use to watch this with my brother when he was just a kid. This and Sesame Street. Hard to forget that routine of Mr Rogers.

Thanks for the review. I also remember watching him when I was growing up. Great memories. Too bad they don't make TV like this now..

I will get this one and I do agree, the other one is worth watching as well ---> Won’t You Be My Neighbor
J