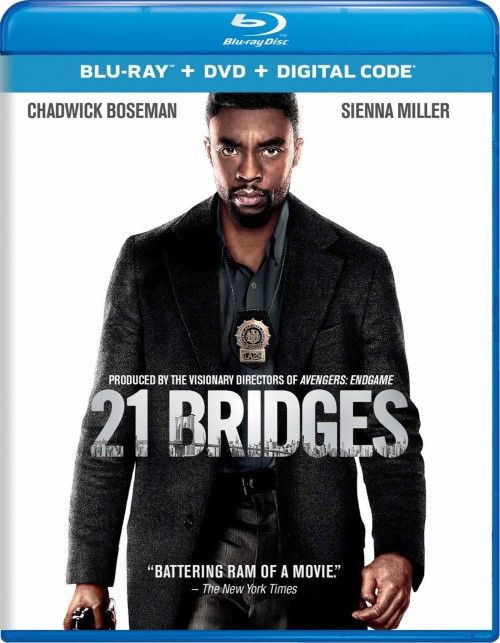 Movie
With a generic DTV looking title like 21 Bridges was a bit skeptical going into the film. Here was Chadwick Boseman, the superhero of Wakanda himself moving himself down to a generic looking cop thriller, and I started smelling the demise of so many good actors coming through the TV screen. But while there is some general cookie cutter aspects to the action packed thriller, and some low level choreography for the fights, 21 Bridges is actually a rather competent thriller. It doesn’t go above and beyond the call of duty, but Boseman carries the film quite well, even with the rather silly ending. I’m not going to say that it’s a great film, but certainly much more entertaining than I expected it to be with the rush of DTV action flicks coming out these days, and how similarly it looks to said movies.

Andre Davis (Chadwick Boseman) is a second generation cop, having been through his own police officer father’s death as a 13 year old boy. Now that he’s all grown up, the tough as nails detective is out to make the world a better place by taking down the scum who would do things like what happened to his own father. When a local drug dealer in Manhattan is hit for over 50 kilos of cocaine, a squad of responding officers are gunned down by the trigger pullers doing the job (played by Stephan James and Taylor Kitsch). NYPD Captain McKenna (J.K. Simmons) is livid with rage, and brings in detective Davis to take down the two perps before the feds come in and take over, mandating that the ones who did this pay with their lives, at all costs.

Along for the ride is NYPD detective Frankie Burns (Sienna Miller), who has been appointed by Captain McKenna to watch his back. As the two start following the duo to their hideout, things start to look a bit murky to Andre. Certain things don’t add up, and the more he hunts his prey, the more questions he actually has, until the entire thing starts to unravel from the seams and opens the door for an even more insidious hand at work here.

I’m not going to spoil anything, but the biggest flaw I have with 21 Bridges is that it’s extremely predictable. The bad guys are the guys you think they are (kind of), and the secret twist that it very obviously coming has been done a million time in other “Policeiers” over the years. The ending itself wraps up in a big blood bath that ends a bit too abruptly and a bit too neatly tied up for any inquisitive viewer. That being SAID, the movie itself is actually quite a bit of fun. Boseman shoulder’s the brunt of the film’s dramatic acting, creating a character that is both quick behind the trigger, but also meticulous and a thinker as well. The deductions don’t take huge leaps to get to where he has to be, but the film shows him as competent, jumping from clue to clue in a natural manner, which gives him a more authentic flair rather than have him just pull them out of thin air.

Sienna Miller surprisingly is very low key here as Frankie. She has a few scenes to emote with, but mostly she’s a background character. The same goes for J.K. Simmons. The only other character who stands out is Stephan James, playing as one of the killers. His and Boseman’s chemistry works well when they meet in the meat locker, and the ending of his portion of the film is one of the better done scenes. The movie itself is a bit rough around the edges and pretty generic with the plot leaps, but overall it’s a satisfying police thriller.

Rated R for violence and language throughout

Shot using Arri Alexa cameras and finished at 2K for the digital intermediate, 21 Bridges looks quite good on Blu-ray. The glossy digital film takes place mostly over the course of one night in Manhattan, so the film is usually bathed in darkness for a majority of the run time. The dark film isn’t overly noisy, and actually is pretty stinking clear except for some intermittent mosquito noise and some lightly washed out black levels. Otherwise details are exceptional, allowing us to see clothing nuances as well as the individual beard hairs on Andre’s face. There’s splashes of color in the daytime shots, usually at the few shots at the beginning of the movie, as well as the film’s finale, but they pope with color in Captain McKenna’s house, and the overall clarity is exemplary.

The single 5.1 DTS-HD MA track is well done as well, with a good sound stage that is way more open than I was expecting for such a claustrophobic setting. The surrounds are wildly active with police sirens and city traffic in the background. Vocals are crisp and clean as a whistle, and the LFE is nice and punch during the action scenes (which are quite frequent). I couldn’t detect any abnormalities in the sound mix, and while I could have used a LITTLE more bass, the LFE is still very precise and powerful when utilized.

21 Bridges isn’t exactly a film that tries to trip you up with lots of twists and turns, but is much more focused no the interactions between Stephan James and Chadwick Boseman as they play their game of cat and mouse. Andre is a very careful and meticulous in his findings, and the moral quandaries as he finds new twists and turns throughout the film are what keeps the viewers invested. It’s not going to be another Black Panther in terms of popularity, but the movie is solid enough and entertaining to yours truly. A simple cop thriller with just enough ingenuity to keep you interested, and enough well beaten trails to be familiar and comfortable to most. The Blu-ray is well done as well, with good video and audio, but only a modicum of extras. Worth a watch