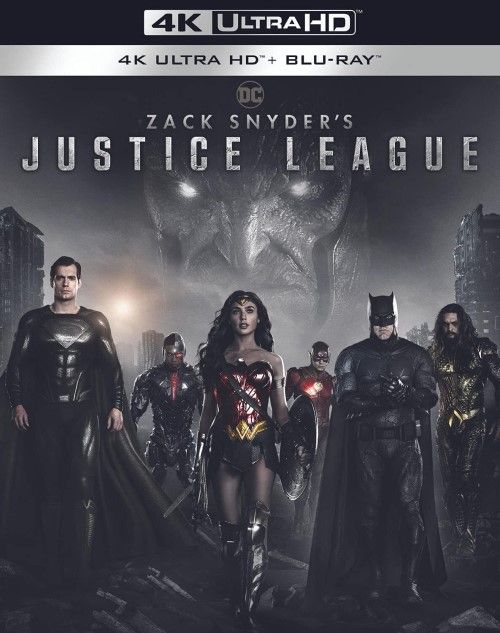 Movie
It’s no secret that Warner’s use of the DC films have been less than AMAZING when compared to the methodical and thought out plan that Marvel has used for over a decade. However, Zack Snyder has done a good job helming most of the DC live action movies and created a uniquely dark world, and while some of his films have been controversial (such as his take on Superman) nothing was so controversial as what happened to 2017’s Justice League. Due to the untimely death of his daughter Autumn, Zack was forced to take a mental break from the production of Justice League, leaving Warner with the choice of bringing in a new director and finishing up, or scrapping the product. So they hired Joss Whedon to come in and do reshoots and re-edit the film from scratch, resulting in a film that felt tonally out of place, and was widely criticized as a “fun mess” by most people 4 years ago. Well, fans have been CLAMORING for the rumored “Zack Snyder cut” of the film and have been petitioning, begging, and generally pestering Warner to get off their butts and let Zack re-do the film to his liking. I guess fans were loud enough as Warner greenlit Zack to do just that about a year ago, giving him am $70 million budget to go in and re-do, recut, and shoot brand new scenes to make the film what he would consider HIS vision.

Zack Snyder’s Justice League has the elements of what made up the 2017 film, but it is MASSIVELY different in execution and has a ton of different scenes in the movie. One of the most obvious problems with the 2017 Justice League was how Victor/Cyborg was just shoe horned in there with no back story. We were just supposed to accept he was who he was and go from there. Ezra Miller’s Flash was almost as bad, but he was such a charismatic character that we really didn’t need a whole lot to go on and it just worked. Zack has completely recut the film and used a TON of leftover footage that Whedon threw away making Victor a fully fleshed out character with a solid back story and character arc with his father Silas. The movie itself clocks in at just over 4 hours long with credits, and spread out over 2 Blu-ray discs with 2 hours and 2 minutes on the first disc, and an hour and 40 on the second. Each film is given the usual chapters, but Zack goes a step further and separates the movie into 7 distinct “chapters” so we can pick and choose what sections of the movie to watch based upon thematic elements happening.

Honestly, if you’re going to look at it objectively, it’s a bit of a “2 steps forward, 1 step back” situation. Justice League 2017 wasn’t a great movie, but it was fun. The new Zack Snyder cut is a HUGE step forward for storytelling though. It doesn’t just tease us with Darkseid, it fully sets up his apocalyptic return and makes the whole coming of Steppenwolf much clearer. The same can be said for Bruce’s dream that sets up the whole chain of events that we see in the Injustice games, and the turn of Superman that was a massive storyline back in the day. It’s amazing how well Zack maps out the future for the DC live action movies and what could come in the future. Even the end credits scene with Deathstroke and Joker was so well done that it gave me chills.

HOWEVER, there is that one step back that I mentioned, and that comes in the form of Zack’s hubris and self indulgence. The movie clocks in at a ridiculous 4 hours of length with a lot of the backstory elements feeling bloated and over extended. Instead of a movie that feels like there was not enough information for a 2+ hour film ala the 2017 movie, we have a film that feels like “too much information in too much time”. Plus there was an excessive use of slow motion added to the whole experience that drug it out further. For example the slow motion shots of Aquaman walking into the ocean with people spending 5 minutes to sing a song as he fell below the waves. It just reeked of Snyder knowing he had carte blanche to do whatever he wanted and he just over indulged in a little bit of hubris and self gratification.


Rated R for violence and some language

As with the Blu-ray release, the Aspect ratio of 1.33:1 vs. scope was a big change, but being that it’s a stylistic choice specifically chosen by Zack Snyder, it’s just something to get used to. After about 30 minutes into the film I stopped noticing it completely and just went with it.

But like usual, we’re really here to see about the uptick in visual quality over the 1080p counterpart. Luckily this 4K UHD release is just as big an upgrade over the Blu-ray as the theatrical cut was. It’s a stunning transfer with razor sharp detail, amazing color depth and a highly stylized look that makes it appear much different than the theatrical. Gone are the bright sunny highlights with super saturated colors. Instead we have a much more grim and blue/gray tone that Snyder really goes for. Colors are more chromatic in nature, with duller highlights, but still showcasing amazing colors under the surface. Compared to the 4K UHD the Blu-ray actually looks over brightened. The colors really do feel richer and more vibrant in this muted look. The dimming that is natural with HDR makes it look less garish and over saturated, and colors like The Flash’s suite show a much more natural maroon red, or the blue and gold on Wonder Woman’s outfit. Honestly the quality of this 4K UHD disc is staggering at times, showing a much better look than the Blu-ray, which was already a great looking Blu-ray disc. Nerd moment here. We FINALLY get to see the black Superman suit that we were hoping for!

Like usual, Warner has put the Dolby Atmos track on both the Blu-ray and the 4K UHD disc so it doesn’t matter which discs you choose, this is going to be the same killer mix. And the Dolby Atmos track is basically identical to the 2017 version in terms of scope and depth. Nothing feels massively remixed. It’s a bold, brash, in your fact super hero track that sizzles with the Flash’s lightning, smashes you in the chest with LFE, and literally encompasses the sound field with ambient effects. Overheads are used to amazing effect in the final battle with Steppenwolf, and the underwater effects when Aquaman visits his home is incredible. You can literally hear the water swirling above you and behind and around you at once. Simply put, Warner didn’t pull any punches with this mix and fans WILL be happy.

• The Road to Justice League

At the end of the day, this new cut reminds me of the extended cut of Batman Vs. Superman. It won’t make you love the film if you hated the theatrical cut, but it was definitely a much better cut. It felt more at home in the rest of the Snyderverse (which is sadly no more as Warner has just cut it off at the knees in order to go elsewhere), and does a MUCH better job with both heroes and villains. Sure, it’s not going to make haters of the 2017 film magically love the movie, but fans o the film and the snyderverse will be VERY satisfied with what we got, even if what we got IS a tad bloated. The 4K disc looks and sounds amazing, but the extras found on the regular Blu-ray are all missing and we have only one 30 minute featurette, so I would suggest keeping your 2017 editions for that. Fun Watch.