Weathering With You: Collector's Edition 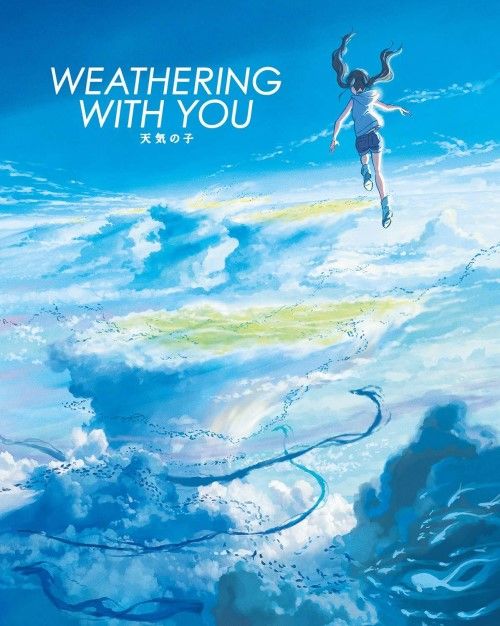 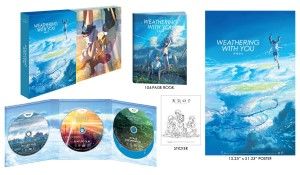 Movie
Weee!! sorry, not sorry, I’ve been excited for the 4K UHD release of Weathering with You since the Blu-ray came out 2 months ago (almost to the day actually). The Blu-ray was absolutely stunning, and with all the extras and special addon to this massive set I was super stoked being that Weathering With You was my favorite animated film of 2020 (well, that was RELEASED in 2020) and as a 4K fan, I wanted that upgraded picture. As you can tell, the analysis of the film will be the same so I will link to my review of the Blu-ray for those wanting my full thoughts on the movie itself, but we’ll spend the rest of the portion going over all the do-dads and add ins that Shout Factory gave us.

Weathering With You Blu-ray Review 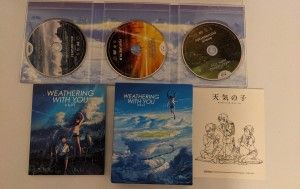 1st off the bat we have to notice that the film is housed in a really nice chip board box with Hina on the front along with the massive storm world. Open it up and we find 3 different “pull outs”. The main one being a fold out digibook that houses the 4K UHD disc, the Blu-ray disc, and a 3rd tray that has the CD soundtrack as well as the Documentary disc (I almost thought they left out the CD, but it’s under the Documentary disc in the 3rd foldout page). Next is a 104 page booklet filled with hundreds of art photos from the movie as well as info about characters, some backstory bits, as well as hand drawn little bits and pieces from the film. 3rd will be a fold out theatrical poster for the film (same picture as the front cover art) and lastly a little sheet of character stickers for the film. All in all a rather impressive set of physical swag as well as 4 full discs for the movie and special features. 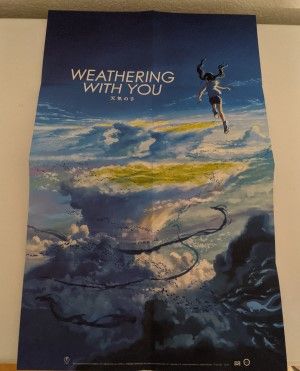 Now for one of the biggest portions of the review, the upgrade for Blu-ray to 4K UHD. Now, the Blu-ray from Shout Factory is a GORGEOUS looking image, and I gave it a 5/5 rating so I wasn’t sure how big of an uptick we were going to get. Luckily Shout Factory’s 4K encode is just as great as the Blu-ray and there is a noticeable difference in quality. The animation is already incredible in 1080 and the upgrade to 4K doesn’t give a MASSIVE boost in visual details. However, you can still see some background items more clearly (such as the skyscrapers in the misty rain), and the blades of grass in the park look noticeably crisper. The really big difference comes in the HDR and DV color spectrum enhancement. Both are really impressive, with DV getting the nod for being slightly better on the blacks. The colors are just richer, more vibrant, and with so many incredible colors in the film (one thing I raved about in the Blu-ray review), better colors really just make the film. It really feels like it can just pop off the screen and you can reach out and touch the landscape. Black levels are handled better, and the dimly lit rainy portions really show much better shadow details and the daylight scenes don’t look AS blown out in comparison (one thing I’ve noticed with a well done 4K disc, the Blu-ray looks sort of blown out in comparison as the HDR/DV tames the brights a bit). This is a fantastic release and outside of some of the standard level artwork not really showing much textural advantages, this is an amazing 4K UHD disc. 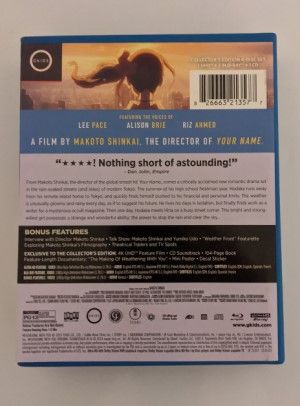 This is the exact same 5.1 DTS-HD MA track that's found on the Blu-ray, so my analysis of the audio will be exactly as high praise marks as I extoled upon the Blu-ray release a few months back. Like usual, Shout Factory has provided us with dual language 5.1 DTS-HD MA tracks (English and the original Japanese dub). Both are functionally identical in all aspects except for the spoken language, so choose whichever one suits your fancy (I personally stick with the Japanese track, as the English track’s dubbing is just “OK” more than anything). The film is the second film by Mokota to feature the entire score done by the Japanese rock band “The Radwimps”, and it fills the sound stage perfectly. The surrounds are wildly active with the sounds of falling rain (rain is a predominant theme throughout) as well as the uplifting pop rock score, and the LFE channel is always active, even if it’s usually not massively noticeable. There are a few bits near the end (think gunshot, or lightning crack) where it jumps out and kicks you in the teeth, but the low frequency channel is much more of a supporting character than a main attraction in how it’s mixed. Dialog is always crystal clear, and evenly balanced with the rest of the track. At the end of the day, this is auditory perfection.

This collector’s edition really is the bees knees (yes I said bee’s knees), and Shout Factory spared no expense with making this edition on par with collector’s editions by Funimation or Bandai or any other major name Anime player out there. We get the 4K UHD version of the flick that we wanted, a special bonus documentary disc with a REALLY in depth doc, and a CD sound track all in a fold out digipack. Add on the amazing 104 page artbook, the poster, AND the line art cards and this is a true centerpiece of anime fans. Most of the time I grumble and whine about “box-o-swag” editions of films, but for this one I will make an exception. The art and the fold out poster are really neat, and I got really engrossed in the 104 page booklet. It’s got AMAZING art stills and some really nifty info in between those pages. It may be pricey, but this is the only way to get the 4K UHD disc AND it includes plenty of new extras for those of us who have been disappointed with how lean extras are on modern films. Must buy for sure, and IMO worth the upgrade over the Blu-ray.

Thanks for the review. I have heard lot of good things about this movie and will check it out.

One of the many things I appreciate about you, Mike, is your love of this genre. It's not in my wheelhouse, but it's great that it's in yours. Your knowledge dump is impressive!

Todd Anderson said:
One of the many things I appreciate about you, Mike, is your love of this genre. It's not in my wheelhouse, but it's great that it's in yours. Your knowledge dump is impressive!
Click to expand...

haha, my wife and I both love animation and anime in particular, so you would be FRIGHTENED of my anime wall (I have to have a whole wall dedicated to it, not a shelf)... last time I checked it's over 2,000 series and movies)

I have a few