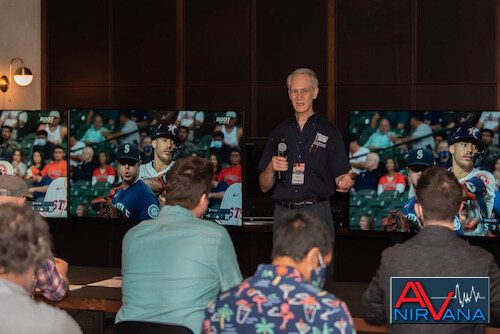 (June 13, 2022) Value Electronics has released details concerning its 2022 TV Shootout Evaluation. Set to be emceed by Caleb Denison (Digital Trends), the two-day event is tentatively slated to feature five different 4K TVs on day one, followed by three 8K TVs on day two. A panel of professional judges will ultimately decide this year's "King of 4K TV" and "King of 8K TV."

Much like last year, the Shootout is being held in partnership with Dealerscope, a leading business-to-business publication that focuses on consumer technology retail, with testing rigs and cables supplied by AVProStore. According to Robert Zohn, owner of Value Electronics, the event will begin at 9AM on Saturday, July 30, and will resume at 10AM on Sunday, July 31. Both days will be held at The Company Building, 335 Madison Avenue, New York City.

“This is a must-see event for all who are interested in the best video displays," explains Zohn. "We are excited to have two separate categories, 4K and 8K TVs, so the public can see how each display compares in these competitive classes. At the conclusion of the second day, we will put the winners of the 4K and 8K TV Shootout next to each other to demonstrate the visual perception of the differences we can all see between these two top-of-class 2022 TVs."

4K TV Shootout
8K TV Shootout
Zohn says that more TVs *might* be considered; final details will be released once they become available.

Due to COVID, the Shootout will not have in-person attendees. However, select media will be present, along with a panel of professional Hollywood video colorists, film finishers, TV reviewers, and video scientists. AV NIRVANA will be on-site to report all of the happenings.

Todd, thank you for covering our 2022 TV Shootout Evaluation event again for this year!

So very happy you will be attending in person and posting your findings on this thread!!

Robert - what, in your eyes, is the biggest advancement in the 2022 crop of TVs?

Will the shootout incorporate upscaling HD broadcasts into the equation?

Yes we send each TV FHD/SDR images and test patterns to test and compare the scaling performance.
4

It would be interesting, if there would be a comparison round with "uncalibrated" picture modes. Chause that's what 90% of the customers will perceive, because they won't hire a professional calibrator. Reset the tv sets at the end of the event and let the jury once again evaluate. Just one quick round of Movie/Filmmaker/ISF-Mode and Game-Mode. This could be the base of a "out of the box" award, for the best presets. Also a signal to the tv manufacturers, to ship their products with proper presets and don't cheat (looking at Samsung)

We do test, and evaluate the TVs as they come out of the box and the judges vote.
4

Ok, my fault. I thought, the tvs will only be presented after calibration.

Are you going to stream the event this year?

Is the Z9K worthy of taking the place of my Z9D?

I wish I could be there

Hi Jim, Yes Sony's new 2022 Z9K is a very worthy successor to the formable Z9D. The Z9K has deeper blacks and is also brighter. The new 2nd generation XR processor is also a nice enhancement vs. the X1 processor the Z9D employed.

Robert Zohn said:
Hi Jim, Yes Sony's new 2022 Z9K is a very worthy successor to the formable Z9D. The Z9K has deeper blacks and is also brighter. The new 2nd generation XR processor is also a nice enhancement vs. the X1 processor the Z9D employed.

I'll have to take a serious look at the Z9K

I once mention to you that going to your Shootout was on my bucket list but as old age creeps in, my wife has dementia problems and I can no longer leave her for the 3 days it would take to fly in and attend.

My heart will be with you.

I love my LG B6 OLED. It often really shines with regular old cable TV. There are times, however, when sports (particularly baseball) could use a nudge in the upconversion department. I'm so longing for 4K sports... or an experience where a TV can take the compressed HD cable signal and give it a magical boost. I need to see my Orioles in perfect detail!!! :-)
Last edited: Wednesday at 4:16 PM
You must log in or register to reply here.
Share:
Facebook Twitter Reddit Pinterest Tumblr WhatsApp Email Link