A collection of bug fixes in beta 4, along with a few new features.

The tone burst generator now has a window option with a range of window types. The window is applied across the length of the burst, here is a 7-cycle Blackman-windowed burst as an example:

Another generator change is the addition of 32-bit float as a format for exported WAV files, that option is also available when exporting impulse responses.

Memory use and file size has been reduced for sweep measurements.

There is now a View preference to show some user-defined watermark text on all graphs and graph captures, apart from waterfalls and spectrograms. Handy for adding your website as a background, for example.

The additional text for graph captures is now placed above the graph and can also be styled using HTML 4.01 tags for those who'd like a fancier looking comment 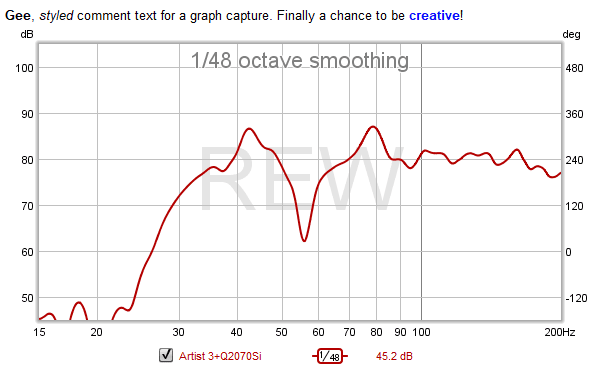 The level check test signal has been causing some issues, due to a bug (see below) but also the switch to periodic noise instead of random noise. In this version a soundcard preference has been added to choose whether to use random or periodic pink noise for level checks, with random being the default. Periodic noise will give much more stable readings for subwoofer levels.

The bug fixes then, firstly some affecting the generator, self-explanatory:
There is a change to the sweep level control so that it updates its setting if the "Full scale sine is 0 dBFS" preference is changed, it is now consistent with the generator level control.

An exception could occur when using the EQ window with a measurement that did not have an impulse response, such as the result of averaging measurements.

If a graph capture included the graph title it was rendered in a fixed, large font that might not fit within the captured image. The font size is now adjusted to make sure it fits.

Finally, the installer JRE download links were incorrect, which would cause a corrupted bundle error message when trying to download a JRE on a system which didn't have one.