V5.20 beta 14 has more substantial changes that I'd originally planned, largely as a result of the effect clock rate mismatches between input and output device can have on the impulse response appearance and phase response.

When using an acoustic timing reference an additional timing reference signal is played at at the end of the sweep and the time between the timing reference signals is used to calculate any clock adjustment required to match the input and output device clock rates. If this option is to be used with file playback remember to generate a new sweep WAV file with the Analysis option selected, that will append the required extra timing signal.

When using a loopback connection as a timing reference the loopback signal is analysed to calculate any clock adjustment required to match the input and output device clock rates. To determine this adjustment the sweep must start below 1 kHz and end above 10 kHz. It may not be possible to calculate the adjustment if the input doesn't have good low frequency extension. In that case the acoustic reference can be used instead if there are clock differences to correct

In both cases any clock adjustment applied is shown on the measurement Info panel and on the Impulse graph controls: 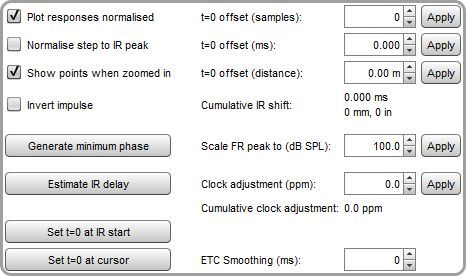 The impulse graph controls also allow clock adjustments to be applied manually to an impulse response, provided the response has been measured with V5.20 beta 2 or later.

Soundcard calibration measurements include a check for input/output clock rate mismatch and will apply an adjustment if required.

There are a few small changes:

There are also some bug fixes:

In Preferences, with "Drop filters if gain is small" selected, during "Optimise gains, Qs and frequencies", Manual filters are being reset in some situations. The Manual filters are used to match the High Pass or Low Pass of the target curve.

Thanks, I've fixed that for the next build.

I have trouble with multiple sweep measurements:

See the attached file. View the impulse response panel of each measurement zoomed out in time with 'window' selected.
I quickly tested with 'delay start' on and off and with 'loopback timing' on and off and still had similar issues. The 0, 0, 500 change in window limit setting seems to be random with some multi-sweep measurements.

The mdat seemed to upload okay, but did not attach. It may be too large? Let me know if you need it to check this issue out.

I don't need the mdat, I've found the issue. Unintended side effect of the timing correction work, I've fixed it for the next build. In the meantime multiple sweeps won't work properly, sorry about that.

I have uploaded beta 15 to fix the multiple sweeps problem.

Thanks!
I have also noticed occasional glitches in the SPL and distortion traces. I founded a sure way to create these. Mouse click on any other window while the sweep is in process. This can be the main REW window, any other program window, or the desktop. Anything except the measurement window. This always disrupts the sweep causing a SPL and distortion glitch. While I now know to just avoid doing this I sometimes get similar glitches anyway. These random glitches are smaller than the ones shown below using mouse clicks.
I suspect that may be a hardware or PC setup issue. I am curious if others have seen this same problem. If it isn't common then I know to continue to try and find the cause of this.

The measurement dialog is modal, so it doesn't allow focus to be transferred to other REW windows. On a windows system that will usually cause an error tone to be played through the default System audio output - if that is the output you are using for measurement it will interfere, best not using the System output for measurement if possible.

Thanks, that was the problem for the mouse click issue.
I am using a FocusRite, 2i2G2 and their ASIO driver. I finally found that my windows sound scheme set to 'default'. When it is reset to 'no sound' the mouse click problem cleared up. I think this issue may have started with a recent update to Windows 10 v1903. I am pretty sure I had previously been set 'no sound' on v1809? (whatever the previous Win10 version number was).

FYI:
I just tested to see if this also cleared up the occasional smaller glitches seen without a mouse click. It does not. This has been a longer term issue. I still assume it is an equipment/setup issue and do not expect any effort on your part to investigate this.
I have increased the buffer to max, disabled WiFi and run on the battery, but that does not help.
If you have any thoughts as to what else I should look at please advise.
This is mostly just to advise you in case others indicate similar problems.
Attached is a portion of an mdat that originally had 5 sequential measurements. The first 3 were normal and identical so I deleted measurement 2 and 3 to reduce file size . The last 2 (measurement 4 and 5) have the small glitches that I often get. In this case 2 of 5 measurements had the issue, but the frequency is variable related to some unknown event. I am pretty sure my older 2i2 interface also did this so that suggest is PC hardware or OS settings.
Thanks!

Known issue (since beta 13): The generator level adjustments do not work when the View preference "Full scale sine rms is 0 dBFS" is not selected. Fixed for the next build, workaround is to select the preference.
You must log in or register to reply here.
Share:
Facebook Twitter Reddit Pinterest Tumblr WhatsApp Email Link