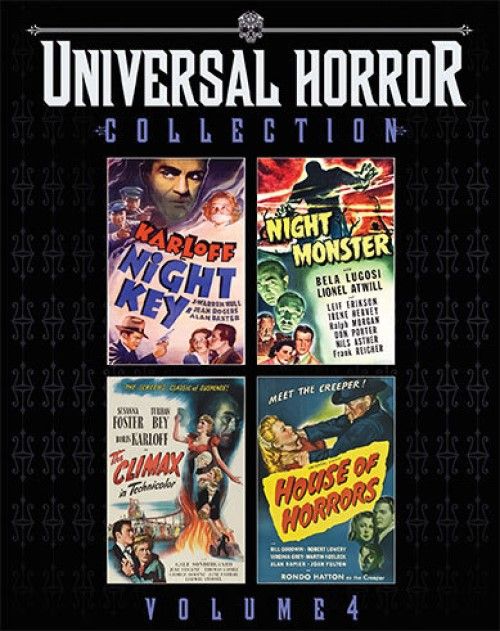 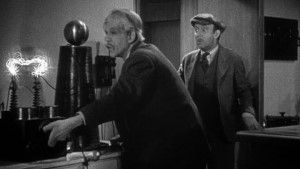 Movie
What started out as a simple Bela Lugosi and Boris Karloff collection turned into an entire series of Universal horror/sci-fi/thriller films that span not only the acting careers of the before mentioned dynamic horror duo, but many others as well. This 4th set brings us some strange oddities that don’t always fit in the horror genre from Universal Studios, digging deep into 1937 for Night Key, as well as Night Monster, The Climax and House of Horrors for fans eager to get more of the old genre classics that don’t fall under Universal Studios releases to us so far (which usually consist of the major monster movies from back then that we’ve all known and loved). These sets let us dig deep and discover other films of those 30s and 40s that were not nearly as popular, but still are a great blessing for those of us craving more than just the standard fare.

Night Key is the first film out of the gate, and easily the least “horror” of the genre. In reality, it’s a gangster movie with some science fiction elements, but there are definitely no real scares here. I’ve noticed in these later sets that more and more of the films are more “thrillers” (of the day) than they are scary fright flicks, and Night Key is the main one of this set that falls under that “thriller” moniker.

The inventor of a burglar alarm (Boris Karloff) attempts to get back at the man who stole all of the profits for his invention before he goes blind, only for his device to end up in the hands of gangsters. Who then use the inventors device to actually get away with burglaries, leveraging the aging inventor with his knowledge.

The film is silly, a bit trite, but totally fun for the 1930s. It’s a fun little gangster movie that is extremely light on scares, but has a few nifty tricks up it’s sleeve. Karloff is great as the inventor, and while he isn’t the MAIN star of the show, he certainly steals every scene that he’s in for sure. His blindness comes across as completely genuine and heartbreaking, so much so that you feel so sorry for the poor guy and really get ticked off at those taking advantage of him so much. He’s such a desperate and plaintive character that I was honestly thinking that the actor WAS blind at one point. He does it so well and seamlessly that you can’t take your eyes off of him.

Night Monster leans a bit more towards the “horror” side of the aisle, but in reality is much more of a murder mystery ala Clue more than a true horror film. The plot revolves around a rich recluse named Kurt Ingston (Ralph Morgan) who invites the doctors who left him a crippled invalid to his swamp surrounded mansion. Everything seems alright at first, as Kurt seems to want to entertain his guests, especially since he has invited a mystic name Agar (Nils Asther) to entertain them. However, things start to get grim when the doctors start dropping one by one, bringing in the Clue elements to the story as they all try and figure out what’s going on before they’re all killed.

Night Monster is actually rather convoluted and dense story wise. There’s a lot going on with sub characters and various sub plots, but it all comes back to Kurt and his desire to make the doctors who left him an invalid pay for their negligence. The only problem is that it’s not that urgent of a narrative, and while the murders can be shocking and twisted, they don’t really push the story along very far. As such it feels a bit plodding and in need of a kick in the pants. 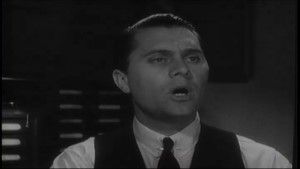 A doctor employed by the Vienna Royal Theater named Hohner (Boris Karloff) has a terrible secret. In a fit of rage he once murdered his fiancee in a fit of rage, and has hidden the secret deep within his psyche ever since. Over ten years later a new singer comes to the Vienna Royal Theater, and is set to take the world by storm with her lovely voice and beauty. However she has one little quirk. She sounds just like Dr. Hohner’s dead fiancee, which brings forth a whole host of obsessive traits from the doctor and a murderous rage that the good doctor thought he buried years ago.

The Climax is a result of Phantom of the Opera, as Universal Studios wanted to go back to the lavish sets of the day, but didn’t want to create something TOTALLY new. So instead they utilized most of the sets and costume pieces for this film, and molded it around the Vienna Royal Theater instead. It’s a fun movie and probably the most “horror” of the series by far. It’s creepy, rather introspective, and Karloff does a great job as the creepy Doctor Hohner, displaying kindness and sympathy, yet also a deeply submerged hatred and evil underneath the surface as well. Sadly the rest of the movie is a little lacking, not quiet living up to the depth of Phantom of the Opera, despite re-using much of the lavish visuals that made it such a stunning film. The finale is quite the stunner (for the time at least), and Karloff steals the scenes he’s in (like he always does), but the heart of the film is a little stale for me.

A poor sculptor by the name of Marcel (Martin Kosleck) is getting ready to end his life due to the constant harassment of the upper crust critics when he a man known as “The Creeper” (Rondo Hatton) drowning in the lake where he’s about to meet his own demise. Rescuing the deformed man from death, Marcel plans on using him for a muse to create more works of art. However, when it’s discovered that The Creeper has a penchant for violence Marcel comes up with a brilliant new idea. Why not unleash the Creeper on all of the upper crust art critics and artists around town who have harassed and haranged his work for so long!?

House of Horrors is a plot that artists/writers/creators everywhere would definitely feel partially akin to. Who wouldn’t want to wish some sort of penance upon those who have criticized and marginalized their life’s work? Most artists have had the all powerful critic malign their efforts to much chagrin, and there is a sort of macabre humor attached to the production. Watching the hulking form of the Creeper wack victim after victim is strangely satisfying, and the simplistic nature of the horror film is well played out on screen. However the horror aspect of the film is rather weak, instead opting for a murder mystery instead that sort of languidly goes forward instead of keeping the audience truly engaged.


Not Rated by the MPAA 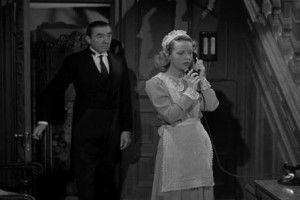 Night Key was advertised as having a new 2K master struck from a fine grain element, and it looks rather nice for a 1937 film. The 1.37:1 transfer captures the elements of the movie quite nicely, with good details along clothing and faces, and keeping film grain from getting too out of hand. There’s a few flecks and specs along the way and a soft scene or so, but otherwise this is a great looking transfer by Scream Factory.

Also given a new 2K scan stuck from a fine grain element, Night Monster looks equally as good as Night Key does. The black and white photography is clean and clear of most problematic elements, with good shadow detail and fine detailing all around. The house is nuanced with little intricate details, but sometimes the outdoor shots look a bit murky and soft. Film grain is definitely present, but it looks natural and very pleasing to the eye. All in all, another very good transfer for a niche film.

The Climax breaks out of the black and white mold, opting for a bright and colorful technical transfer for a more “modern” look. The overall draw of the image is most definitely the garishly colored pinks and blues of the picture, but skin tones and facial features look well balanced. There’s some heavy grain for the image and some obviously soft areas, but overall it’s a nice looking 4:3 transfer.

House of Horrors seems to be the only film in the bunch that wasn’t struck from a new scan, or given a new master, and that does show a bit. The black and white film is a bit soft, has a few flecks here and there on the screen, and is moderately detailed. The film is quite nice to look at and grain is a bit heavy and awkward looking. Set pieces are well detailed though, and faces definitely look solid. It’s very solid looking transfer for a 1946 film, but it just doesn’t live up to the new scans of the other three films. 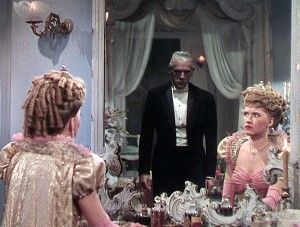 The 1.0 DTS-HD MA mono track is quite simple, but very effective and well done as well. The dialog is above reproach and while there is some mild pops and crackles along the way, the very simple track is clean and very clear. Scoring isn’t very apparent, but the ambiance of the mood is delivered well and mirrored nicely in the two mains.

Night Monster is a bit more dated in the audio department, and suffers from a few flaws throughout the film. There’s some minor pops and hisses and crackling moments, but I also noticed several audio dropouts and the dialog is a bit hollow sounding. The entire mix just feels “odd” if you know what I mean. Scoring is well done and dialog is always intelligible, it just shows signs of age and creakiness more than the others.

The 1.0 track for The Climax is a bit more punchy and exciting as the musical nature of the plot line requires quite a bit of singing. Musical instruments come through cleanly and precisely, while songs showcase great vocals. Naturally with a 1.0 track you’re not going to get some sweeping cinematic sound stage, but for a 1.0 track the musical nature of the film comes through with a precise and well defined sound stage.

House of Horrors fares moderately well, and like the rest, suffers from some pops and hisses that make it’s way into the film. Dialog is rendered clearly and cleanly, and the scoring is more than ample for the simplistic sound design. The Creeper’s growls and grunts are one of the highlights of the mix, and overall it’s a very satisfying experience considering the 1.0 nature of the mix. 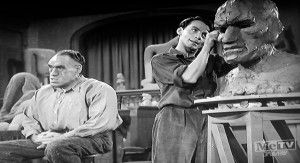 Universal Horror Collection: Volume 4 is another little treat into the long forgotten creepfests of the 1930s and 40s, with a variety of sub genres in that overarching “horror” genre dotting the landscape. I’ve really come to be well pleased by the 4 set collections that Scream Factory is putting out, as they are moderately priced and given some great extras this time around as well. Easily worth the money in my opinion.