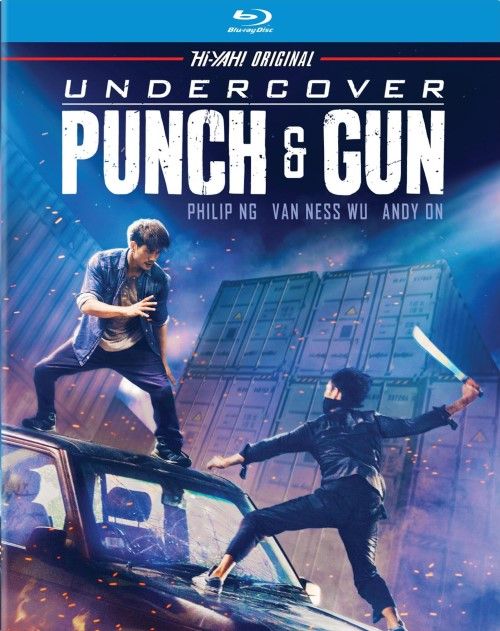 Movie
Self deprecating humor in action movies has been a thing for years. In fact, I’d say outside of the horror genre, it’s the one genre that really doesn’t take itself TOO seriously most of the time. The crazy hijinks and stupid tropes are so well worn that it’s almost a facet of love to notice how bad they really are in real life. The first few minutes of Undercover Punch & Gun winks straight at the camera with the first fight scene. A guy ducks behind a car door in a gunfight only for his buddy to yell

only for Fireboy to yell “It works in the movies!” before getting blown away. This pretty much sets up the tone of the movie for the rest of the 90 minute runtime, as the film is a very self aware and jokey action flick. Wu (Phillip Ng) is an undercover cop working for a crime lord, only for said crime lord to drop dead due to a serious overdose of lead at the hands of a rival gang. Wu is put in charge of the operation on the boss’s dying words (well, MOSTLY in charge, as his wife, Madame Tung has something to say about that), and now he’s got BIGGER problems. Not only is he a cop in charge of a crime syndicate, but another crime lord named Ha (Andy On) wants to leverage the new crime boss into handing over Madame Tung’s meth cook.

Well, midst a whole slew of over the top jokes (one of which has Ha insulting Wu by saying “I just added you on Facebook! And now I’m unfriending you!”) there’s lots of punches, lots of guns, and an undercover cop trying to save a bunch of people (the name of the movie right there). Things blow up, Wu and his buddy Tiger (Vanness Wu) kick some serious butt, and lots of people die in the process.

There’s not a whole lot of sense explaining the movie any more than that, as that is exactly what we get. Ha is the bad guy, Wu is the good guy and Wu is forced to team up with a couple of Ha’s disgruntled employees to take him down. Well, that and LOTS of self deprecating jokes along the way. It’s pure nonsense, but it’s actually rather fun nonsense. The action is quite a bit of fun, and I was really impressed with the choreography. It’s not going to rival old Jet Li or Jackie Chan choreography, but all involved show a ton of athletic prowess. The end battle between Ha’s 2nd in command combat chick and Wu is one of the most impressive of the movie, even if the good old “quick edits” are still there.

I got a chuckle out of the fact that EVERY pistol in the movie was a glock 17. In fact, I honestly don’t think there was but one pistol in the entire film that wasn’t a Glock 17 variant of some sort (FDE or regular black). However, there is one fundamental flaw of the entire movie that is epidemic to just about every Mainland Chinese movie these days. The fact that it’s totally tone deaf. I get that it’s supposed to be a jokey action movie, but the film can’t seem to blend the two genres for anything in the world. The jokes fly hot and heavy one moment, only for the protagonists to be sobbing over the dead corpse of their fiancee the next, then back again to high flying action and more jokes. Rinse and repeat that tactic over and over again to the point where the viewer is sitting there wondering just what exactly they’re supposed to be feeling. It’s a weird feeling that makes the entire venture just a bit frustrating to watch.

As with most Chinese films of late, Undercover Punch & Gun is a varied affair. Dark outdoor shots with nothing but bulb lighting looks yellowed and faded, while grays and dark shadows dominate the rest of the dark times. Outdoor shots can look surprisingly clear and sharp, but I noticed a lot of the time that the white levels were completely blown out (a technique in many a Chinese film I’ve noticed). It gives skin tones a pale and sallow look. I did notice some banding in odd scenes too. Banding crops up fairly often (although never massive), and I actually noticed some REALLY weird macroblocking on Ha’s purple shirt during the drug raid (it actually looks like the dark purple was a massive sea of macroblocking during that shot from the back). It generally looks good with great looking detail levels, but it’s an odd film with the stylization and artifacting, so not a perfect one either.

We have both English and Mandarin 5.1 DTS-HD MA lossless mixes, and both are about equal to each other. The English track isn’t dubbed the greatest, but I noticed the Mandarin is overdubbed a lot of the time. It seems to be mainly on certain characters, so I’m guessing those actors spoke Cantonese and were overdubbed, while all of the Mandarin speaking cast had their recordings done naturally. It makes the silly film feel even sillier, as the overdubbing for said characters obviously doesn’t match up (for all I know it could have been intentional as part of the movies jokes), but is solid enough recording wise. Surrounds get a whole tone of activity with the near non stop action scenes, and the LFE pops quite a bit. It’s a good aggressive mix, but I did notice it feels a bit imbalanced. Dialog could be incredibly loud, and the rest of the mix just felt like it was recorded a couple DB’s lower. Nothing wild, but enough to notice.

The semi-nonsensical story had potential to be a fun action comedy, but the end result a wildly tone deaf movie that can’t seem to figure out just how to implement the jokes, the action, and the drama simultaneously. The action is pretty fun, but the dialog can be a bit cringey and trite, despite the audience knowing full well that the movie isn’t meant to be taken seriously. Ah well, we can’t win em all. The Well Go USA Blu-ray is done solidly enough, with good video and audio, but the typically meager extras we’ve come to associate with these flicks (pretty much nothing but trailers of the movie and other Well Go USA films). Rental, but not a high on.