Transformers: Revenge of the Fallen (#2) 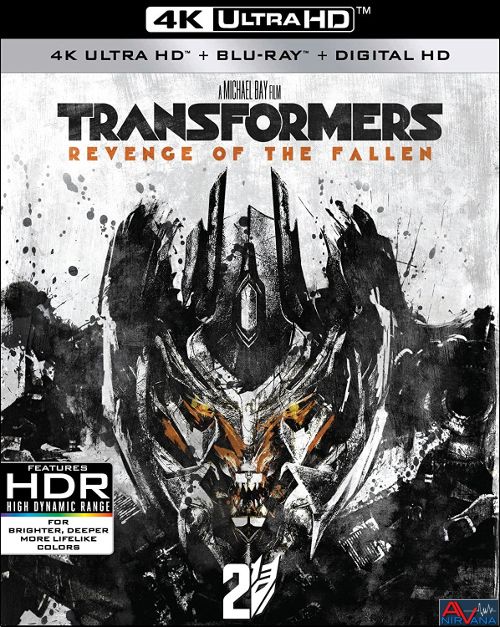 Movie
As with Warner Brothers and the Harry Potter films, Paramount has decided to go back and give us all 4 of the original Transformers movies on 4K, to match The Last Knight that recently came out. I’m never one to complain about 4K UHD content, so I was happy to request these and luckily all 4 are here and available for review in the next week.

After the success of Transformers in 2007, it was natural that Paramount asked Michael Bay to return and do a sequel to his first entry into the series. The money was on the table and Bay’s over the top visual style fit perfectly with the toy series. I was a little frustrated with some liberties he took with the characters and story lines in the 2007 movie, but I really had a GOOD time with the action film, so I was eager to see what Bay would do with a bigger budget and more room to play with. Sadly sometimes lightning doesn’t strike twice, especially in blockbuster film making. Revenge of the Fallen made a gazillion dollars at the box office, but was a horrifying train wreck of a film that ranks as the second worst film in the franchise (next to the latest release, Transformers: The Last Knight). Bay is left to run a muck with no controls on his insanity, and the film suffers from inane writing, action that gets out of hand, and Shia LaBeouf slowly descending into the insanity that would become his real world life in just a few years.

It’s been 2 years since Sam Witwhicky (Shia) and the Autobots saved the human race, and most people don’t even know about it. The Autobots have allied themselves with the human military and are lending their services in hunting down the remaining Decepticons across the globe while Sam is heading off to college. Sam’s only Autobot connection is Bumblebee, who has chosen to stay with the boy instead of fight the Decepticons with his brethren, but Sam is trying to extricate himself from his past. Refusing to allow Bumblebee to come with him to college, he moves into his dorm in an effort to try and live a NORMAL life. The only thing is, a normal life is not something that he’s destined for. Not a few days into his classes Sam goes complete derpsicle when a shard of the All-Spark touches his hand and imprints itself onto the boy, effectively turning him into a human receptacle for the All-Spark’s power.

Now Sam has become the most hunted man in the world, as Megatron (Hugo Weaving) and his master, The Fallen (one of the oldest and most ancient primes who started the Decepticon order), arises from the ashes and lets the world known...they aren’t alone. Their only goal, to get Sam Witwhicky and uses the knowledge in his head to find a hidden source of Energon on this world and used it to consume the sun and bring power to the Decipticons once more, sparking life to an army of baby Transformers that will wipe out all of humanity and rebuild Cybertron once more.

Revenge of the Fallen is an interesting failure (at least film making wise) that somehow ended up making just south of a BILLION dollars when all is said and done. After Transformers everyone expected the sequel to be at least decent, but Revenge ended up being a colossal mess of a film that did everything wrong. Bay was accused of racism in how he portrayed Mudflap and RC (which were at least very annoying while intentionally stereotyped), as well as this being the film that ended Megan Fox’s career in the series. The action is so ridiculously over the top that things get a bit confusing, AND the writing is a work of art in the “so bad you can’t believe it” category. We have Sam’s annoying roommate Leo (Ramon Rodriguez) hanging around for no explainable reason, Decepticons turning into human form (if they could do this, why are they hiding as trucks?), John Turturro overstaying his welcome WAY worse than he was in the 2007 Transformers, and Sam’s mom making worse jokes than she did in the original (and the pot brownie scene was just painful to watch).

I can’t say that the film doesn’t try though. The biggest boon to the film comes in two forms. The first is that the movie really reaches big. Everything about the product just screams “bigger!” with Bay reaching for the stars. He adds in multiple Transformers to the squad, the stakes are bigger, and the action is just ginormous in scope. Sadly he can’t seem to stick most of the landings. The second is something that I never thought I’d say after complaining about Sam and Mikaela’s annoying romance in the first film. They actually WORK on screen. Their relationship expands and matures as the movie goes on, and by the time the credits roll you feel like the two have formed a very solid bond. A move which makes Megan Fox’s untimely booting from the series between the ending of this one and the beginning of Dark of the Moon all the more frustrating.

I’m feeling a bit like a broken record right now. These Transformer films are coming to 4K UHD with excellent results, and while there is some mild deviation in the quality between the 4 films being released on the 5th of December, they are all REALLY similar quality wise. Revenge of the Fallen was also shot on 35mm (with some 65mm) film for the most part, with some IMAX camera work here and there. For those of you who remember the original release was all 2.39:1 framed for the home video release, but there was ALSO a Walmart exclusive called the “Big Screen Edition” that blended in the IMAX full screen shots ala The Dark Knight into the film. Like all the rest in the series on 4K, this UHD disc reverts to the original theatrical 2.39:1 framing, and doesn’t included the shifting aspect ratios of the Big Screen Edition. As with Transformers, Revenge of the Fallen was given a 2K master back in 2009, and that appears to be the source for this 4K edition today. Still, the results are stunning compared at this stage in 4K UHD’s existence, with stunningly brilliant colors thanks to the HDR (and Dolby vision for those equipped) and amazing details. Fine details are excellent, with minute textural differences keeping it ahead of the Blu-ray, but the real joy is the vibrant colors that Bay employs meshing so well with the use of HDR-10 and DV. Those colors just pop off the screen and look so incredibly rich and vibrant. Black levels are deep and inky and I couldn’t detect any artifacts to my naked eye. An all around stunning looking 4K improvement over the Blu-ray.

BAYSPLOSIONS! Yup, that’s what you can expect from this new and improved track. Lots and lots of Baysplosions in full Dolby Atmos. Unlike the first Transformers film, Revenge of the Fallen forgoes the TrueHD track and sticks to the more standardized DTS-HD MA in 5.1 for the second go around. However, the Dolby Atmos improves on that already stunning audio mix by adding in just a little bit more immersiveness all around. The action is so much bigger and larger than life in Revenge of the Fallen and the Dolby Atmos track really benefits from the dimensionality of the mix with copter blades thudding overhead, and the rattling and smashing of Egyptian debris falling all around Sam and Mikaela as they try and get to Optimus Prime’s body. LFE is just crushing, with the Shanghai sequence at the beginning acting as one of the best auditory action scenes in the entire series. The last 35 minutes of the film is one non stop assault on the sense, with the LFE channel just beating you over the head and shoulders with classic Bay bass that just rattles the windows, your teeth, and every bone in your body. Dialog and front sound presence are still impeccable, and hang on for the ride with all their might.

Transformers: Revenge of the Fallen is really the second worst film in the series, right after Transformers: The Last Night. After the great critical response to the first film it was a genuine shock to walk out of the theaters after viewing Revenge. Michael Bay fell REALLY hard after the 2007 slam dunk, and it took a lot of work for him to dig himself out of the pit he made with Dark of the Moon in 2011. I have to admit though, even though it really is a horrible film, the demo worthy nature of the Blu-ray and subsequent 4K UHD makes for a fun home theater event. That is, if you can make it through the entire 2 hour and 30 minute run time. The extras are the same as the already impressive Blu-ray (the audio commentary is on the 4K disc, while all others still remain on the Blu-ray), so while it’s a debacle of a film, it’s a still a glorious audio and video treat which is a definite improvement over the 8 year old Blu-ray. Worth getting if you’re a fan of the series for sure.

Recommendation: For the Fans

Thanks for the review. I always enjoy the special effects from this franchise.

Haha Baysplosions! There are so many Michael Bay-isms that can be thrown out there. Bay-hem!