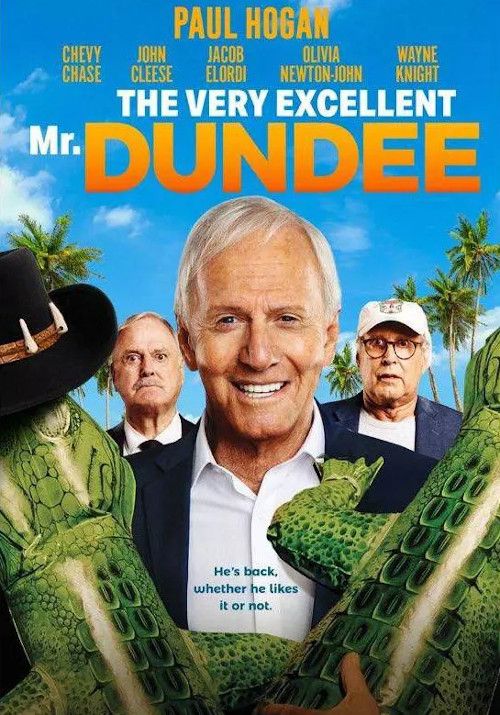 Movie
The Very Excellent Mr. Dundee was originally envisioned as a sequel to the indelible Crocodile Dundee franchise, but the idea was bounced around and rejected multiple times over the last 10 years or so. However, this “sequel” formed with long time Paul Hogan collaborator Dean Murphy into a sort of meta satire rather than any actual connection to the Crocodile Dundee franchise. Ala Curb Your Enthusiasm, the movie is EXTREMELY meta, showing an aging Paul Hogan having fallen from grace in this bizarro alternate reality. His croc days are over, as is his reverence for putting Australia first and foremost in our eyes for years by being a virtual ambassador. Now he’s supposedly getting knighted and bemusedly exchanging face time visits with his grand daughter.

But things sadly go awry when Paul inadvertently turns the entire Hollywood machine against him through a series of accidents. A studio wants to cast Will Smith as his son in a hopeful 4th Crocodile Dundee movie, only for Hogan’s questioning of Will Smith to label hi as a racist. He accidentally makes a fool of himself in front of the BET awards, and then accidentally almost kills a nun at a gala hosted by Olivian Newton John (playing herself). Now completely disgraced, Hogan watches as all of Hollywood (with a revolving door of 80s contemporaries that he worked with, as well as just about EVERY famous Australian actor) bad mouth him to the paparazzi’s.

His poor agent (Rachel Carpani) tries to smooth things over by sending him to the most liked person in Hollywood in what is probably the most sly and “in the know” joke in the entire movie, Chevy Chase (a huge in joke as Chevy is known to be one of the hardest to work with actors in Hollywood) . The rest of the film is a virtual revolving door of famous celebrities as Hogan plays the straight man to their humor. John Cleese stops in as a crazed old man (which is right up his alley) who takes old Paul for a bit of a joyride, and even Wayne Knight is there to drive him batty as an unintended guest in his Hollywood home.

The film really doesn’t seem to have a purpose besides to mildly satirize the “I gotta be liked!” nature of Hollywood. The movie’s just a long series of vignettes with poor Hogan stumbling around from one scene to the next shaking his head at all the insanity of Hollywood. The film even ends with him leaving L.A. and moving back to Australia to live with a lady friend he meets along the way, but once again fails to really deliver any actual STORY. If you watch Curb Your Enthusiasm the humor style can be seen in the same vein, but really I would “Curb Your Enthusiasm”, as the movie itself is mostly devoid of anything humorous, no matter how hard Murphy and Hogan try.

Rated PG-13 for some language and suggestive references

The 2.39:1 framed MPEG2 image is ok, but nothing too wild. I know 480 DVDs don’t look GREAT on modern sets, but this was obviously compressed to blazes and back and crammed on a single layer DVD with minimal bitrate. I pulled the specs for the movie and the image rate barely jumped over 3 mbps (sometimes flickering to 5 for a brief moment, then shooting to 2.8 on the low end) and showed some rather significant compression artifacts. Detail levels are generally nice, but the blatant macroblocking and haziness from the soft source doesn’t to justice to the DVD. Bright daylight shots are generally quite nice, but anything that shows a lot of activity tends to get blocky fast.

The audio is a bit better, but mostly relies on it’s clarity rather than any sense of aggressiveness or adventurousness in the mixing. The film is very VERY dialog heavy most of the time, but the busy L.A. lifestyle lends itself towards some moderate surround activity with people hemming and hawing in the background. The car chase with John Cleese adds some bass and punch to the mix, and overall it’s a great sounding track. Nothing special, but clarity is sharp and there’s no real issues with the sound mix (I was worried with the low video bitrate they were going to starve the track with a 384 kbps bitrate, but it’s a full 448 kbps, which is much appreciated).

• Behind the Scenes
• Theatrical Trailer
• Other Lionsgate Previews

Growing up on Crocodile Dundee I was mildly hopeful for the movie. I knew it was going to be a sort of mockumentary going into the watching, but wasn’t really prepared for how badly the whole thing was constructed. Humor was nonexistent, and the meta satire really didn’t work, mostly due to the fact that there was no story structure to hold onto. It was just a revolving door of celebrities stopping in for a (literal) 30 second cameo, only to vanish for the next one to show up. The DVD that Lionsgate sent over was adequate in the technical specs, but combine that mediocrity with the very underwhelming movie and I have to say “Skip It”.