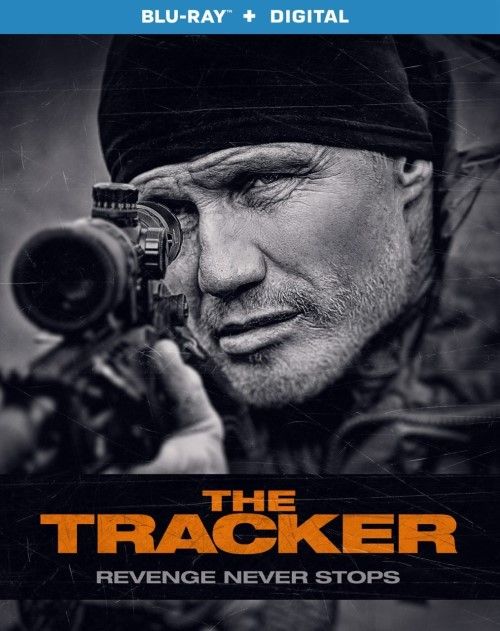 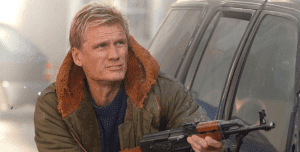 Movie
Growing up in the 80s and early 90s I have a massive weakness for all of the testosterone fueled action stars of that time. Carl Weathers, Stallone, Arnie, Jean Claude Van Damme, Steven Seagal, and Dolph Lundgren, just to name a few. Of the few surviving stars still making movies, Van Damme and Dolph are probably making the best of their DTV careers. Arnie and Stallone came back for a short while, but now they’re back to making dreck that isn’t suitable for consumption, and I still force myself to watch them. I’ve really enjoyed where Van Damme has gone with the remnants of his career, as he’s forced himself to grow as an actor and take on challenging roles that he wouldn’t have in his hey day. Dolph is another one that I’ve grown very fond of and still enjoy his DTV work. The hulking Swede has a sort of craggy and rough charisma that just works for him, and the actor has made a very good career out of being imposing good guys looking to right some wrong. So naturally I was decently interested in checking out his new film The Tracker, only to find out that the poor guy is really slowing down, and pulled a Steven Seagal here. That is, he’s just coasting his way through the movie and making the best of a bad script.

Aiden Hakansson (Dolph Lundgren) had his wife and child kidnapped from him in Italy some 10 years ago, only for his ransom drop to go wrong, ending with their lives being snuffed out by the crime lord Lupo (Bruno Biotta). 10 years have now gone by, and the craggy hunter is back in Italy once more when he gets a call from the police officer who handled his case a decade ago. But when he gets there, the officer in question has committed suicide under questionable circumstances, leaving Aiden with some questions that he wants answered.

Simultaneously, new detective Antonio Graziani (Marco Mazzoli) has come to town, and he’s troubled at the way his superiors have shuffled off Aiden’s case. While Aiden is busy tracking down the people who know what’s going on through brute force, Detective Graziani decides to look at the case from his own perspective and figure out what’s going on before all hell breaks loose in their quiet little Italian village. 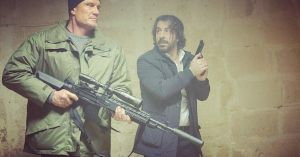 As I said previously, I really do like Dolph Lundgren movies. He’s got a charming persona that is magnetic in nature, and he’s always been a guilty pleasure of mine. Sadly The Tracker is about as dull a piece as one could possibly expect. It’s not that the direction is horribly inept, or that the writing is over the top bad (I’ve seen MUCH worse when it comes to scripts and backup actors), it’s just that nothing really happens. Even Dolph looks like he’s bored out of his mind as he sleep walks through the film. I almost feel bad for the guy as he’s got some good roles in the past, but this seems to be a quick “take a paycheck and go” type of thing.

It doesn’t help that he’s getting stiffer and slowing down in his old age, forcing there to be a lot of choppy camera work and quick cut angles to mask his physical sluggishness, and the general lackadaisical approach to the action scenes. All in all, this is one of the most dull and banal outings that Dolph has done in recent years, and it does his career no service.

Rated R for some violence and language

The Tracker was shot using the Red Epic digital camera system, and looks every bit as cheap as the DTV budget for everything else in the film. The picture is not necessarily pretty, but it’s adequate at getting the job done. The first thing that you notice is that the 2.39:1 framed image is extremely flat, with washed out highlights and milky black levels. There’s some spots of colors here and there that come through, mainly in amber lighting, but this is really a grim and gray looking film. The blacks show some low level noise, and there’s the typical banding, but otherwise it’s fairly artifact free. The clarity ranges from decent to really nice, with the noise and some softness to the picture keeping most of the really great ones from dominating the image. Some shots are really noisy and soft, while others can be really crisp with good textural details.

The 5.1 DTS-HD MA track in English found on the disc is a little better than the video is, giving us a very solid listening experience. The surrounds and LFE channel are mainly utilized during the score and the end battle sequence, with the rest of the track being firmly locked up front in the mains and center channel. Dialog is clean and clear, but while they advertise the track as an English one, it’s really an English/Italian hybrid as there is a LOT of Italian throughout the film’s run time. It’s a solid performer, and while it’s not exactly a big massive action track, it ticks off enough check boxes to be a very satisfying mix in general.

I wish I had something more positive to say about The Tracker being that I wanted to actually like it. But sadly the script is banal, the acting wooden, the characters poorly written, and just generally cheap on all aspects. The video quality is only moderately good, and the extras are nonexistent almost. Even for a big Dolph fan such as myself I’ve had to step back and say “yeah, there really isn’t a whole lot to like here”. Honestly, it’s best skipped even if you are a big fan. Sad to say.