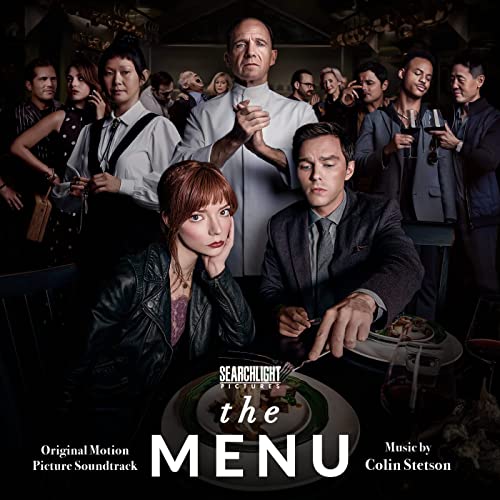 Movie
There’s a reason I love the horror genre. Unlike most other genres it has the ability to thrive midst the mud, as well as rise to the heavens. It can be both DTV garbage or blockbuster cinema. Arthouse or mainstream. Bloody or psychological. There is just so much depth and diversity in the film genre that has created so much joy in this jaded reviewers heart. Coming out in November against Marvel blockbusters, The Menu flew under the radar and pretty much vanished with nary a word spoken about it. However, it has Ralph Fiennes in it, and Anya Taylor-Joy is such a delight to watch that I was eager to taste what The Menu had to offer before I even heard a whisper of a review about it.

The night is special. Chef Julian (Ralph Fiennes) of the famous Hawthorne restaurant (a restaurant that only the elite can really enjoy, and even then you have to be someone special) has prepared a magnificent meal for special guests. One such set of guests is Tyler (Nicholas Hoult) and Margot (Anya Taylor-Joy) who is a last minute stand in for Tyler’s previous girlfriend. The night is lovely, the chef has everything prepared, but the night is ANYTHING but what the guests were expecting. After a short single course it’s pretty obvious that something is not right. Margot is feeling the vibes, so to speak, and has her suspicion of everyone around her. Unfortunately for the young lady her suspicions turn out to be right as Chef Julian soon informs the guests that tonight is a night of punishment. Each and every person in the room has a sin regarding Hawthorne that needs to be expunged. And this night of decadence and death will be there very last.

The Menu is a tightly woven story of dark comedy and horror, with Ralph Fiennes and Anya Taylor-Joy taking front seat with their repertoire. The story is told course by course, with each addition to the menu pulling back the onion like layers of the plot, showcasing just why the people in the dining room need to be punished, and actually brings Chef Julian and his many failures into that same decree. Mark Mylod’s direction is actually rather impressive, with incredible filmography and a score that accentuates the hauntingly upscale vibe that Hawthorne is supposed to be, despite the blood, guts and hilarious twists of fate.

My only complaint comes from the fact that The Menu is just not as smart as it thinks it is. Either that, or that is the opinion the viewer is supposed to leave with, and that IS the point. Either way, much like Chef Julian’s ramblings about the cuisine, the film’s plot sort of has very little to say about anything outside of the fact that the Chef is madman, and people are stupid sheep. I tried to get some hidden meaning from the story, but at the end of the day I personally feel that this is just a well done dark comedy/horror film that doesn’t have whole lot to say outside of a few cliches and a WONDERFUL ambiance and setup. In fact, the unfolding of the story is almost brilliantly simple, with no attempts at high art or hidden meanings outside of the carefully constructed meal.

Rated R for strong/disturbing violent content, language throughout and some sexual references.

The Menu comes out today on Blu-ray, but sadly no UltraHD 4K release, even though there IS a 4K release available digitally. Sadly we only received the HDX 1080p digital copy, so my thoughts will probably more mirror the Blu-ray release. Either way, this is a stunning looking transfer, with a dark gray and black coated stoic look that is razor sharp. Fine details abound everywhere, from the intricately designed food courses, to the wood flooring and modern gray toned aesthetics of Hawthorne. Blacks are deep and inky, though I noticed a decent amount of banding in some of the night time shots (such as the men having to escape the staff). Otherwise, this is a well done image that certainly will look fantastic on Blu-ray.

The DD+ 5.1 track is quite the crowd pleaser too. While it may not be Atmos nuanced, it is still a superbly atmospheric track that thrives off of the mellow score. It is as much a part of the narrative as the story itself, lifting you mood up, dropping it down into feelings of dread and discomfort, and even a few melancholy tunes as we find the true history behind Chef Julian and his fall from grace. Dialog is spot on perfect, and surrounds filled to the max with the hubbub of the chef’s kitchen behind the audience, as well as the afore mentioned luxurious score.

• First Course: Take a seat at the table as director Mark Mylod delves into some of the key ingredients that went into crafting The Menu. Meet the renowned chefs and food stylists who brought their culinary expertise to the set.
• Second Course: Savor the world-building of Hawthorn, from kitchen “boot camp,” to the meticulous details of the production design. Hear from the cast and writers about the director’s naturalistic approach to capturing the nuances of the performances.
• Dessert: Dig into the creation of the s’mores sequence as costume designer Amy Westcott explains the painstaking process of sewing ponchos made of actual marshmallows. The cast discusses chocolate hats and the absurd predicament of their characters.
• Deleted Scenes

The Menu is an interesting film. On one hand I was absolutely mesmerized by the impeccably designed set, course layout, and amazing cinematography. Ralph Fiennes is delightfully evil and hammy, while Anya Taylor-Joy is superb in her role as the wild card of the movie. Everyone else is fairly cookie cutter and disposable (even the highly charismatic John Leguizamo), but that can’t take away from the delicious mood and ambiance laid out for us. It may not be the best horror movie of 2022, but it is certainly a stunning showpiece with some major faults in the story telling. While those faults may be frustrating, I seriously enjoyed it for not being overly pretentious and trying desperately to make itself out to be smarter than it is (which I am now starting to believe was an intentional wink and nod to the audience by Mark Mylod), and still well worth checking out if you’re a fan of psychological horror film.

Interesting it is. Strange but well acted and will likely become a cult classic. I enjoyed it. Thanks for the review.