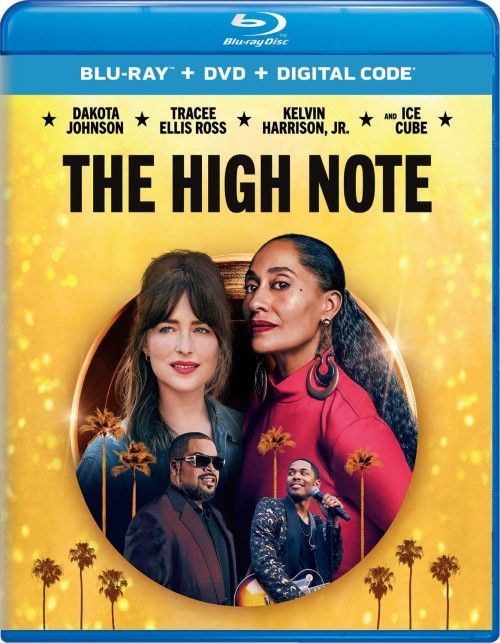 Movie
The High Note is another victim of the Covid-19 pandemic, being released right during the middle of it with little, to no, fanfare. It did moderately well on demand (though not as gangbusters as the latest Trolls flick), which pretty much made me completely forget about it’s existence until the review disc showed up on my door. Needless to say, I was more than pleasantly surprised as the film was just what we needed for this pandemic. A reason to smile and tap our toes to some good music, and warm our hearts with that “you can do it!” attitude of success that we all love and crave.

Set in the musical mecca of Los Angeles, The High Note focuses in on an aging singer named Grace Davis (TV’s Tracee Ellis Ross, who just so happens to be Diana Ross’s daughter) who has lived a fantastic life of musical success for the last 30 years, but is now facing the dilemma of most aging musicians. That being, she hasn’t put out an album in a decade, and she’s now being faced with the decision of becoming a “legacy” act, much like the 80s rock stars are dealing with right now (farewell tour after farewell tour).

Her one confidant (in a sort of rich celebrity to poor plebeian sort of way) is her personal assistant, Maggie (Dakota Johnson), who runs her errands, does her scheduling, acts as a sort of unpaid therapist, and basically is her personal gofer for everything. But Maggie has her own hopes and dreams, the biggest of which is to become a music producer. She desperately is trying to make her name known, but without having any cred in the industry, she’s relegated to mixing Grace’s new upcoming “live greatest hits” album on the side in hopes of being noticed. When she’s basically put in her place by Grace’s manager Jack (Ice Cube), Maggie decides to strike out on her own and discovers a young (if not overly wealthy) singer named David (Kelvin Harrison Jr.) who has the voice it takes to make it big, but not producer to get his personal sound polished enough to be signed.

Soon she’s juggling two jobs. The first being an assistant to Grace, the second being a fly by night producer for David, and as she gets more and more involved and in over her head, she’s forced to sink or swim and make the big decisions that could affect her life forever.

Honestly, I wasn’t expecting much from The High Note. It had a mediocre trailer a few months back, and then it basically fell off the radar until the disc came out. However, the film was way better than I expected, bringing back memories of Melanie Griffith’s Working Girl (Dakota Johnson is ironically Melanie’s daughter) with a bit of a modern vibe. Dakota Johnson is probably STILL the weakest link in the movie (her range is not as bad as Steven Seagal or Kristen Stewart, but still, she’s kind of flat), but her sort of mousy naivety actually works for the role of Maggie. She’s shy, timid, and so out of her league in the film that her desperately blank looks actually fit the stressed out wannabe producer to a T. On the other hand, Tracee is downright phenomenal as Grace and Kelvin Harrison Jr. does a good job as the romantic interest (and there’s a twist with him near the end that actually is pretty obvious, but still a welcome twist nonetheless). The singing is good, the actors do well together, and the story is that old fashioned “feel good” stuff from years gone by. It fits well in the depressing times of being stuck in doors because of a world wide pandemic, and is uplifting and fun enough to have me tapping my toe to the music the whole time.

Rated PG-13 for some strong language, and suggestive references

While I know that the film industry and home media industry is in a massive slump due to the Covid-19 pandemic, I still REALLY would have loved to have seen The High Note come out on 4K UHD considering that it was sourced from a 6.5K Arri Alexa shoot and given a native 4K master, but the Blu-ray is still a wonderful disc. The image is absolutely dazzling, with a slightly warm and intentionally gauzy look (at least for the first part of the film) that shows highlights of amber and banana yellow as the overall “tinge” of the picture. The details are startlingly clear, with pinpoint facial details and long shots alike. The scenes in the recording studio look a bit dim and flat, but out in the world of glitz and glamour (such as Grace on stage for her party) showcases tons of neon colors, primary shades and deep inky blacks that are sickeningly deep and dark. There’s a few moments where the gauziness robs the picture of some small bits of detail, in my opinion, but overall this is an excellent looking film.

The High Note comes with a single 7.1 DTS-HD MA track for the disc and it’s a powerhouse musical track for sure. The mix starts out with a throbbing and energetic song that just fills the room with deep bass and rich vocals, setting the mood for what’s to come for the next 2 hours (ish). The 7.1 mix is just amazing to listen to, and the music filled track just throbs with energy and excitement. The quieter moments are still well done with good presence in the front of the room, but perfectly balanced with background music, only to have the rest of the track just RIPPLING with a more present musical sound throughout. Surrounds are wildly active with the before mentioned music, but also handles the hustle and bustle of a busy L.A. party, as well as the ambient noises of driving in traffic as well. Subs are almost always kicking, and the vocals are lovingly placed front and center in the track. This is one amazing track and easily the best part of this whole Blu-ray.

• Deleted Scenes
• The Dream Team: Inside the Creation of THE HIGH NOTE – A behind-the-scenes story of how the film came to life-including screenwriter Flora Greeson's story and experience as a real Hollywood assistant; how filmmakers created the look of the film; the musical team behind the original tracks; and some of the iconic Los Angeles locations.
• Making A Legend: The Grace Davis Story – Tracee Ellis Ross embodies the character Grace Davis, a superstar struggling to stay relevant in the ever-changing music industry. Featuring behind-the-scenes footage of Tracee as she 'becomes' Grace-in the recording studio, on stage, and at home – we'll learn what it takes to become a musical legend.
• LIKE I DO: Original Song Music Video

The High Note is Dakota Fanning’s Working Girl, and it’s kind of sad how the pandemic de-railed this from theaters. However, it’s kind of a good thing too as I mentioned up above, and either way, the film is more than entertaining and one of my surprise films of the year. The music is top notch, the story is warm and inviting in that sort of “inspiring” sort of way, and it fits that “comfort food” niche quite well. The Blu-ray is stunning to hear and view, and even though there’s not a TON of extras, there’s enough to satisfy most fans who are simply starved for extras on new releases these days. Worth checking out.

Was intrigued and rented it last night.

Getting tired of watch movies that explode, shoot, rape, kill and loved watching a film that was relaxing, my wife enjoyed and one that has a happy ending.

Thanks for the review