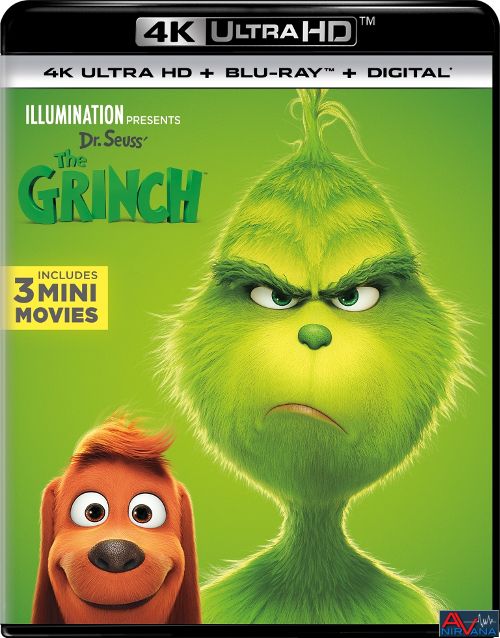 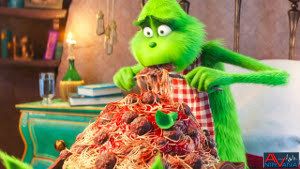 Movie
The story of the Grinch and Whoville is about as common a staple for this movie goer’s Christmas time rotation as watching A Christmas Story or Charlie Brown’s Christmas. Whether it be the 1966 animated classic (which was voiced by horror icon Boris Karloff), or Jim Carrey’s wild and wacky live action adaptation (which was brought into my life due to my wife’s over exuberant love of that version), the green man and his bah humbug to joy transformation will all be apart my Christmas time. I can sing the songs by heart, recite Jim Carrey’s jokes, and smile along with the Grinch’s heart going three sizes that day with the best of the kiddy winks, and not feel an ounce of regret. So you can be sure that I was clamoring at the chance to go see Benedict Cumberbatch (who now voices the not so jolly green giant) bring his particular flair to a classic story. Coming out the theaters I felt a bit confused. It wasn’t that I didn’t recognize the story. It’s not even the songs (although most of them are remixed or just references vs. being prominent like the previous two iterations), but the movie itself just felt a bit flaccid and weak. And while I enjoyed it, there was this sense of something missing.

The story itself is pretty much what we’ve all come to enjoy and love over the last 52 years. The Grinch (Benedict Cumberbatch) is the grump old man who lives up on Mt. Crumpet, AWAY from the joy and kindness of Whoville and the Whos. While the Whos are going gaga over Christmas time, the Grinch is grinding his teeth in frustration at the jolliness and cheer, and his only companion is his dog Max. When a shortage of food brings the Grinch into Whoville for a supply run, the grumpy guy finds out that the mayor of Whoville (Angela Lansbury) has ordered the celebration to be THREE TIMES as big as it normally is. Chuckling at the absurdity of the thought, the Grinch goes back to his home on the mountain only to witness the flying in a Christmas Tree so large, so gaudy, sooooooo irritating that he is forced to take care of the matter himself. Which means dressing up as Santa clause and stealing Christmas to teach these do gooders a lesson.

Simultaneously we have the story of young Cindy-Lou Who (Cameron Seely), a precocious young child with visions of sugar plums and presents in her head. Despite her proclivities for excitement and impetuous things, young Cindy-Lou has one burning Christmas wish on her heart this year. She desperately wants Santa to give her mother a helping hand, as the single mother (played by Rashida Jones) is having a hard time with 3 kids and no helping hand to allow her to live a normal life. Something that Cindy-Lou has seen through despite her mother’s brave face. 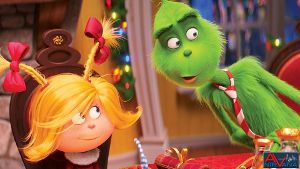 The Grinch himself is seen as a rather sympathetic character, with a lot more niceness on the surface compared to the animated and live action Jim Carrey versions. As the story unfolds you see his side of the story and WHY he hates Christmas so much. His deep rooted scars of living without Christmas as a child is a source of constant pain, and the holly jolly explosions of celebration that happens each year just reminds him, like a stab to the heart, of the fact that he’s still alone with only his pup Max for company. It’s an interesting twist on the old character, and sort of humanizes him (or whomanizes him if you will) and makes him less of a villain. An interesting move, but one that makes him a little TOO relatable, as part of the fun of the story is watching the diabolical Grinch steal Christmas with evil glee. The heart warming tale is a little less fun without that sort of twisted flair (although Cumberbatch does his best to give him a warped level of evil that just doesn’t shine through the pain loneliness that he exudes).

There’s something a bit superficial about The Grinch. Part of it is him being too relatable, and part of it is the music. All of the classic and iconic songs have been remixed and redone to the point of non recognition. The infamous theme song is just hummed in the background at the beginning of the film, and the only song that really stands out as something more than a pop/R&B remix is the Whos singing at the very end. It makes the film lose some of that “punch” if you will. The one thing that actually keeps you emotionally invested n the film is Cindy-Lou Who and her child like desire to help her mother out. It’s sweet, kind, and totally in line with the type of character she has been portrayed in other iterations. 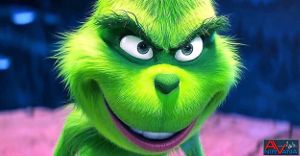 Shot digitally and then transferred to a 2K digital intermediate, The Grinch looks like many animated films that get upconverted. The Blu-ray was a 5/5 stunner, with luscious colors and crisp details, and the 4K UHD shows some slight improvements in textures and fine details, but only mildly so. If you look closely you can see some distinct nuances to the green fur on our “villain”, as well as some little snow effects that stand out. Otherwise it’s rather similar in detail level to the already stunning 1080p counterpart. The real differences come with the use of the HDR (and Dolby Vision for those who have it), as the colors just dazzle on the 4K edition. Reds, green, opulent whites and pale blues, they all stand out with jaw dropping clarity and saturation. While the Blu-rays colors are excellent, and the detail levels can ALMOST hang with the 4K’s upscaled image, the colors just really don’t stand a chance. The black levels in the Grinch’s cave are also deep and inky, showing more natural detail and a complete lack of banding. This is a good upgrade, but a moderate one for sure, with some places showing great increases (colors and the use of HDR/DV), while others are very similar (general animated detail levels). 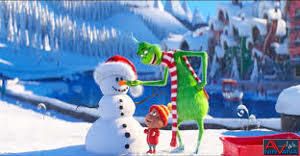 Universal once again places the advanced generation Dolby Atmos track on BOTH the 4K UHD and the Blu-ray (including the 3D Blu-ray, something Warner needs to take a cue from), so this review will be the same no matter which of the formats you choose it on. Universal’s Atmos track is rich and vibrant, with a strong sense of low end for the Danny Elfman score, as well as rich sense of immersion from the music and ambient noises of the Grinch swooshing through the snow. The track can be a bit front heavy at times, with the dialog and mild ambient noises up in the front of the room dominating the sound stage. However, there are some really neat moments that employ hefty use of the surrounds (and of course during the musical numbers), and the LFE gets a kick in the pants with the initial sleigh ride run, and the thundering hooves of Fred the fat reindeer sounding out. It’s a good mix, and a solid Atmos track, but also one that won’t push your system to the extremes.

• Who's Who in Who-ville (interactive map) – There are so many interesting characters that call Who-ville home that it's hard to keep track of them all. This "Who's Who" pop-up book uses animation to create a virtual storybook that takes us from Who-ville to Mt. Crumpit.
• "You're A Mean One, Mr. Grinch" Lyric Video – Tyler, The Creator puts a modern spin on the Seussian Christmas classic.
• Mini Movies
- Yellow is the New Black – Before they all make their big escape from prison in Despicable Me 3, a couple of lucky Minions get a taste of freedom as they break free with the help of one of their fellow human inmates.
- Dog Days of Winter – Max braves the harsh winter weather and an uncooperative Who to bring a sick Grinch his favorite hot tea.
- Santa's Little Helpers – Fan favorites – the Minions – are back for another adventure! Having been accidently dropped off at the North Pole, our Minion pals make the most of the situation by trying to become elves.
• The Making of the Mini-Movies – Mini in size but not in heart, these short films are fan favorites. From the Grinch and Max to the Minions – you'll explore the themes of each of the mini-movies through the eyes of the filmmakers who made them.
• From Green to Screen – It takes a lot to bring grumpy green to your home screen. This inside look at the making of Illumination's Dr. Seuss's The Grinch features interviews and behind-the-scenes moments with the cast, filmmakers and artists whose hearts have all grown three sizes bringing this classic tale to life.
• Illuminating THE GRINCH – Using filmmaker and cast interviews, concept art and progression reels, we take a behind-the-scenes look at how the characters evolved from initial sketches to fully realized characters.
• My Earliest GRINCH Memories – The cast and filmmakers of Dr. Seuss's The Grinch reveal their earliest memories of the grumpy green character and the enduring appeal of this Christmas curmudgeon's journey to redemption.
• Grinchy Gadgets – From his body-size blow dryer to his moving mechanical chair, from his catapult to his dog drone-rig and more… you'll get to explore the wondrous world of Grinch's gadgets.
• "I Am The Grinch" Lyric Video – A stylized look at Tyler, The Creator's original song created just for the film.
• Songs From His Little Heart – Take a deep dive into the toe tapping beats of Dr. Seuss's The Grinch. From score to specialty songs, you'll hear from the film's A-list musicians on what it took to create the music behind the movie.
• X-mas Around the World – Every culture practices Christmas in a slightly different way. We'll highlight some of the more fun permutations of the holiday around the globe.
• Cindy-Lou's Yule Log – Nothing says the holidays quite like an animated fireplace blasting fake heat from your living room television. Just in time for winter, we'll recreate Cindy-Lou's living room on Christmas Eve for all to enjoy.
• Production Babies – A celebration of the babies born to the filmmakers during the production of Illumination's Dr. Seuss's The Grinch.
• Any Who Can Draw – Hosted by an Illumination artist and head of story Mark O'Hare, you'll see step-by-step how to draw some of your favorite characters from this beloved holiday classic; Grinch, Max and Fred!

The Grinch is a solid enough entry into the The Dr. Seuss world, but it is also the weakest of the major motion pictures (both animated and live action) in my humble opinion. It plays just a little too nice, and ends up being a bit flaccid in the story department as it is a little TOO long for the animated venture. With that being said, it’s still an enjoyable little animated film from the creators of Despicable Me and The Secret life of Pets. The audio and video are excellent, and the extras are quite packed with content (something that is less and less common in this day and age in the physical film market). Worth a decent watch for sure.