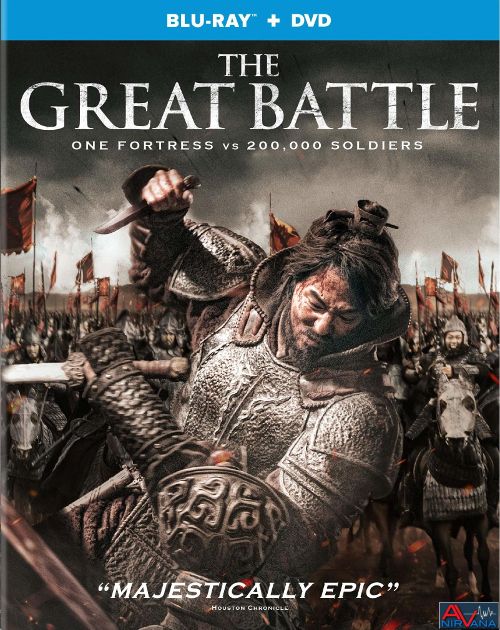 Movie
There’s some inspiring about a rag tag group of heroes who are fighting an uphill battle. The idea of a last stand carries with it a sense of bravery, honor, and awe that stems from wanting to root for the underdog. The tale of the last stand is nothing new in folklore, with films being made about everything from The Alamo, Horatio’s last stand, The 300 Spartans, and many many more. When reading up about The Great Battle before I did this review, I found that the story is one of legend and lore, which means that a lot of the facts have been stylized or romanticized over the years. Many of the stories about the infamous siege of Ansi have conflicting facts, characters are different, but the end result is always the same. A legendary last stand of 5,000 Korean men against the might of the Chinese Tang empire, who is bringing with them the full weight of 200,000 men.

The Great Battle doesn’t start out with the famous Yang Man-chun (In-sung Jo), but rather an unknown recruit named Sa-mul (Nam Joo-huk) who is partaking in a particular gruesome battle between the Korean army of Goguryeo, and the Chinese Tang empire. Barely escaping with their lives, Goguryeo general Yeon (Yoo Oh-seong) retreats to the capital where he plans to hole up and hope for the best. The only force left in the way of the 200,000 strong Tang army is the little mountain fortress of Ansi, which is commanded by a traitor to the crown, one Yang Man-chun. After refusing orders and not lending aide for the infamous retreat, Yang Man-chun has garnered an enemy in the form of General Yeon, who dispatches young Sa-mul to assassinate the commander in case the Tang army doesn’t finish him off.

Upon arriving at Ansi, Sa-mul realizes that Man-chun is not the monster that Yeon has made him out to be. Instead the commander is a caring man who wants to do nothing but protect his people, despite the military coup of Yeon and his war mongering notions. Abandoning his job as an assassin, Sa-mul sides with the charismatic commander and together they hunker down and prepare for the inevitable defeat at the hands of the Tang army. However, just because you’re going to die doesn’t mean that you have to make it easy for the enemy, and the fortress of Ansi has a major advantage. They’re backed up against a mountain, and the Tang General Taizong (Park Sung-woong) has only one approach, straight forward into the mouth of a small force with their backs against the wall and nothing left to lose.

Those who aren’t familiar with Korean lore and history may have to struggle a bit to figure out who is who, and what emotional resonance the characters have, but it doesn’t take long to figure out who is the good guys, and who is the bad guys. At that point it’s just a matter of cheering for commander Man-chun and the people of Ansi as director Kwang-shik Kim crafts an almost mythical tale of heroism and valor as the force of 5,000 defends themselves from a force 40 times their number. It’s pretty obvious from my readings that Kwang-shik Kim played fast and loose with the historical facts but that’s pretty easy as the historical records of the Goguryeo empire are nearly non existent at this point outside of handed down stories and legends. The end result is an action packed film that allows the audience to revel in the battle prowess of the legendary Ansi warriors, complete with 300 (ish) battle sequences, complete with slow motion hacking and slashing, as well as an uplifting ending that further reinforces the near godlike status that the siege has garnered over the centuries.

I’m not familiar with a lot of the Korean actors of this particular film, but all in all they did a fantastic job. In-sung Jo is amazing as the charismatic commander of the Ansi fortress, and his second in command lieutenants have a sort of Gimli and Legolas camaraderie/rivalry that puts a smile on my face. The film does have a few flaws, mainly with superfluous secondary story lines that get interwoven into the battles, but the film is a non-stop action reverie with blood guts and gore galore. The tactics and sheer ferociousness of the battles is infectious and exciting, the tension palpable as you wonder just who will live and who will be dead at the end of the day. The CGI is a bit wonky at times, and while I wouldn’t have minded about 20 minutes trimmed from the run time, I enjoyed The Great Battle a LOT more than I expected to. It doesn’t try to be TOO epic or sweeping, but focuses on a near mythical battle of man vs. giant, and does so with surprisingly entertaining results.

I couldn’t find out much about the cameras or resolution of the master used for this release, but The Great Battle is a very nice looking Blu-ray that’s only major flaw happens to be the ubiquitous banding that Well Go USA is known for. Luckily the banding is not too wild, and only shows up here and there midst the carnage rather than being an eyesore. Once you get past that little quirk the digitally (I’m assuming) shot image is really sharp and clean. You can see every bit of grime in the pores of Man-chun’s face, as well as the nasty little squirts of blood and shiny armor dotting the landscape. The backdrops of the mountain fortress are equally details as well, and while the film can look a bit dusty and bleached at times, showcases some good primary colors in the form of costumes and bloody.

The Korean 5.1 DTS-HD MA track is punchy and powerful, utilizing all 6 speakers with great aplomb for the copious battle sequences. Dialog is always well placed and where it should be, but the surrounds really shine with the score and the encompassing sounds of sword play. In fact, I was a little shocked at how immersive the track really is with he surround usage. You can hear arrows whistling by overhead, as well as the background clashes and screams as men battle in the fortress compound. LFE is deep and guttural, but is not as hot as I would have expected. However is not necessarily a bad thing, as the track’s LFE channel is still very precise and evenly balanced. The rumbling of the army carries appropriate weight, and the clashes and smashes of rocks smashing into the fortress walls allows for some powerful moments. Clarity and tonality of the low end is superb, as each hit and each wave of bass is unique and balanced, instead of being bloated and one noteish as can be the case with over cooked action tracks.

​
I really enjoyed The Great Battle, and while it’s not some massive CGI epic like 300, or as inspiring as Braveheart, The Great Battle is a fun film that features some amazing choreography and visceral battle scenes. The movie doesn’t try to be anything more than what it is on the surface (a survival film), and that’s what keeps the movie from becoming an over dramatic mess like so many other epic Asian films of recent note. Instead of getting TOO involved with historical lore that only those close to the source material will understand, The Great Battle allows everyone easy access into the inner circle, painting good guys as good, bad guys as bad, and letting us cheer for them with bloody spectacle. Well Go USA brings forth a technically sound Blu-ray that sports good video, great audio, and the very typical anemic extras that we’re used to. It’s got a few flaws, but The Great Battle is a fun watch and well worth checking out if you’re into Asian action movies.