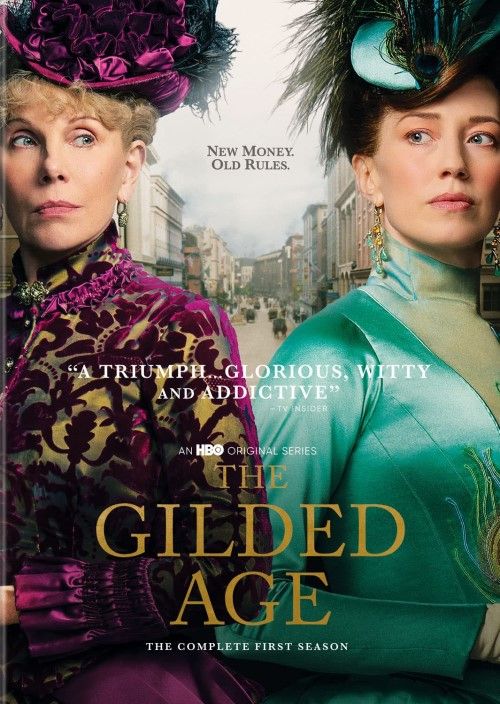 Movie
Julian Fellowes of Downton Abbey creation fame has decided to branch out once more, this time going after the elites of New York in the late 1800s in The Gilded Age. Transferred to HBO for a more “mature” audience, the show takes rather convoluted and deliciously fun take on the social elites of America back before Unions and the middle class took over during the 1900s.

A family with “new” money moves into New York City and of course the “old” money elites of the era are not happy about letting a lowly commoner turned rich into their social circle. All in the middle of this elitist warefare is Marian Brook (Louisa Jacobson), a young woman whose father has just died. her late father died leavin her $40, so when she is forced to move in with her wealth aunts Agnes (Christine Baranski) and Ada (Cynthia Nixon) in New York, it stirs up a bit of a hubbub among the social climbers of the day.

The show is very much reminiscent of Downton Abbey at first glance. Rich and well to do elites having to deal with their quibbles and wars and romances on screen, all the while dancing around each other and making social climbing a bit of a “game” for all involved. However, as the season progresses it takes on a flavor of it’s own over time. We get to know the servants, the housekeep, the gossipy and power hungry Russells across the street, as well as Marian trying to be a bridge between both worlds in upper New York City.

One thing to note that really changes the flavor of the soup is the location. Downton Abbey is very much a British show, with British ideals about the upper crust. This series is distinctly American, with our sharkish views on the wealthy garnered after years of escaping FROM the whole idea of British elitism. It’s much more business based, with tycoons of industry and power instead of rich inherited titles as in England. It’s a nice change of pace, while still keeping much of the same taste and texture as fan favorite show Downton Abbey.

Season one is a fascinating watch, even if it can be a bit rocky at times. While there is a dozen different sub plots and characters to focus on, we’re really watching Mrs. Russell as she moves to New York and tries to fit in with the old money folks, and young Marian trying to keep her independence from the trappings of her family wealth and social expectations. There’s drama, romance, sorrow, pain, and back stabbings galore, in an all American fashion that really fits in well with Julian Fellowes take on the social elites of our world.

The Gilded Age: The Complete First Season comes to DVD (sadly no Blu-ray) in a rather middling video encode with 3 episodes per disc. The actual encoding is decent, with bright primary colors (the blue of dress, the ornate clothing, and the green of the Manhattan lawns), but the image is plagued with tons of blocking, very soft textures, and text and lettering on screen are distorted. You can tell the 3 episodes have been compressed pretty heavily, as it’s one of the more “meh” looking TV images that I’ve seen since The Blacklist Season 8. Not to mention, the Menus follow Warners “minimalist” patterns as of late, as they look like they were created using a basic DVD menu creator software from the 2000-2004 era.

The audio actually fares a bit better than the video. It’s 384 kbps compressed Dolby Digital instead of the more common 448kbps audio, but it’s still very solid. Vocals are the main focus of the show with the period piece music interspersed to fill out the surrounds and low end. Dialog is crisp and clean as usual, located right up front in the center of the room, and surrounds get mild workouts throughout with said score and the general hubbub of New York City. There track can sound a BIT thin on the high end during some of the most intense moments, but nothing I’d really worry about. Still a very solid mix for a dialog driven TV show.

• All That Glitters: Creating The Gilded Age (Exclusive for DVD)
• Old Money vs New: The Heart of the Matter
• Who’s Who Featurettes
• Invitation To Set
• Carrie Coon BTS
• Writing Peggy
• Inside the Episodes
• Designing The Gilded Age

The show is a solid entry, but not without flaws. The pacing can be a bit off, and while I really liked the characters, some of them took a bit getting used to. Christine Baranski of course absolutely scene steals like the veteran actress she is, and Louisa Jacobson actually does a very solid job as Marian. I was a bit sad that this didn’t get a Blu-ray release, as the DVD video quality is just middling, and I would have loved to have seen this in HD. All in all, a solid release that should be very intriguing to those of us who spent years getting involved in Downton Abbey.