The Flash: The Complete Seventh Season 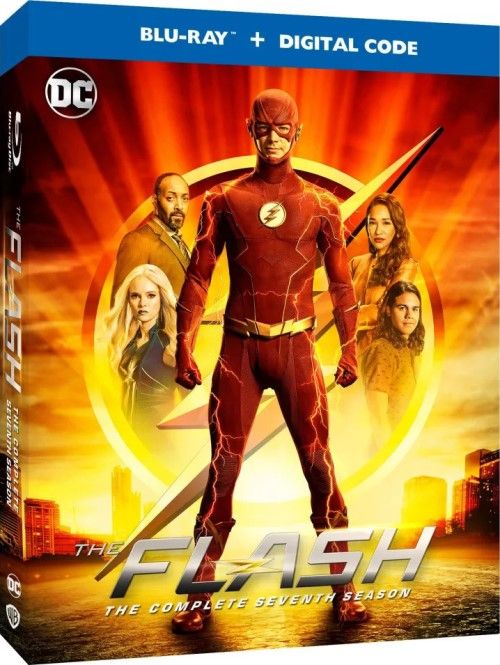 Movie
“My name is Barry Allen, and I’m USUALLY the fastest man alive!"

The Flash was able to resume production this year after the shutdowns were finished in California, but they had to accommodate a later production and release date than usual as result. No biggie, as a few months isn’t the end of the world and rather understandable considering all of the hullabaloo that was caused by the pandemic. Either way, things are back on track and the highest rated DC Live Action show on The CW is still hitting hard on all cylinders…..well….at least it’s TRYING hard on all cylinders as the show has finally started to officially wane for me.

I’ve been one of the biggest proponents of The Flash over the last 7 years. It was better than Arrow (which was the show runner of the Arroverse) and it had the most good seasons out of the DC Live Action shows. However, the last few seasons started to slip, and I think the show just isn’t going to gain it’s traction back. As a long time rabid watcher of each and every season I had to actually to work to gain enough energy to finish this year’s run, even though it continued on with the big villain setup from last season. I guess I finally have Flash fatigue, as the show has fallen into the same traps as Arrow did, and gotten a bit long in the tooth.

Last season’s cliffhanger left us with the super brilliant and evil Eva McCulloch beating team flash, and still out and about in Central City and Iris West still out there in the mirror universe due to Mirror Monarch. Naturally he finally gets one over on Eva and gets Iris back, but in the process he unveils two more threats to the city. The first will eat at his marriage with Iris, the other is ANOTHER speedster from the future who is bent on destroying the entire city unless The Flash gives him what he wants.

I’m not gonna lie here. I wanted to like the last season, and hoped that they could gain some footing and go upwards from last years mediocre run. Sadly it just slips and stumbles even more, falling prey to one of the BIGGEST blunders that Arrow suffered from. Too many superheroes in the kitchen. Not only do we have the addition of his daughter to the team, we get Impulse added, as well as his “mother” in speed form, and of course a new villain speedster who want’s The Flash’s power for his own. After a while The Flash is once again side lined for Cisco, Killer Frost (who has been BUTCHERED beyond believe the last several years from her comic book form) and every other addition to the team. Tom Cavanaugh has been over used so much that it’s actually a relief that he and Cisco are actually leaving the show and not coming back next year.

The villain is a big let down as well, as he’s just another speedster doing what speedsters do. Craving more speed. Even the addition of a classic villain (in his most hate form) can’t save the end battle with the villain. But hey, maybe that’s in part to them having a speed force lightning sword fight for the finale (seriously, you can’t make this stuff up). The show just simply has too much on its plate and the series has devolved into “Team Flash” ala “Team Arrow” did in its final seasons. I’ll still continue to watch season 8, but the Flash fatigue has really set in and I’m not sure it can last more than one more year before the show runners retire it.

Like usual, this is the repetitious part of the review simply because I've said the same things over and over again the last 6 years or so as each of the season releases look incredibly similar. The Seventh Season is bright and shiny affair, with luscious reds and purples and other primary colors for costumes, while still showcasing great night time battle scenes. There's some banding around the CGI and during the battle at the end I noticed some crush, but overall it's a very clean and digitally glossy TV show appearance. I did notice that the CGI looked a bit weaker this season, and the costuming more amateurish, but I'm assuming a budget cut was involved for that one. Overall it's a standard WB TV release with great video.

Over the years the crew at Warner Brothers have created stellar sound mixes for the show, and it shows that they are still paying attention at the mixing board. This season is no different, with an excellent 5.1 DTS-HD MA track that rocks you to your core during the action and softens back into the background for the core dialog scenes. it's fairly typical like the video is, but that doesn't mean the audio is any less impressive. Great bass response during battles and slow motion shots, and overall great surround activity with lots of commotion during the clone battles. Thumbs up all around

Even though The Flash has descended in enjoyment factor, it is still the most watch The CW DC show out there at the moment, and continues to pull in the ratings. As long as that continues we’ll have more Flash, but I’m worried that we might only get one or two more years before the show just implodes in on itself. The Blu-ray is just as good as previous Warner TV shows, and is a great watch for the tech specs alone. As for the show, this is at the rental stage for me, or watch it on streaming when it gets released.

I gave up midway through season 4. I made it to season 5 of Arrow before bailing on that show. I wish they would go for less episodes with better writing, but that's just me.
You must log in or register to reply here.
Share:
Facebook Twitter Reddit Pinterest Tumblr WhatsApp Email Link