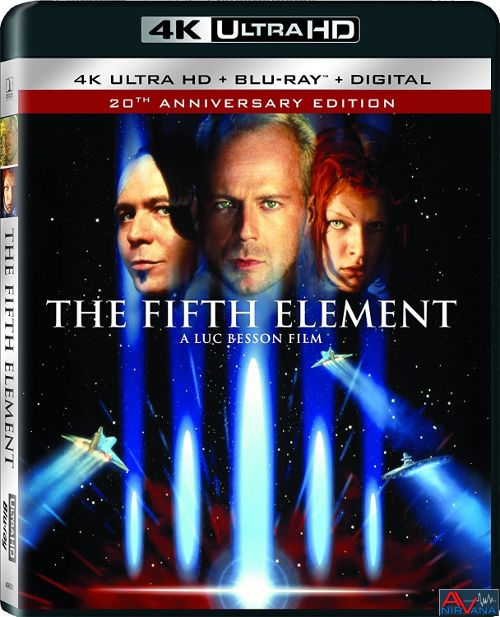 There are some movies get released and re-released on home video umpteen times. Films like Star Wars, Terminator 2, 300 etc. etc. etc. ad nauseum. Luc Besson’s The Fifth Element is another one of those movies that just seems to be released and then rereleased a few years later over and over again, until the end of time. I’ve personally owned the DVD, the Superbit DVD, the original 2006 Blu-ray (which was pretty crummy, the Remastered Blu-ray, the new special edition from 2015 with a 4K master being struck, and now this 4K UHD discs as well (as you can tell I kind of like the movie). No matter how many times I’ve watched Luc Besson’s magnus opus I still have this big sloppy grin all over my face, just soaking in the bizarre sci-fi cult classic.

You almost don’t need to say anything about The Fifth Element, it’s that widely known and, usually, treasured. The film was a moderate success back in 1997, but it has gained cult status on home video, rivaling some of the greatest sci-fi movies made for love and adoration. Besson’s film is a slightly bizarre, but extremely unique and utilizes an incredible ability to stick you right into the middle of a complex world without having a ton of backstory or making the audience feel lost in the universe (something Star Wars: The Force Awakens couldn’t do with 6 previous films already made). However, there are a few people that don’t know WHAT the insanity is about so I will summarize.

The Fifth Element is the lifelong dream and masterpiece of one Luc Besson. His classic hero comes in the form of Korben Dallas (Bruce Willis), a down and out ex-military retiree who’s living life as a cab driver. His life turns upside when a beautiful young woman drops into the hood of his cab and brings him into a world of adventure and good vs. evil. It seems that this young woman, Leeloo (Milla Jovovich), is what is known as the Fifth Element, a being whose primary purpose is to fight evil. Specifically, an evil that arises once every 5,000 years and comes to devour all life through a wormhole. Well, this wormhole has just opened up and a mysterious force is on its way towards us, and only Korben Dallas, Leeloo, a priest named Father Vito (Ian Holm) and shock jock who just WON’T shut up named Ruby Rhod (Chris Tucker) can save the galaxy from utter destruction. In their way is one Mr. Zorg (Gary Oldman), a malevolent human who wants to use the elements of destruction to bring in the ultimate evil, AND make a few bucks selling weapons on the side.

The Fifth Element is one of those epic science fiction action adventures that just stands the test of time. 20 years after its initial release, the film is one of the most watched sci-fi movies of all time. It’s been released over 9 times on home video, and finally makes its way to 4K UHD. I don’t care WHO you are, but the zaniness of Besson’s vision, mixed with some amazing action sequences combined with some sly tongue in cheek make for one entertaining film, even if the film is over 20 years old.

Now, I’m always slightly hesitant with catalog titles coming to 4K UHD. They’ve been a little bit hit or miss, especially when learning to incorporate the freshness of HDR, as well as utilizing subpar masters for their discs. HOWEVER, Sony had just restored the film back in 2015 with a new 4K master and the Blu-ray that was released (that same Blu-ray is included in the combo pack as well by the way) was a stunner that surpassed all previous Blu-ray iterations (the first 2006 Blu-ray was VERY sub par, and the resulting remastered edition a few years later was excellent, but nowhere near as good as the mastered in 4K release in 2015). That same master is used for the 4K UHD and it is well worth the wait.

I thought that the 2015 Blu-ray was really about as good as The Fifth Element was going to get. The Blu-ray was a perfect 5/5 and looks amazing on both my 4K TV as well as my projector equally. So color me surprised when the 4K UHD disc looks substantially better. A/Bing the 2 discs shows off some incredible detail improvement across the board, but it’s the HDR where the disc really shines. The bizarre and vibrant colors that the film are known for just pop off the screen and look about as lifelike as you can possibly get. Shot using Super 35, The Fifth Element in 4K enjoys a very healthy grain structure, that is devoid of noise, aliasing or any digital banding that I could see, even under scrutiny. Black levels are deep an inky as the ultimate evil hurtles towards earth, and even the dusky scenes (which are always the most problematic) show no signs of digital anomalies. A stunning 4K upgrade that is very much deserving of the format, and easily one of the best looking catalog titles I’ve seen to date.

The Dolby Atmos track from the 2015 disc is ported directly over on to the 4K UHD disc, but that’s not a downside as Atmos is kind of the tippy top of the top right now, and the track was nothing short of incredible. The same analysis as I had back then applies today, as the track is extremely nuanced and one of the better Atmos mixes that I’ve heard. The action is hard hitting and makes for an extremely exciting sonic experience, with hard hitting bass that isn’t over bloated (it has just the right amount of vibration to explosion, and then accentuates the rest of the mix with subtle uses of low end to amp up ships, cars and weapons fire), and great use of surrounds. The overheads are utilized judiciously, adding in discrete overhead ambient noises during the famous cab crash, as well as during the end battle on Korben’s ill fated “vacation”.

The Blu-ray releases of The Fifth Element have been kind of rocky over the years, but I was actually very satisfied with the 2015 Blu-ray release, but the dropping of the 4K UHD disc is MORE than worth double dipping. It included the stunning Atmos upgrade that was unique to the 2015 remastering, but also makes a substantial improvement on the video front. While there is only one NEW extra on the set, I still give this a hearty recommendation for the uptick in video quality alone as it is more than just a small upgrade. Still one of my favorite films, and a great looking/sounding 4K UHD for Sony. Highly recommended.
.

Well after reading your review Mike I'm gonna have to add this to the collection. I'm not sure which version I have but I don't think it's the 2015 version and I don't remember being all that impressed by the video quality.

the 2015 version had Atmos, so that's the indicator there. but the original Blu-ray from way back was REALLY poor.. a newer version fixed that, but still this one easily beats all of them

Yeah, just looked and my copy is from 2007 and has a Dolby TrueHD track. It's been a long time since I've watched it so definitely picking it up. Thanks for the review Mike!

ok, the 2007 version was the fixed remastered one from the HORRIBLE 2006 version... it was replaced by the 2015 version (which is the master for this 4K disc as well as being included in there as the Blu-ray half of the combo pack)

Ok, thanks for the info. So yeah I'm still double dipping but I get Atmos and 4K. Well worth the investment me thinks.

This has always been regarded as a "go to" disc for a great video experience. Looks like Sony intends to keep it that way! 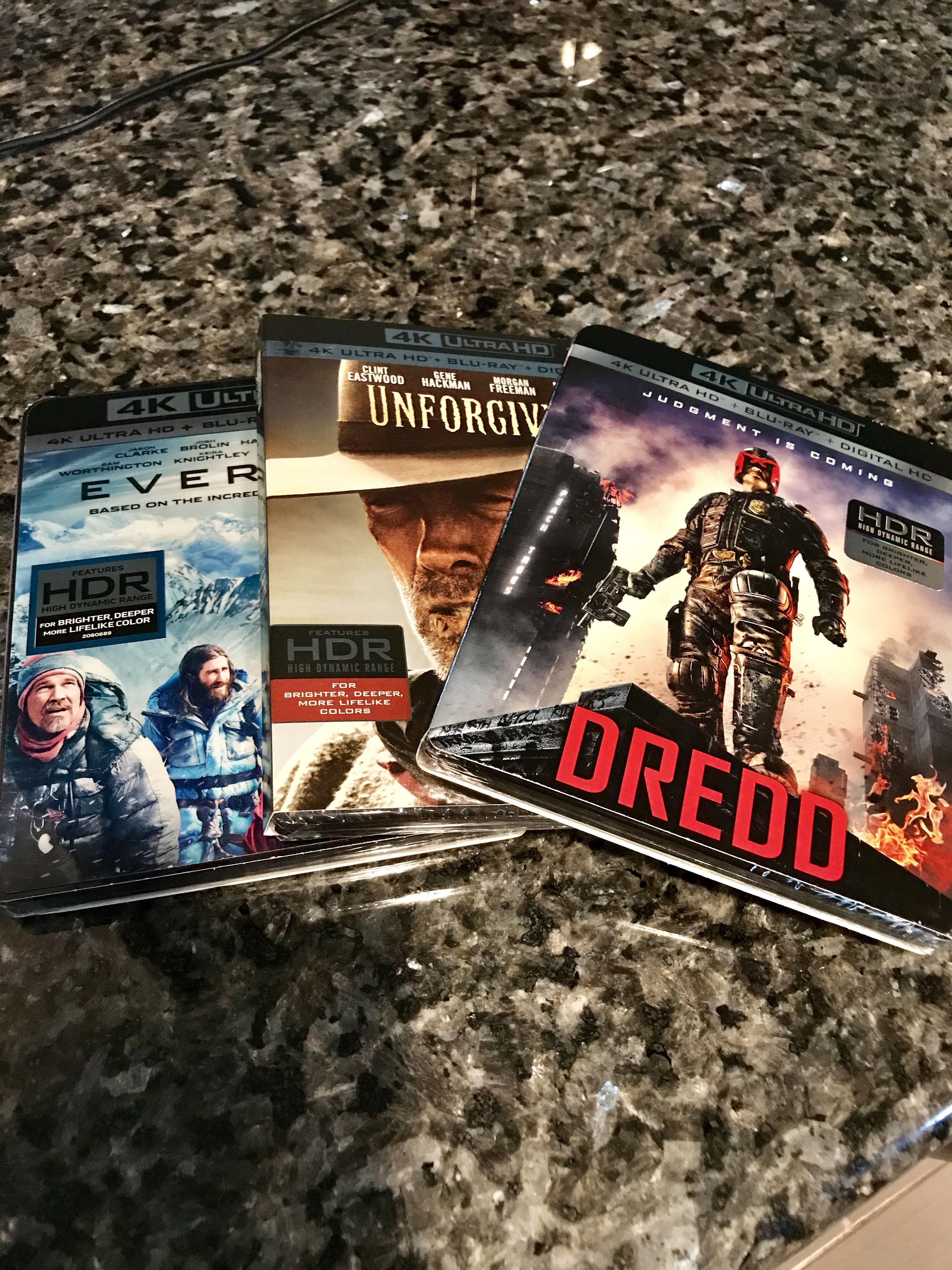 Sadly my local BestBuy didn't have any copies. Picked up a few consolation prizes though.
Last edited: Jul 7, 2017

I bought the 2015 for the Atmos... and now this??? The movie industry really knows how to rip our wallets into shreds!

Tell me about it. I just purchased the Blu-ray for Atmos in March.... now they come out with this one.

Well I think since you did the review and rubbed it in our faces, you should be the one to purchase us a 4k copy... and I'll mail you my BD to sell if you want it. Great idea huh Todd?

Ima just going to stick with my Superbit edition... for now.

This is a no-brainer. I've always loved this movie and have bought every edition of this movie...

Kind of stings a little that I did buy the last iteration, but oh well...

I know the feeling. I hate to say I've spent the money and owned every iteration of the film on home video except for the VHS ...
T

I picked up the steelbook version from BB and watched it last night. Very impressed on all fronts and I was particularly surprised by how well the video was for such an old movie. A must have for the library.

I got my copy and watched it over the weekend. I must say, I am slightly underwhelmed. I agree this is the best that the film has ever looked, but in this day and age, the baked-in edge enhancement just is becoming more glaring. It was prominent with each iteration of the movie thus far, but it just becomes that much more apparent in 4K. If I recall correctly, it was done at the source when they were doing the CG so nothing can really be done to it. I don't think there's a way to get rid of it without scrubbing natural detail at the same time, just limits it from looking great.

The HDR also, was not as "Wow" inducing as I was hoping. Still good and no question it still improved the overall image, but especially in the highlights department, not quite as impressive as some recent catalog releases I've seen. Still, the black level in this movie is without a doubt the biggest improvement that I saw throughout. Colors also looked consistently better to my eyes.

Don't get me wrong, these are just gripes that qualify my "slightly underwhelmed" statement. I am still very satisfied with the upgrade, even though I have the 2015 blu-ray release, as well.

yeah, the Edge Enhancement is something that would take a ground up re-doing and be a multi million dollar re do of all the special effects to get it out, and I don't ever see that happening short of a studio exec head who comes in and it happens to be his favorite film .It's one of those small things we've had to live with ever since the VHS

Thanks for the review. Never saw this movie.. Will check it out.
T

well after this review and raving review from a co-worker I picked up a copy with no regrets. They really did an outstanding job with this release.