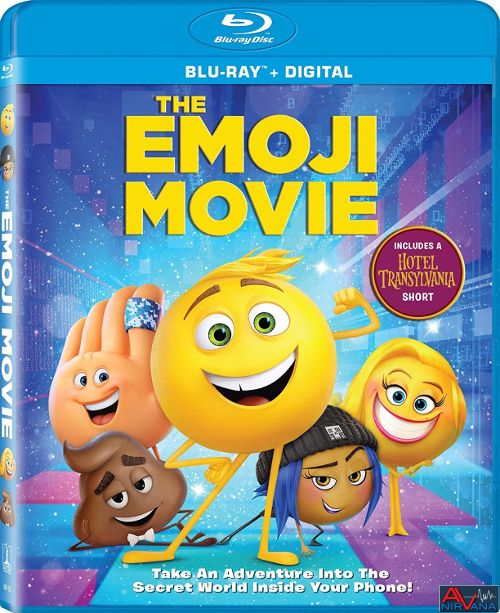 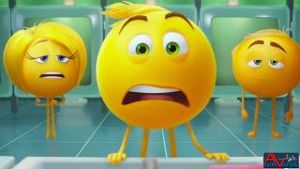 Movie
Do you ever wonder WHY certain movies get made? For example, many of us barely saw the logic in Adam Sandler’s Pixels a few years back, and when it came to our attention that Sony was in development of Tetris: The Movie and The Emoji Movie many of us thought they had lost their minds. It just seems like scraping the bottom of the barrel and looking through the leaky dregs for a SEMBLANCE of something new and exciting to put on screen. While Pixels was mildly livable, The Emoji Movie had me staring at the screen wondering if the executive who greenlit the production was fired at this point. Sadly, it seems that the dull, uninspiring animated kids flick will probably act as a green light for more of these productions, as the film somehow made $204 million off of a $50 million budget.

Life in the world of emojis is just grand. Each little emoji has their own little personality to adhere to, with smiling emojis forced to smile all day long, sad faces are sad, and the poop emoji is…..well….poop. It’s a harmonious little world without any problems living inside of a phone, until we meet Gene (T.J. Miller, the comedy equivalent of cancer), a little “meh” emoji who just wants to go out to the home screen and live as a working emoji. When his parents Mary Meh (Jennifer Coolidge) and Mel Meh (Steven Wright) agree to let him go and try it out, everything goes haywire. Gene panics in the middle of being chosen as the emoji for his owner, Alex, to use and can’t pull his “meh” face off. This leaves the powers that be, including Ms. Smiler (Maya Rudolph) VERY displeased, and soon Gene is labeled a malfunction and summarily programmed to be deleted by the malware bots.

Not exactly happy about being deleted, Gene is rescued by his disgruntled buddy Hi-5 (James Corden), who offers to help him out by getting him over to the piracy app where a hacker by the name of Jailbreak (Anna Faris) can reprogram him to whatever he wants, and thus can come back to his own little emoji app. The problem is, Smiler is not about to let this happen and her malware bots are on a mission to eradicate the rogue emoji before he can complete his mission. The only avenue awarded to the three programs are to get to the dropbox folder where they can escape the phone by getting transmitted to the cloud and can reset themselves using the source code. 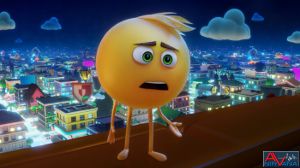 I guess ever since Toy Story became an international success it seems that EVERY studio is desperately trying their hardest to make their own box office animated hits. It used to be fairly clever, but we all know that when you’re scraping the barrel to get films about emojis, or Tetris, or bubblegum characters (yes that’s in the works too) then you’ve hit creative rock bottom. That’s really the problem here with The Emoji Movie as its not that bad otherwise. There’s nothing technically wrong with the movie, or the animation, other than the fact that it’s a tired and well worn cookie cutter film that has heroes trying to be themselves, and fighting for their own independence. If you think about it, the movie is really just a clone of Wreck-it-Ralph, just without the heart, soul, and intelligence of the Disney film.

You can tell that the actors are having a blast with the characters they’re given, with performances by Anna Faris, Maya Rudolph, Patrick Stewart as the poo emoji (I had a chuckle at that), Christina Aguilera, Sofia Vergara, Sean Hayes, Rachel Ray and countless other celebrities just hamming it up. They’re sadly let down by the very mediocre script that just uses the film’s colorful characters to blast them through a kaleidoscope of different colorful acts and toss in some pop songs along the way. Something that leaves the film feeling nothing more than a desperate cash grab by all involved. However, as much as I felt the movie was decidedly sup par, Sony hedged their bets wisely by using a limited $50 million budget and came out WAY in the black by grossing over $204 million worldwide.

The Emoji Movie comes to Blu-ray with a very pleasant looking 2.39:1 AVC encoded disc that does well with the digital material. For a big budget film it’s actually THAT detailed in its animation style. The emojis are well detailed, and show good clarity in the digital picture, but there’s not a WHOLE LOT of detail to go around. The animation design seems to be fairly simplistic by nature, but the picture is very brightly colored, with every yellow, blue, green and neon color from the emoji handbook thrown into the pile (which is expanded upon once Gene and Hi-5 leave and go visit other apps). Black levels are deep and inky, with almost no signs of any digital artifacting except some mild softness to the film. Overall it’s a very competent and nice looking encode for the Blu-ray format.

The 5.1 DTS-HD MA track of the Blu-ray (the Atmos track is reserved for the 4K UHD disc) is just as pleasant as the video encode is, and while it’s not a show stopper, or demo track, the 5.1 experience is more than capable of handling the child like animation action with ease. The mix is rather forward heavy and dialog heavy for a goodly portion of the film, but the music sequences (including the big dance off) really gets all 6 speakers hopping and the LFE hits hard and fairly deep. Surrounds get used a decent amount of the time with all sorts of beeps, bleeps and other phone related background chirps to liven up the front heavy portions, and while the LFE is constantly engaged, when it DOES come out to play, the bass never disappoints. Vocals are crisp and well defined, with an even balance among the rest of the action.

There’s a difference between being so ineptly done and painfully bad that you’re a horrible movie, and just being done without any enthusiasm or cleverness at all. Which in turn leads to a very bad viewing experience. The Emoji Movie is the latter. A movie that really had no business being made, and wreaks of desperation to find a new source for an animated kids flick (a Tetris movie coming up? Really?) more than anything. Everyone seems to be enjoying themselves and having fun behind the mic, but the “paint by the numbers” script leaves the 86 minute film really feeling way too long by the time the end credits start rolling. It’s a harmless little kids animated flick that shouldn’t really offend any sensibilities, but I wouldn’t use it for more than an hour and 15 minutes (without credits) babysitter rather than the next animated classic.