The Devil Rides Out - Blu-ray Review

The Devil Rides Out 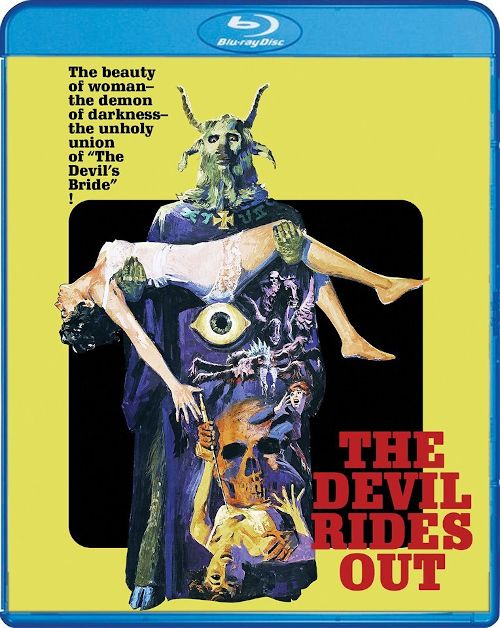 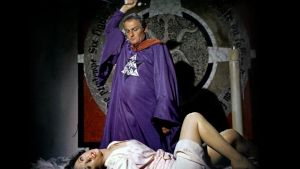 Movie
Scream Factory is digging deeper into their back catalogs, delivering on that promise to give us more Hammer Horror films that they’ve been doling out over the last year, with another little fun gem. Originally titled The Devil’s Bride, The Devil Rides Out is another little flick where the biggest and most scariest villain in movie horror was the devil himself. The 60s and 70s were rife with fear of music being Satan’s tool, or Satan worshipers stealing your soul away from good Christian parents, and while it’s true that he is the ultimate evil to believers in , it was translated as the pop culture cinema villain as well. Complete with supernatural powers and Satanists stealing souls, Hammer Horror and other studios decided to jump on that band wagon and hammer it home as only they can.

When the Duc de Richleau (Christopher Lee) and his friend Rex (Leon Greene) arrive unannounced on the Duc’s protege Simon Aron (Patrick Mower) they find him accompanied by guests. However, not just any guests, but members of a satanic cult presided over by the great Mocata (Charles Gray). You see, Simon has gotten himself in too deep with the cult and is being baptized into Satan’s service that very night. Realizing that there is no time to lose, Duc de Richleau knocks Simon unconscious and drags his friend away in hopes of getting him out of the clutches of Mocata.

Unfortunately Simon’s torture is not over. Mocata is bound and determined to have Simon back into his clutches and uses all of his power to get ahold of the young man once more, pulling him back into his baptism. With the help of the Duc and Rex, they are able to sway Simon’s point of view, as well as another young initiate named Tanith (Nike Arrighi) who just so happens to be Mocata’s new medium. Now more than ever the evil head of the cult is determined to have his prizes back, and it will take the strength of every one involved to keep his demonic claws off of his prey. 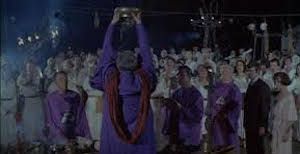 The Devil Rides Out is a fantastically hammy film that fits right in with the rest of the Hammer Horror library. Christopher Lee was always a staple of the Dracula films in their repertoire, but he’s much more engaged and excited as his role of Duke than he is reprising the melodramatic vampire roles that he got so very tired of doing. While some of the scares and supernatural “powers” may seem a bit hokey to us today, they were incredibly frightening and freaky back in the day. The encounter in the salt circle where Mocata is trying to gain control was an awesome scene, and even with the bad (for this day and age) superimposition of the spider as larger than life, hits home quite well.

This is one of Hammer’s better supernatural films, providing all of the charm and slightly over the top thrills you’ve come to expect from them, as well as a moody English setting. The mansions and locations are not nearly so Gothic and Baroque as we’ve seen in the past, but the more “modern” and fitting in with French and English countrysides, which does wonders for making the whole thing seem more aristocratic and posh in one of their more modern attempts at horror.

Scream Factory is boasting a new 2K master for The Devil Rides Out, but also includes the European Studio Canal master (titled The Devil’s Bride overseas) that was released a few years ago as well. Comparing both directly against each other I would say that the new 2K master from Scream is definitely the one to go with. The Studio Canal release is way too yellow, and the brightness and contrast have been boosted pretty heavily, blowing out the night scenes a bit much. The new 2K remaster is very clean and clear, with a nice layer of 1960s era grain throughout the whole thing. There’s some minor speckles and an occasional vertical line that pops up every once in a while, but the encode otherwise looks pristine. Details are astounding, allowing you to see the peach fuzz on Tanith’s face, or the bright orangey reds of the Duc’s palatial estate rugs. Blacks are strong and deep without being washed out, and the overall colors and brightness looks so much more natural. Easily one of the best hammer horror discs Scream has put out.

The film comes with it’s original 2.0 Mono track in lossless DTS-HD MA, and it sounds quite nice for what it is. Dialog is almost always perfectly intelligible, and the ambiance for the cult with the score is quite appealing. There’s nothing really wrong with it, but we do hear the occasional pop or crackle when a scene change happens (only happened a couple of time). The track is solid enough, but a teensy bit thing and the score a bit lower in the volume than the rest of the track. Simple, effective, but a product of it’s time in terms of what it can accomplish.

The Devil Rides Out is a fun bit of hammer horror history, and one where we finally get to see Christopher Lee outside of his Count Dracula visage. He’s having a grand old time in this outing, and the movie itself is quite a lot of fun. It never takes itself TOO seriously, but still has so much fun with the other the top melodrama of the Satanic cult they’re fighting. Scream Factory has done a bang up job with the new 2K remaster, and even has included the Studio Canal encode as well (although I really like the new master way better), as well as a solid DTS-HD MA 2.0 track to enjoy. The extras are off the charts and nearly a perfect 5 on my scale, making this one of their better releases along with The Reptile for Scream Factory Hammer sets. Definitely a fun watch.