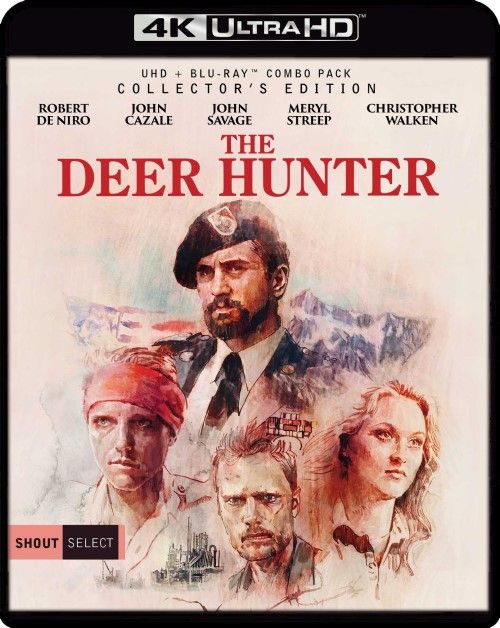 Movie
Shout Factory has pumped out about a dozen (ish) 4K UHD titles to date, but so far they’ve all been those IMAX documentaries that work as great background titles at a party. So far they (along with most other boutique studios) haven’t dropped a 4K UHD title for a feature film, that is until The Deer Hunter press release came across my email. Needless to say I was rather excited. The Deer Hunter is a great classic, but I was also slightly nervous as it was a very grain intensive film with distinct optics used in the cinematography that didn’t lend itself towards super glossy material that tends to be the draw of 4K UHD to most people (not saying that’s correct, just stating that it is the draw for many). With that being said, I have to say that Shout Factory did an impressive job, using a Universal provided master, and gave it a very nice looking encode that should please fans of the film’s troubled visual look.

The Deer Hunter is an emotional tour de force. A film from the late director Michael Cimino, that is probably his crowning achievement, and sadly, his last critically acclaimed film before he tanked his career in Hollywood. I almost have to give SOME back story to this in order to explain the discursive storytelling of The Deer Hunter, and to explain why I say it was his last good film. Michael Cimino gained his claim to fame with the Clint Eastwood thriller Thunderbolt & Lightfoot, and was then able to pitch the idea of The Deer Hunter to Universal. Well, this would be his crowning achievement, despite the production being LITTERED with nightmarish interactions, backstabbings, and burnt bridges. Cimino famously tried to steal the script from writer Deric Washburn, and publicly claim he was a Green Beret Medic to the news, and became a veritable thorn in Universal’s side throughout the production. However, the film was met with RAVE reviews by critics everywhere as the depressing and heart wrenching tale of PTSD ridden Vietnam vets was so visceral and palpable for a generation who had JUST seen the war end 3 years earlier. While Cimino did get a lot of flak from a few critics for his insensitivity in putting out a Vietnam war movie before wounds were allowed to heal at home, it turned heads for everyone else and was lauded praise.

Sadly Cimino would literally tank his career (and cause the demise of UA studios as well) with his next film, Gates of Heaven, which was almost 5x it’s original budget, and was subsequently MURDERED by critics when it came out. Ironically that film is not considered one of the top 100 films of all time, and sort of given Cimino some of his glory back, even though his career in Hollywood nosedived after he was blacklisted due to the debacle.

All that to say, The Deer Hunter is a work of a madman genius director, who was insanely nitpicky about what he put in the film, and was a total nightmare to deal with on the studio side. The film is hard to describe in summary simply due to the fact that it’s a journey, not a destination, if you know what I mean. The story revolves around a group of men who are just coming to biggest crossroads of their lives. Michael (Robert De Niro), Nick (Christopher Walken), Steven (John Savage) are all about to go to War in a few weeks, and it’s their last time together as normal people. Steve gets married just before deploying, and Michael is wondering what he’s doing. However, those little worries become moot when the trio are shipped off and have to deal with the sheer horror that is jungle warfare. The three are captured by the vietcong and tortured by being forced to play games of Russian roulette, watching their brothers killed off in front of them. The three are able to escape thanks to some quick thinking by Michael, but even though they’re back home the three men aren’t truly free. Michael goes back to his home town in Pennsylvania where he reconnects with old flame Linda (a baby faced Meryl Streep), while Steve is confined to a wheelchair. Unfortunately Nick went AWOL in Saigon, and none of the other guys know where he is, until Michael gets a whiff of him through some mysterious money that Steve keeps receiving every month.

The Deer Hunter is an emotional wrecking ball. I don’t say this lightly, but it rips at your heart and soul watching this movie. It’s not easy task to sit through it all, but it’s so raw and visceral that you can’t help but be enthralled. Cimino was emphatic about having his actors improvise their lines, so that probably adds some to the realism and rawness of it all, as the characters seem so intense and REAL, rather than scripted. However, the discursive nature of Cimino’s directing style also means that the movie sometimes feels like it doesn’t have a central purpose. I remember watching the movie some 20 years ago and not really understanding it, believing that there WAS no real point to the narrative. However that is the furthest thing from the truth. The story is about men dealing with what we now know as PTSD. Being damaged, torn apart and left as shell of their former selves as the cruelties of the world strip the innocence of youth. It’s beautiful, heartbreaking, and slightly oddly paced, but still a very good film some 42 years later.

Rated R By the MPAA

This being Shout Factory’s first feature film in 4K UHD I was very curious how this would turn out. Especially since they chose a film that incorporates heavy film grain and 1970s optics effects as well, which is not conducive to razor sharp clarity or glossy digital imagery. I wasn’t given any information from Shout Factory on what master was used, so I’m assuming it’s not a brand new 4K scan for this release, but probably one that Universal has had done over the last decade (or at least since the Universal 100th Anniversary Edition that came out in 2012), so I can’t confirm if it’s using a 4K or 2K digital intermediate. That being said, the 4K UHD disc looks very good. As I mentioned above, the imagery of the film doesn’t lend itself towards shiny and glossy, and the HDR for this disc is applied appropriately, but never garishly. Looking at the Blu-ray in this combo set (I don’t have the Universal disc for comparison as it was damaged a few years back) you can tell that the color has been dimmed some, which leaves the outdoor shots looking a bit less bright than I remembered. However, the Blu-ray’s outdoor shots have an overabundance of red saturation and looks overly brightened as a result. While I kind of liked the daylight shots in the Blu-ray better in SOME ways (or more accurately wished that the daylight scenes in the 4K UHD disc were boosted a bit in the brightness department), I will say that the black levels and the very dim sequences that play out in the film are MUCH better in the 4K disc. The 4K is able to handle the complexity of the darkness, showing shadow detail and a lack of black crush that is startling in comparison to the Blu-ray. The highlights and HDR application in those dark levels is superb, with grain and details coming through naturally, instead of being a smeared mess at times. It may not be a PERFECT 4K UHD due to the visual style of the cinematography, but it is a definite improvement over the Blu-ray.

The 5.1 DTS-HD MA tracks seems to be the same mix as the one on the Universal Blu-ray, and as such it’s definitely a solid contender. The film is very quiet at times, but then gets punctuated by the sharp sound of a rifle being fired in the mountain, or the roaring and bellowing of Saigon. Vocals are generally clear, but I always noticed that there is some harshness on the high end of the track, especially when voices get raised. Also sometimes vocals can be lost in the hubbub and yelling, such as in the underground gambling den near the end. Bass is punchy and direct, with a goodly amount in the midrange, but very little in the sub 20hz range (which was typical of 1970s films). All in all, a good track that still holds up today.

Shout Factory pulled a doozy of a film for their first foray into 4K UHD feature films, and a challenging one (visually) at that. Their release is well done though, making an already great looking film even better, despite some of the visual hurdles it had to overcome. The new extras on the disc are very welcome as well, and it really brings a tear to my eye to realize that this was the last great film from Michael Cimino that we’d see (Heaven’s Gate being ridiculously controversial) due to his sudden fall from grace after The Deer Hunter was completed. Great Buy in my humble opinion.

Nice review. This is a definite purchase for me as it’s my genre. Just gonna wait till the price strikes right.

There are a handful of these AFI Top 100 films that for whatever reason I haven't seen, and this is one of them. I'll definitely be watching this one.