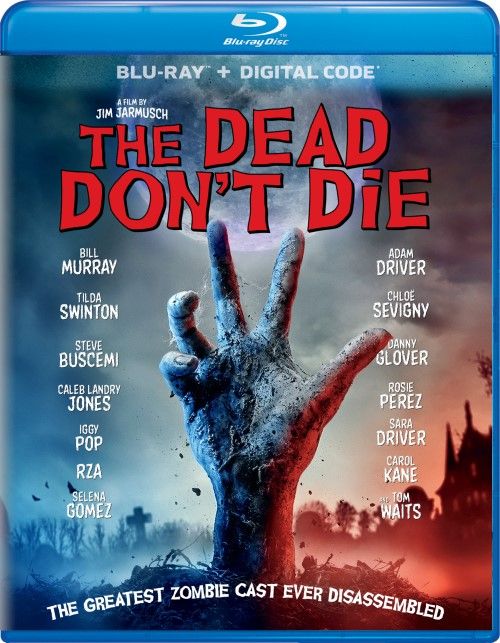 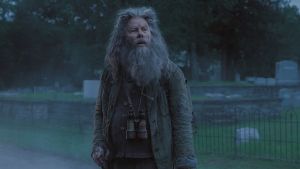 Movie
Jim Jarmusch is a director/writer with whom I’ve become intimately familiar with ever since his indie hit (also starring Adam Driver) Paterson a few years ago, and I’ve become a rather avid fan of his work. he’s usually VERY much an indie director with low level budgets and high concept art pieces, so I was naturally really intrigued to see what he could do with a large budgeted film (comparatively) and an all star Hollywood cast (the film is literally chock full of recognizable names) in a zombie comedy. The trailer made the film out to be a bit more like Shaun of the Dead meets George Romero’s work and splashes of The Coen Brothers dry humor for good measure. Well, after watching I’d have to leave out Shaun of the Dead (the humor is much more droll than Edgar Wright’s works), and put it solidly in the Coen Brothers meets Dawn of the Dead category. The film is laugh out loud funny at times, and has a fantastic first half, but Jarmusch has a hard time with the second half of the movie, leading to a rather weak finish.

Much like Romero’s works, The Dead Don’t Die starts out in a small little town in Western Pennsylvania called Centerville. The story starts out simply enough, with a couple of cops (played by Bill Murray and Adam Driver) noticing that it’s still daylight at 8:00 pm on a weekday. However, as Adam Driver’s officer Ronnie Peterson says throughout the film, “this is going to end badly”. Fracking in the North Pole has officially thrown the earth off it’s axis ever so slightly, and strange things have been going on lately. Animals have been acting spookish, the days are no longer the same, and a sort of cosmic radiation has been spilled out onto the earth with unforseen consequences.

Yup, that radiation pretty much does what one would expect it to. It animates the dead, who begin munching on the poor people of Centerville. Ronnie and Sheriff Cliff Robertson (Bill Murray) are first on the scene, where young Ronnie instantly jumps to the theory of zombies. However ludicrous that might seem to the townsfolk, Ronnie may be right. The dead have risen around Centerville (and most likely the world) and his little premonition (which gets a hilarious twist in the last act) turns out to be spot on. While most people are getting munched and turned into the undead, the survivors of the midwest town are trying their best to keep from getting eaten. This includes a Scottish accent speaking mortician named Zelda (Tilda Swinton) who puts her samurai sword skills to the test (don’t ask, just be warned that she steals every scene that she’s in), a racist old farmer (Steve Buscemi), a bunch of yuppie college students (with Selena Gomez at the helm of that group) and various others hack, slash, and generally slaughter zombies to make it through the night. 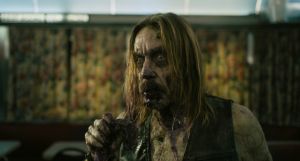 The Dead Don’t Die is a rather self aware film. Jim Jarmusch cheekily pokes fun at popular culture, having the zombies actually addicted to the same vices and habits that they were slaves to in life. Phones, coffee, fashion etc. They all play into the winking and nodding at the cameras that goes on in the hour and forty + minute film. This is amplified in the third act where it’s revealed that Ronnie has actually read the “script” from Jim, and actually knows what is going on the whole time (which is where his near prescient knowledge of how things were going to turn out comes from)! However, even Ronnie doesn’t know about the third act twist which turns the whole film on it’s ear, ending in a completely ludicrous ending that has some of Edgar Wright’s zaniness to it after all.

If anything, the film lives and dies by its characters. The first act is well written and directed, but director/writer Jim Jarmusch loses focus by the end of the first act, and when the movie devolves into typical zombie killing time it slows down dramatically. It’s almost as if Jim has a hard time actually coalescing all of his ideas into a simple and workable ending, just letting it fizzle out with an end twist that is both hilarious and puzzlingly bland at the same time. The characters though. That’s a different story. The HUGE cast of well known actors and actresses are each given their own little idiosyncrasies, and they just revel and roll around the lunacy that unfolds on screen. Billy Murray is back to comedic form here, and Adam Driver proves once again that he has a keen eye for wry humor. Steve Buscemi is wonderful as the racist redneck farmer, but it’s really Tilda Swinton who steals the show with every scene she’s in. She exudes a sense of cheeky humor that is just infectious, and her straight forward and seemingly lackadaisical approach to everything (along with her penchant for chopping off zombies heads with a samurai sword) had me in stitches every time she showed up.

Rated R for zombie violence/gore, and for language 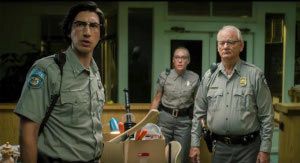 The Dead Don’t Die was ripe for a 4K UHD release due to using 4.5K and 3.4K digital cameras and rendered at a 4K resolution master, but sadly Universal decided to release the movie on Blu-ray only (most likely due to the budget constraints and low box office appeal of the film). However, the Blu-ray that we do get is nothing to laugh about, as it is a technically well done film that stands out aside from it’s budget constraints. The image is defined well, with strong detail levels and a very organic look to it. The movie is never overly spectacular looking, being shrouded in a heavy blue color grading, with splashes of more neutral colors here and there (such as the opening scene out in the forest). There are dabs of bright primary colors dotting the grim and blue/gray landscape, but the shadows and the darkness tend to swallow up most everything else. Black levels are deep and inky, showing off tons of good shadow detail, but there are a few instance of black crush that randomly pop up here and there. 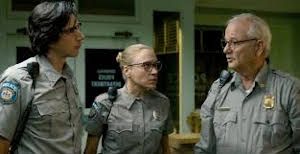 The 5.1 DTS-HD MA track that Universal has bestowed upon The Dead Don’t Die is more than capable as well. It provides a wide sound stage that makes high usage of the surrounding elements to give the film a very creepy and immersive feeling. Groans and creaks come from all angles, as does forest elements and background noises throughout the movie. Gunshots ring out with solid depth, and the whole chaotic nature of the movie makes for a really 3 dimensional tone. Dialog is crisp and clear as ever, while surrounds and LFE blend in seamlessly even though they never are wildly aggressive. It’s really the nuances and the little auditory cues that make this track fantastic, rather than being an overbearing action track.

The Dead Don’t Die is a heartily funny film with wit, dry humor and a distinctly George Romeroish vibe to it that feels more like early Romero rather than his latest abominations. Adam Driver, Bill Murray and Tilda Swinton actively dominate the scenes they’re in, and Jim Jarmusch’s first attempt at a mainstream film ends up with rather positive results. He DOES lose his focus just a little bit in the final act, but the first act is still downright hilarious, and the action packed second half does a good job of smoothing over the faux pas’s that Jarmusch makes with the ending. The audio and video are simply stunning though, but once again the extra are more than a bit lackluster, ending the night off with this reviewer recommending it as a fun watch with some caveats.