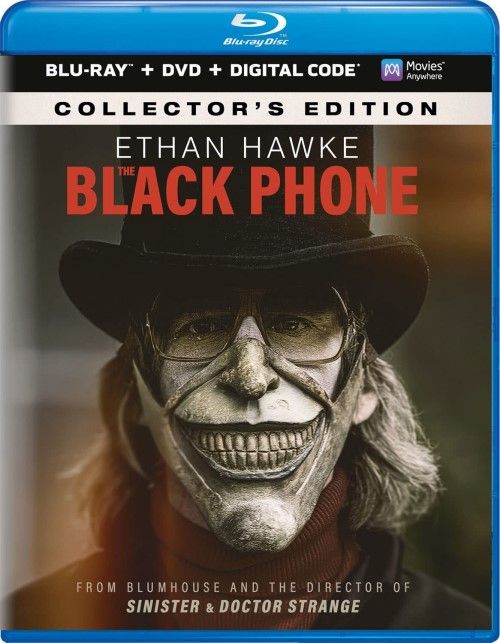 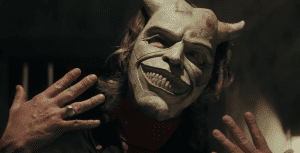 Movie
It’s been a while, but Scott Derrickson is back doing an original horror movie once more after reuniting with C. Robert Cargill and Ethan Hawke once more for what turned out to be one of this summer’s most profitable enterprises (Maverick not withstanding). I initially really wanted to go see this in theaters but life got in the way and suddenly I was getting notifications that it was coming to Blu-ray this month (sadly no 4K UHD). So instead of seeing it at the cheap theaters I eagerly awaited the home video release from Universal and popped it in the player tonight.

The story is a bit sparser than I wanted, and the ending was just “ok” (the last few minutes that is, not the confrontation between Finney and the Grabber), but Ethan Hawke absolutely DOMINATED as the evil villain here, with Mason Thames following up with an intensely realistic performance. The gist of the story is that we’re back in 1970s America where a mysterious person is kidnapping kids off the street. Finney (Mason Thomas) and his sister Gwen (Madeleine McGraw) are watching people they know simply vanish out of thin air, with nary a clue from the local police. While it may seem like they’re lucky to be passed over, both Finney and Gwen are suffering at the hands of their violent drunken father Terrence (Jeremy Davies as a loathsome character here) who is getting lost in the bottle after losing his wife to suicide.

The only thing is, they’re not so “lucky” for long, as Finney vanishes off the street due to the mysterious man in face paint that the police are after. One of the reason’s that Gwen is so abused by her father is that she (and her mother) had the gift to see things in their dreams. One of the reasons her mother committed suicide (and why Terrence blames it for her death), allowing her to see glimpses of the young kidnapped boys. Desperate to find her brother before it’s too late, Gwen begs for her gift to be used for good instead of random happenstance, and sets out to rescue her brother before he ends up underground.

The story for The Black Phone is not THAT impressive. I mean, it’s a decent script but you can see some of the beats coming a mile away. The whole black phone that talks to Finney with the ghosts of the dead boys, the inevitability of the Grabber (Ethan Hawke) getting his comeuppance, and even Gwen’s psychic visions. That being said, the film really really thrives off of mood and atmosphere, which Derrickson provides with aplomb. The mood just SEEPS a sort of twisted and evil energy, with Ethan Hawke playing a huge portion of that as the masked killer (who ironically was modeled after John Wayne Gacey). Ethan simply eats up the film with a glorious hamminess that keesp the film incredibly raw and disturbing. I mean, Jeremy Davies is already disturbing enough as the overly violent father, but Ethan takes it to another level as the very obviously mentally disturbed Grabber.

Not to be outdone, Mason Thomas is absolutely incredible as Finney. He has a sort of raw realism to his performance that sucks the viewer in and makes them believe that he’s really being held hostage. It’s not so over the top that it’s cheesy, but he really exudes that sense of terror and dread and confusion.

Rated R for violence, bloody images, language and some drug use.

The one thing that I WAS disappointed about in the whole package was that we didn’t get a 4K UHD disc. The Blu-ray is excellent though, so fans should not be displeased THAT much. The film is given a heavy sepia over tone to fix the period back in the 1970s, and despite some splashes of bright blacks, or bright colors on clothing and bicycles, this is a fairly monochromatic affair overall. Fine details remain excellent though, and the sepia grading really doesn’t draw any details away from the blacks like it is prone to do with that grading (they can get a bit murky and washed out if the filter is applied too heavily. Overall, this is a very impressive 1080p image, and certainly adds it’s own stylistic sense of ambiance like the audio mix. 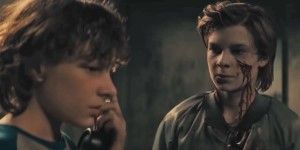 Presented in 7.1 DTS-HD MA, The Black Phone’s audio experience is nothing short of mesmerizing. Much of the mood for the film stems from Mark Korven’s synthesizer based score, as it seeps into literally ever crack and crevice of the sound stage. Dialog is incredibly well done (even with Ethan Hawke’s voice slightly muffled under his masks at times), and the surrounds are pretty much filled non stop with the afore mentioned score. Bass is tight and deep, never overly slamming and heavy, but definitely accentuating the score with some very deep wallops. It can be rather front heavy when underground in the basement or the school, but overall this is a very rich and layered mix that was one of my favorite parts about the whole viewing experience.

As I said above, The Black Phone is not a perfect movie. It’s got some ludicrous plot holes (such as the police taking the word of Gwen without hesitation), but the intensity of the film and the incredibly visceral ambiance more than made up for it in my humble opinion. I personally would have loved to have seen this in 4K UHD as the stream is 4K, but the Blu-ray looks and sounds great, and fans should be very pleased with it, 1080p notwithstanding. Very solid horror watch with a blending of supernatural thriller and period piece mystery. Highly recommended.

Highly recommended it is. I could not wait and bought it on Vudu a couple of weeks ago. Great tension throughout and the sad reality of kidnaps. Thanks for the review.