The Addams Family: With More Mamushka! 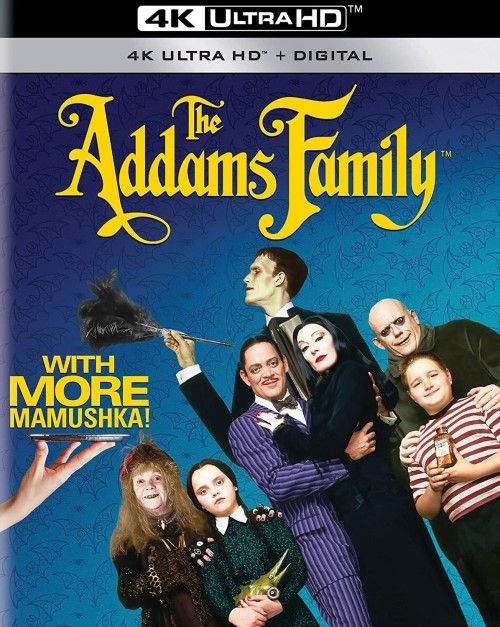 I’m absolutely giddy with glee. Paramount has been doing a bang up job releasing a lot of their old catalog on the Paramount Presents line, but they also have continue to release more remastered 4K titles out there at the same time. Well we finally get the old 90s classic in 4K, AND it appears that Paramount included a remastered Blu-ray in the set as well! Something which they have occasionally left for buyers to get separately such as the case with Days of Thunder or Mission Impossible.

Comics to film adaptations are pretty much commonplace in today’s age, but back in the 1990s it was much less commonplace. Especially when you consider the comic at hand was first started back in 1938, and has become a cult classic to people everywhere. Charles Addam’s “Addams Family” was a wonderfully revered bit of newspaper comic art, but no one ever realized it would be as bit of a hit as it was on cinema some 60 years later. When Addams died in 1988 the only thing that he saw of his creation was the hit television show that ran during the 60s, but ironically the only reason the movie came to fruition was because of the catchy theme song that was still popular at the time. The powers that be decided that it was time for a revamping, having procured the classic stage actor Raul Julia and Anjelica Huston for the lead roles, and thus we get the film here before us, as the rest is history.

The film revolves around the kooky and bizarre “Addams Family”, who live life to the beat of their own drum. Dressed in all black and living in a Gothic mansion, Gomez (Raul Julia) and Morticia (Anjelica Huston) Addams are seen as outcasts by the rest of society. Their daughter Wednesday (Christina Ricci) is reviled at school for her deadpan personality, but the family is happiest just being themselves. Their little routine lives are upended when Raul’s long lost brother Fester (Christopher Lloyd) comes to town and inserts himself into their lives. While Raul is ecstatic to have his brother back after all these decades, The rest of the family is not so sure about Fester and his intentions. There seems to be more than meets the eye and none of them want to see Raul taken advantage of.

The Addams Family was actually director Barry Sonnenfeld’s first feature film (before he would go on to direct the Men in Black series as well Get Shorty and many others), and along with the writers of Beetlejuice and Edward Scissorhands (you can see where the visual style came from) was faced with the difficult task of crafting something that paid homage to the funny papers of Charles Addams, as well as the TV show, but still making something completely their own. In that respect I think they succeeded magnificently, mostly due to the antics of Raul Julia and Anjelica Huston. They both just steel the show in every way, with Raul Julia hamming it up nearly as much as he does for the role of M. Bison in the Van Damme Street Fighter movie. Christina Ricci as young Wednesday Addams is a close tie for second though, rivaling Huston’s deadpan portrayal of Morticia.

Like usual, when Paramount releases a new 4K UHD and a new remastered Blu-ray at the same time, they tend to sell the 4K UHD and the Blu-ray separately, as is the case here. The old Blu-ray from the single and double pack is DEFINITELY aging, so color me surprised that Paramount didn’t just pull out a new master, but a Barry Sonnenfeld approved master as well that he interacted with personally. The results are absolutely stunning, turning the dusty old 1990s classic from a rather “meh” looking transfer to something that looks like it could have been released this decade! There’s a few issues with the digital work used to make Thing come to life, as well as some soft backdrops that have ALWAYS been soft, but clarity and detail work in the film are stunning. I’ve literally NEVER seen the film look this crisp and sharp. Not to mention the Dolby Vision is a revelation. It’s never overly done, but the bright saturation levels of the red roses that Morticia is snipping, or the dusky and grimy blacks that just SATURATE the film are above reproach. In fact, it’s the blacks that really stand out as the single best looking element of the film. I was expecting at least some crush and banding due to the copious amounts of black in the film, but this is probably one of the most picture perfect discs I have seen in a long time in regards to silky, inky blacks.

The Addams Family was recorded in Stereo Surround for the theatrical one, then remastered for a full 5.1 mix for the 1999 DVD, and that particular mix is the same one that we have here, just in DTS-HD MA lossless encoding. Being that the 5.1 mix is just an unfolding of the stereo surround mix into 5.1 form with some added LFE, it’s not going to be a rip roaring mix, but it is rather well done with a light and airy feeling to it. The more diabolical traps and machinations of the Addams mansion come through with force and heavy clarity, while the dialog is still the main center of attention. Ambient creaks and groans of the mansion come through in the surrounds, and overall makes for an engaging track. 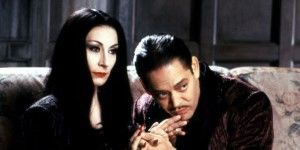 • EXTENDED CUT OF THE FILM with an extended version of the dance number
• THEATRICAL VERSION OF THE FILM
• NEW Introduction to "More Mamushka!" version by director Barry Sonnenfeld
• NEW Filmmaker Focus: Barry Sonnenfeld on The Addams Family
• Archival Featurette

​
Containing both cuts of the film, this is the best the movie has ever looked and sounded. Barry Sonnenfeld supposedly oversaw the new transfer personally and a LOT of work was put into remastering this to look as good as it possibly can. The results are that the work paid off, as The Addams Family looks INCREDIBLE in 4K UHD. I can’t be sure if the audio track is the same as my memory may be faulty, but it’s a great sounding mix that really compliments the antics of the film. Fans of the movie WILL be pleased, as this is the definitive edition of the film out there. Highly recommended.

Thanks for the review. I have enjoyed the series when it was on tv while in syndication.. I never saw the movies. Will check this one out.

I agree that I found this to be a sparkling A/V presentation.

I agree that I found this to be a sparkling A/V presentation.