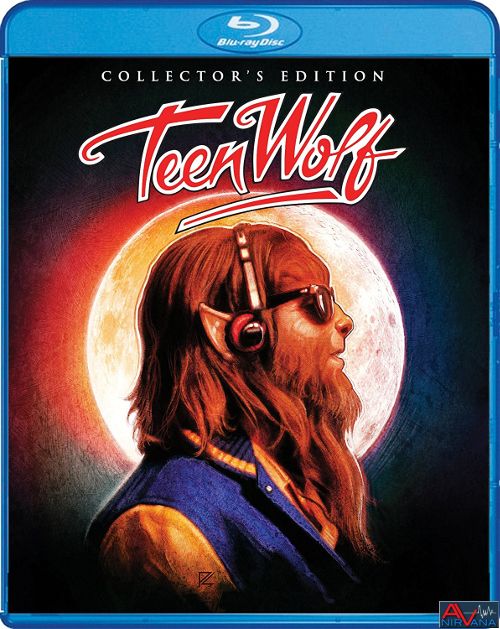 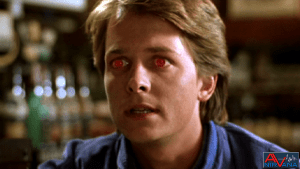 Movie
Adolescence has never been an easy thing. Those teenage years between 14 and 18 are rife with growing into one’s body, emotional instability, frustrations at dealing with parents, and the joys of teenage romance. It doesn’t help when you’re a bit of a dweeb in the eyes of most of the school and you’re not the most athletic person the planet. The tale of “it’s only skin dip” is about as old as time (grrr, now I can’t get rid of Mrs. Potts’ voice singing in my head) and before Teen Wolf as an overly emotional and angsty dark TV show on MTV, it was a goofy 80s extravaganza starring a little rising star known as Michael J. Fox. The film has kind of lost much of the appeal that it did when I was a young kid watching the VHS, and the special effects were incredibly bad for the time, but it is still a fun and VERY cheesy bit of nostalgia to enjoy.

Scott (Michael J. Fox) is your average high school kid in a rundown school. He’s first string on the basketball team, but when your team is routinely beaten 70+ to 12 then it’s sufficed to say that it doesn’t say much being on the team. Sadly the rest of the school seems to look down on him, and the only two friends he has are his over the top classmate Stiles (Jerry Levine) and gal pal “Boof” (Susan Ursitti). Like most teenage boys, he starts to discover some changes to his body, a few things here and there, some hair where he never had any before. Only it’s not what you think. Scott soon starts getting long hairs come out of his chest and his hearing becomes enhanced to the point of hearing dog whistles. Yup, you guessed it. Scott is becoming a werewolf. A trait in his family that sometimes skips a generation, but hasn’t this go around of the gene dice roll.

When Scott transforms in the middle of his basketball game, it brings shock and awe, but even more awe when the new Scott suddently has a lot more strength and agility than he used to. After a gasp and a little bit of being taken aback, everyone around him blithely just accepts Scott’s transformation as if he had gotten a far out haircut, or came to class looking like James Dean. Now Scott is the belle of the ball and suddenly the most popular kid in school. Only thing is, with great power comes great responsibility (have we heard this before?), and the new werewolf is lacking greatly in the second department. His popularity has shot through the roof and everyone seems to be fawning over the new “beast” within him (when he wasn’t a blip on the radar before). Giving him attention, putting him at the top of lists etc. Even the snooty Pamela (Lorie Griffin) who has evaded his affections for so long is suddenly throwing themselves at him. 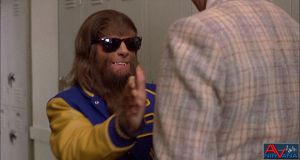 However, not everyone is comfortable with his change. Boof has OBVIOUSLY been wanting Scott for as long she can remember (Scott is oblivious in typical male fashion) and going with the whole “skin deep” aspect of the story, wants him back in his original form. Scott is also a bit nervous as he finds himself engaging in over the top antics and being….well…. not himself in his new skin.

Teen Wolf is a goofy piece of 1980s nostalgia. Michael J. Fox was on the cusp of his major career breakthrough back then, and he was a baby faced little munckin. Back to the Future was being released the same year, but it totally eclipsed Teen Wolf in the box office, and for good reason. Michael as a wolf was more a slapstick teen dramedy (an 80s dramedy that is), and it has ALL the ear marks of a film that hasn’t aged well. There are gobs of sloppy cheese from the goofy basketball coach, to the horrible rubber prosthetics, down to the “bad girl wants me now” scenarios. I was laughing a LOT harder than I usually do at the film, and I think part of it is due to how weakly the film has aged.

The film works as well as it does due to the charisma of the cast, as well as the uniqueness of the film. Back then Werewolf movies were usually slasher horror films, and the idea of having a teenager become one in a school setting that DIDN’T include cutting everyone to ribbons was a bit charming. Plus you have Michael J. Fox in his teenage prime. He and Stiles are a blast on screen, and Susan is adorkably cute as the gal pal (who wants DESPERATELY to be a bit more than that) in this little Pretty In Pink meets Silver Bullet. 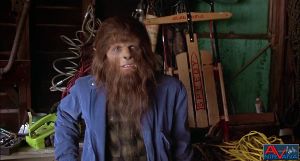 Teen Wolf was never very good looking on the DVD or the MGM Blu-ray (the Blu-ray was actually pretty terrible), but Scream Factory has done a new 2K scan that looks a HEAP better than anything we’ve seen before. Colors are more vibrant, clarity is better, and sharpness is much improved. There is a healthy layer of 80s grain over the whole film, and despite some speckles and flickers here and there, the print looks to have been cleaned up very nicely. Sometimes the black levels can be a bit grayer than I would like, but they are overall very well done and show little to no crush in them. It’s a solid transfer from beginning to end, but that contrast boosting that creates those grayed blacks is the only real MAJOR flaw I can think of. Well done Scream Factory, well done.
. 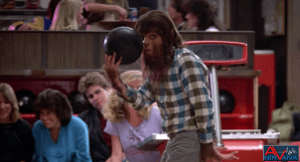 The 2.0 DTS-HD MA track (no 5.1 mix for this one, as has been the case since it’s theatrical release) is not a GREAT track, but it is a good sounding 2.0 mix. The dialog is strong and cleanly replicated in the front two speakers, and the hustle and bustle of the gymnasium and schoolyard setting gives ample enjoyment. The track IS a bit thin though, and I really wish we’d had a dedicated lfe channel to bring some oomph to the growls and crashes that occur during the film. Satisfactory for sure, Teen Wolf and it’s 2.0 lossless track just fail to excel as it’s only faults. 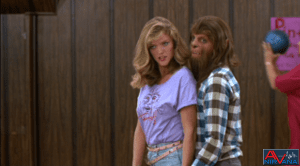 Teen Wolf isn’t the greatest of the 80s films, but it was a fun little movie that still stays pretty relavent to day, although much of the enjoyment comes from the actual nostalgic feelings I had for the movie as a young boy. Scream Factory has given this a new transfer from the Interpositive, and it looks substantially better than the MGM Blu-ray released a few years back. Strangely enough, the DTS-HD MA track is better as well (usually it’s a direct port), and the new 2.5 hour documentary is fascinating to watch. The extras aren’t AS packed as most of Scream’s special editions, but it’s a worthy entry into the collector’s edition “genre”. A fun nostalgic watch.

apologies for the mixup. I had integrated part of my review for Teen Wolf Too into the template and it got mismatched. The issue has been fixed

Thanks for the review. I enjoyed this one in the theater long time ago in the 80s. Will see this as a Nostalgic watch.

I love that line in the movie. Throw the ball fat boy lol.