Here is a graph of my setup at three different levels (12 dB apart total) that encompass the usual range I listen at. There is a plot of the difference, too, which says to me that the concern raised is not an issue in this setup. 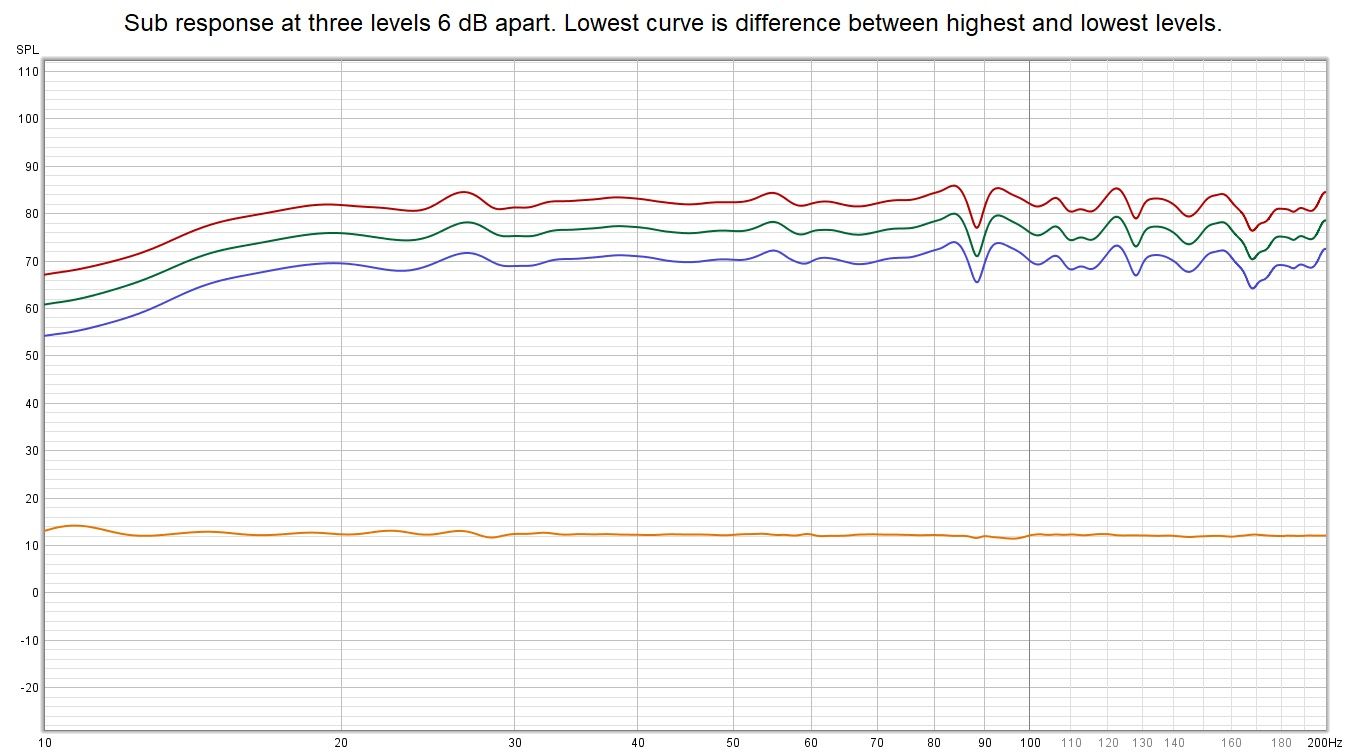 Yep... looks like you'll be all good at nominal volumes.

The only other concern would be one the lesser sub runs out of power and the better sub keeps on going, then you'd see a difference, but that would most likely require extreme volumes, and possibly a risk to the lesser sub to test. You may not ever reach that volume, but if you do, there would no doubt be a difference... UNLESS of course they both run out about the same volume level. Databass might have the max output levels for both subs.
M

Sonnie said:
The only other concern would be one the lesser sub runs out of power and the better sub keeps on going, then you'd see a difference, but that would most likely require extreme volumes
Click to expand...

Way, way more extreme than I'd ever be playing them! We're talking a music-only system with three 12" or 13" subs in a 12.5 x 20 x 7 ft room. It's also very quiet, so I can play at lower levels and really hear everything. If any of those subs should run out of power, the plaster would be crumbling first!
M

After six months, I finally got the third sub integrated properly. It was so logical, I should have thought of it originally.

My two JL Audio subs were run in stereo from an Anthem STR Preamp. When I added the SB-3000, I ran it as mono, and since the processor supports only 2 subs but has both XLR and RCA connectors, the SVS was supplementing both of them. (As it wasn't centered in the room, it was impossible to get the phase relationships right in that oddball configuration. I don't know if that contributed to the problem.)

The measurements looked good, but I was bothered by extra chestiness in the sound. The JLs alone never had that, and I didn't think it was a problem with the SB-3000 either.

When I thought it through, I hooked it up this way:
That let the STR set the HF rolloff appropriately for both the JLs (130 Hz) and the SVS (160 Hz). Phases are also set correctly, as the JLs are both the same distance from the listener, and phase for the SVS is set for it only. The new settings cleared up the sound perfectly.

Probably no one has the same wacky setup I do, but it's just an example of missing the obvious until you think of it, and -- surprise -- having it work.
M

An update for the bass-heads here. Though the setup I described immediately above was the best I'd tried, I still wasn't entirely satisfied for long. The bass was still a bit lumpy.

I finally sprang for another SVS SB-3000, so both R and L sides of the room have one JL F112 and one SVS SB-3000 (my preamp has two sub outputs for each channel). After coordinating phase between subs on each side, I ran Anthem's ARC, and the audible results are the best yet. Bass is smooth and strong without chestiness or boom.

For technical reasons, ARC does a better job with L and R subs than with two mono subs.

I have found that, since the bass has become so solid (for lack of a better word), ARC's default bass boost (they call it "Room Gain") is way too much. I've gradually reduced it from 4+ dB to about 2.75 dB, and now it's just about right.

Other than a little tweaking from time to time, I think I've reached the end of this road. It certainly is the best arrangement I've tried so far.
K

Other Equipment
Cables by: TEO Audio, Cardas and AudioSensibility

Mike-48 - are your four subs symmetrically placed around the room (e.g. Harman's suggested 25% mark across room width and length) or random placements?

Is your Anthem's ARC and OEM version of DIRAC so it would fix frequency and phase for all subs via a FIR filter?
M

@kevinzoe - The subs are in the corners. The goal was for them to be as near to axially symmetrical as possible, as I'm running them L and R. After measurements of different positions, I put them as close to the corners as the room's large corner bass traps will allow.

Anthem's ARC is their own product, not related to Dirac. (I have used both.) With the processor I have, ARC controls up to 2 subs, setting crossovers, adjusting FR, and optimizing phase between L sub and L main, then R sub and R main. Before it does that, I manually adjust phase and relative volume between the L front and L rear subs, then between the two R subs,.for smoothest bass response.