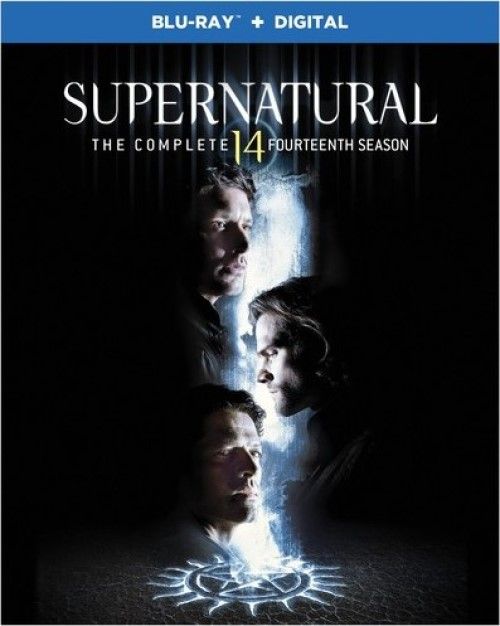 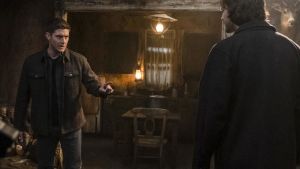 Movie
Supernatural has been hailed as the longest running sci-fi show right now, and they are definitely correct, with one caveat. They’re the longest sci-fi show in the UNITED STATES. Longest running show in the world is still held by the Brits for their Dr. Who series which went on for over 20 years. That being said, I have a weak spot for Supernatural. I was one of the early adopters of the show back in my 20s after graduating college, and was a rabid fan for about 4-5 years. After that I faded from the show’s gaze and went on to other things, only to come back around season 10 and binge watch my way back up to being current and sticking with it till the bitter end (which is sadly coming this next year, as the 15th season that starts one month from today is going to be the final one for the long running sci-fi/horror show).

Season 14 picks up right where season 13 ended, with Michael the Archangel from the Apocalypse world inhabiting Dean (Jensen Ackles) body with his spirit, and putting his grand plan for world domination into swift motion. This throws some hinky dinks into the works for the first few episodes, as much of the show really revolves around Dean and Sam’s (Jared) interactions with each other. And while we DO get to see Dean’s body on screen, it’s only as a shell for Michael, which leaves some of the witty interactions between the two leads on the drawing room floor. As such the first 2-4 episodes are a bit sluggish to get through and don’t really feel as high quality as most Supernatural seasons are. BUUUUUUUUT, do stick it out, cuz once things get resolved on that front the show is back once more again in high order with the two getting back to kicking butt and taking names.

There’s some fun episodes this go around, with the highlight been the 300th episode (wow, I can’t believe it) where Jeffrey Dean Morgan comes back as John Winchest for a heartfelt and powerful reunion that makes the price of admission for the season alone worth it just for that one episode. I’m not ashamed to say that I played that particular episode over a second time after I finished it, as it was a massive coup for the show, and a great reunion for those who have been missing him since the beginning of the series. 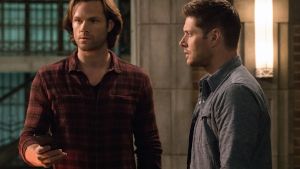 Looking back on the season, I’d say that his is the best of the Andrew Dabb and Robert Singer written seasons. They had some problems with season 12 and 13 with plot points fading into nowhere and certain disconnects, but they seem to have gotten their groove back in terms of writing a consistently even season for once. The whole 20 episode arc has minimal filler (for a 20+ episode show) for the most part and wraps up with a pretty wicked twist for the events that are going to wrap up next year.

There’s some flaws here and there, mainly related to Nick getting reunited with Lucifer (wasn’t a wild fan of that particular side story), but overall this is a very solid season to a show that has lasted WAAAAAAAAAAAAAAAAY longer than anyone anticipated. Usually shows really start to go downhill in the 6th or 7th season (the show did have a dip around season 8 or 9), but for some reason the Winchester twin duo has been able to keep its head above water and push out consistently entertaining stuff, making it one of the highest and longest rated CW series of all time (there’s a reason it’s considered the CW’s show runner). 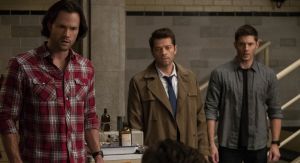 Over the 14 seasons the show’s presentation on Blu-ray has differed a little bit (earlier seasons were just as the Blu-ray format was taking off, and showed compression and weak VC-1 encoding), but over the course of the years the show’s encodes have gone steadily upwards (as have most of Warner’s TV shows coming from The CW). The digital photography is crisp and clean, with a nice and shiny veneer that keeps everything kind of glossy looking. The show can dip into darkness more often than not, but black levels remain solid and the shadow detailing is impressive. Fine detail upon clothing and faces are well defined, and overall this is a very impressive looking season (much like the last several). No traces of major artifacting is to be found, and the show’s grim look is replicated perfectly on the BD-50 discs.

The same sense of quality increases from the earlier seasons till now rings true just as much as my comments on the video quality increases. Full on lossless encodes in DTS-HD MA 5.1 is the norm now (instead of 5.1 640 kpbs Dolby Digital from the first few seasons) and the show’s action oriented nature makes it a hit on Blu-ray. In fact, it’s a rather aggressive mix that punches away without mercy, filled with lots of low end bass to enjoy, and loud crashing moments during the copious conflicts. It’s kind of the “anti-Disney” track as it were, running just a bit hot, with everything but dialog coming out just a bit on the warm side. It’s evenly mixed and the hot mix doesn’t drown out the dialog at all, which makes for a wickedly aggressive listening experience that is a blast to listen to. 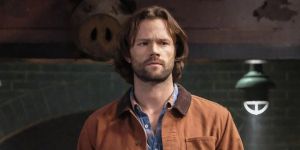 The big ending for the show came out of nowhere, and while it’s freaky and jaw dropping in many ways, is also a clue that the show producers didn’t have any realization that the show was ending the next year until the last moment. It’s pretty obvious that the finale is to set up that 15th season with the Bad Place coming into play once more, and while it’s neat, also didn’t feel as seamless as it could have been. That being said, it’s going to be sad to see one of the longest running demon hunting duos of all time end and I really hope they can pull it off. Season 14 was a solid entry to the lineup and definitely feels better than seasons 11-13 that suffered from new writers not having a grasp on the show’s lineage. The Blu-ray looks and sounds great (as usual) and the extras are the typical cookie cutter ones that we have come to expect from The CW shows over the last 3-4 years. Fun Watch.