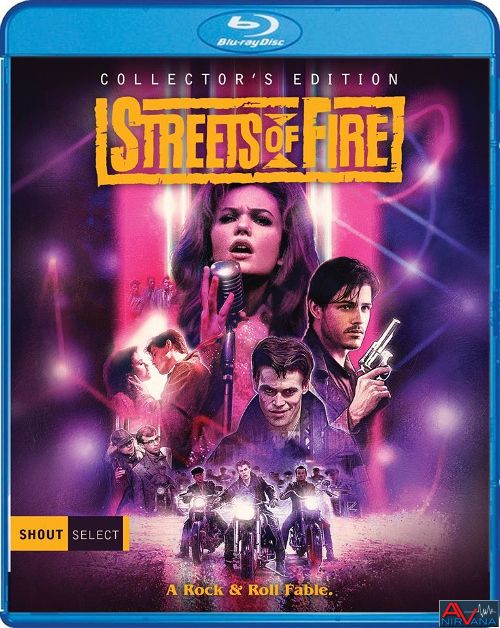 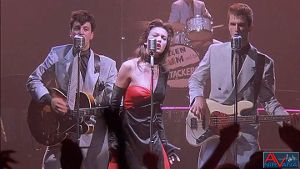 Movie
I think fans had almost given up on getting a domestic release of Streets of Fire on Blu-ray. It has been released in 5 or more other countries, with universal seemingly unconcerned about dropping the rock and roll fable onto Blu-ray, content to let the HD DVD be the only next gen release available. So color me tickled pink when Shout Factory announces that the film is finally coming, and on their premier Shout Select line to boot. Their Shout Select line has had fantastic results so far (with a few notable exceptions like Death of a Salesman) and Streets of Fire certainly delivers all of the goods. New 2K master, check. New special features, check. 2-disc special edition with reversible cover art (which both are amazingly well done) and slipcover? Check. Add those all together and you have a fantastic release that does the cult classic justice for once.

Streets of Fire plays like a mix of Sam Spade and 1980s rock culture, with over the top dialog and copious amounts of machismo playing center stage. Rock diva Ellen Aim (Diane Lane) is kidnapped by motorcycle gang leader Raven Shaddock (a baby-faced Willem Defoe) and her boyfriend/manager Billy Fish (Rick Moranis) decides to hire a mercenary to get her back. This mercenary just so happens to be Ellen’s ex-lover, a soldier of fortune turned merc by the name of Tom Cody (Michael Pare). A guy who used to rule the streets before he left to join the army. Saddling up with homeless soldier McCoy (Amy Madigan), Tom Cody ropes Billy Fish into coming along for the ride to save the woman they both love.

Saving her turns out to be pretty easy. It’s the getting out and getting away with it that may be the hard part. Raven is a madman and vows to hunt down the lone wolf and his girl and exterminate them both. Jumping on a bus of traveling musicians, Tom, Billy, Ellen and McCoy make it back, but Tom has other plans. He and Raven have unfinished business and it’s the only thing a man can do when another man challenges you. Strip down to your undershirt and battle your nemesis in the middle of the street with everyone (including the cops) watching and cheering. 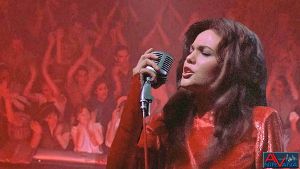 Streets of Fire is pure 80s charm all the way. Mixing tons of machismo and 1950’s style detective lingo in with a rock and roll epic story makes for great watching, though. In all reality, it plays out like a classic western with a different skin. The lone wolf comes in to save the captured diva against the crazy villain. Everything hits ever tick mark on a John Wayne or Clint Eastwood western, just with modern guns, motorcycles and 1980’s rock music. Half of the fun actually comes from the music that makes up the backbone of the storytelling. Each and every classic song fuels the energy and charisma of the film and pushes the thing plot along. There is some flat parts in the 2nd act of the film, but the first act is awesome and the final act does everything like a classic western down to the duel in the middle of the street and the hero walking away into the sunset, destined to be alone.

The movie is one of Walter Hill’s best films, in my opinion, and still a blast to watch. People in today’s society may not remember Michael Pare that much, but in the mid 80’s he was being pushed as the next big thing. For some reason he really didn’t get a WHOLE lot of traction, but was a personable character who could play the tough guy role pretty well. He’s still running around playing bit parts here and there today, but his most notable claim to fame was being top billed in movies like The Philadelphia Experiment, Village of the damned, Warriors, and Into the Sun. This is probably one of his earliest and best roles, but he’s framed by some very young superstars that do just as well. Rick Moranis is fairly tame from his more comedic self, but he can play the douche bag character to a T, and that’s exactly what he does here. Diane Lane and Willem Defoe don’t get a whole lot of screen time, but Defoe hams it up to level 10 and Lane plays the damsel in distress well. There’s even cameos with Bill Paxton, Robert Townsend and Mykelti Williamson to round it out. A cheesy array of characters, but pure and utter fun from start to finish 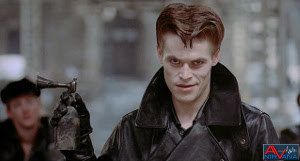 Streets of Fire was never released in the U.S. on Blu-ray, but has been released in the U.K., France, Germany, and several other countries making non region free Blu-ray fans VERY impatient (most of us had to do with Universal’s old DNR ridden HD DVD from 2007). Walter Hill’s rock epic is classic in its own right, so I was very eagerly awaiting this new 2K remaster from Shout Factory, and it was WELL worth the wait. The film pops off the screen with a shiny looking encode that captures the gritty stylistic choices of Walter Hill’s film, and the print itself seems to be in fantastic shape. There’s a few little speckles here and there, but mostly we have a pristine looking image with great black levels, good contrast and exceptional detail. The film has a few spots that look mildly soft, but most of the film is incredibly sharp and detailed, showing off every crease in Raven’s hilarious leather outfit, or Michael Pare’s roughhewn face. Even the smoky nightclub where Ellen sings on stage is filled with neon colors and solid black levels that don’t keep anything from the viewer. 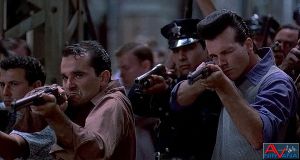 The 5.1 DTS-HD MA track is a stunner for sure, with the power rock songs flowing through all channels at just about all times. The spacious sound of the music opens up quite a bit and plays right to the audience as the main attraction, but the rest of the track is filled with enough action and auditory clarity to be top notch as well. Vocals are crisp and cleanly replicated in the center channel, while surrounds are filled with music, explosions, and the rumble of motorcycles all around LFE is deep and throbbing, adding plenty of punch to the music, while accentuating things like gun fire and a few crashes here and there. It’s a well done track that just sucks you into the center of the maelstrom of music and doesn’t let go till the credits end. Shout has also included the original 2.0 stereo mix in DTS-HD MA as well, which is also a listener. However, I happen to feel that the 5.1 mix is more encompassing, but I AM glad that the 2.0 track is on there for purists sake (I always hate when a remix is put on a disc, but they omit the original audio track. A pet peeve of mine).
. 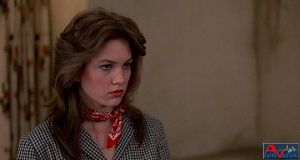 Shout Factory has delivered a simply amazing 2 disc collector’s edition (all of the special features are on a second disc so the main feature has plenty of bitrate to work with). The transfer is NEAR perfect (some minor print damage keep it from that), and the supplements are well worth digging into. This is one of Walter Hill’s most “cult” level of flicks, and one of my personal favorites for the over the top machoism and tongue in cheek humor. Rick Moranis and Michael Pare are at the top of their game and we even get to see a baby face Willem Defoe for a few minutes. Imperfect, but hilariously fun, Streets of Fire finally gets a U.S. release on Blu-ray and I can finally retire my HD DVD from 2007. Well worth picking, highly recommended.

I remember watching this movie at the theater with my dad as if were now. Great movie and will add to my collection.

I remember when this movie was released. I was in high school and this was a pretty popular movie. It was a fun watch and kept you interested through the whole thing. Oops, now I dated myself just a tad.

it's a fun piece of 80s cheese

Michael Scott said:
it's a fun piece of 80s cheese
Click to expand...