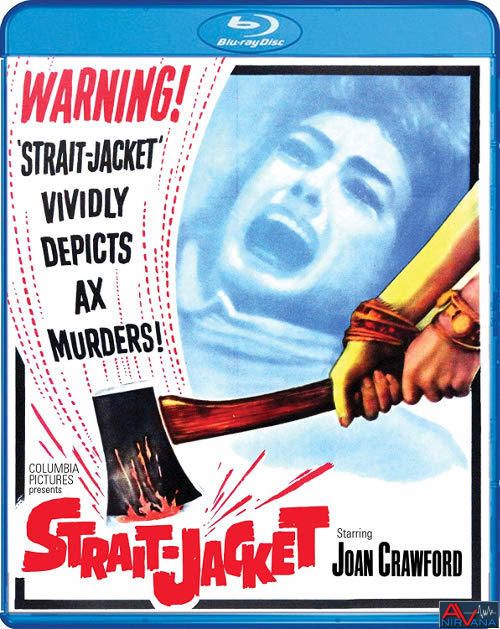 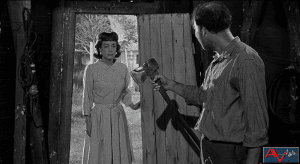 Movie
This week Scream Factory (subset of Shout Factory) has given us a one two punch of classic William Castle horror films on Blu-ray. The first being The Tingler starring Vincent Price (which I sadly forgot to request this month) and Joan Crawford in Strait-Jacket. I’m a HUGE William Castle fan, and have been ever since I was a 10 year old boy staring in terror over my brother’s shoulders while they watched them in my downstairs basement late at night. The original House on the Haunted Hill stands as my favorite of his, but he has had such a rich and varied career that it’s too many to choose from. Sadly the Blu-ray market has been strangely devoid of most of his works, but Scream Factory has actually released a small handful on Blu-ray (I believe the last one I saw was I Saw What You Did!”). However, any small amount of William Castle is welcomed on home video, and Strait-Jacket is one of my top 15 films of his.

Still a bit shaky and nervous, Lucy Harbin (Joan Crawford) has just been released into the care of her brother and daughter after being let out of an insane asylum. You see, she had gone completely off her rocker 20 years ago when she walked in on her husband and his lover, hacking them into pieces with an axe. After 20 years of therapy her doctor has finally deemed her worthy to be let out into normal society again, and her daughter Carol (Diane Baker) is eager to see her mother again after all this time. Things are a bit strained, but the two women slowly begin to bond, with Carol nervously introducing her mother to her fiancee Michael (John Anthony Hayes), but then Lucy starts to to unravel. Voices plague her mind, she beings to see things that aren’t there, and soon those violent urges that she had been suppressing for 2 decades begin to bubble to the surface, making those around her wonder if she will once again become the famed axe murderer that she was locked away for being. 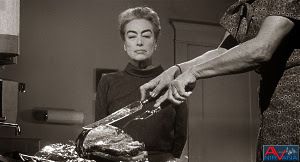 William Castle usually has some sort of gimmick with his films to focus on, but in this case the gimmick is Joan Crawford. You can’t take your eyes off of her the entire movie as she just oozes discomfort and bubbling evil. Even though she has this veneer of quiet and calm, you can tell that she is a very damaged woman, and Joan completely sells the roll. Joan is usually such a statuesque and regal actress, that watching her delve into the almost decrepit and unstable Lucy is fantastic to watch. Here every expression and look in her eyes just exudes a sense of being off kilter, so when the final “twist” comes at the end (William Castle movies ALWAYS have a twist), it’s even more shocking.

Strait-Jacket is one of William Castle’s deeper films to date. Usually the man has a sort of pulpy feel to his films, but Robert Bloch wrote the original novel that the screenplay is based upon, so his writing definitely seems to add a stable base to Castle’s usually B-level writing. While there are some dragging points in the center of the movie, there is just this absolute sense of dread and nervousness that just permeates the entire film. Modern audiences may see some of the twists and turns coming ahead of time, but that’s because these tropes have been copied and replicated so many times from William Castle films that they seem old had to us. Even though they were new and exciting twists back then. One thing that really made this film unique was due to the fact that Joan Crawford supposedly co-directed the film WITH Castle (more of an “on the set” type of thing vs. pre-planned), so Crawford’s fingerprints being all over it make it one of the more refreshing and unique films in William Castle’s repertoire 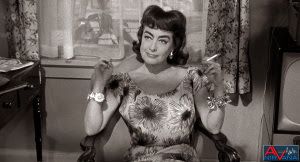 I think these William Castle films must be in REALLY good condition. There is no evidence of restoration (Scream/Shout Factory love to shout it from the rooftops if a new scan takes place), but the end result is fantastic for a 1964 film. There’s a few tiny flecks and speckles here and there, but otherwise the image is pristine. Grain levels are usually very even, but a few shots seem to have a spike that shoots up on indoor shots (when Lucy sees the doctor for the first time is the most obvious one), but other than that, I’m truly impressed. The black and white colors are well done, with no signs of crush or varying contrast, making for a TRULY pleasing video experience on home video. 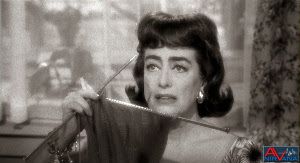 Scream Factory has once again provided us with the original theatrical Mono track in DTS-HD MA, and it seems to be in really good shape. Usually films from the 60s have a problem with background noise and recording hiss, but this one is rather clean and clear. Vocals are always well done, and the simplistic effects and horn based score are all replicated evenly. My only “issue” with the track is that it feels a bit dulled and softened compared to other Mono tracks I’ve heard. It almost feels like the dialog and audio is compressed in its range. It doesn’t cause any problems, and everything is quite intelligible, but you do notice it if you know what you’re listening for. 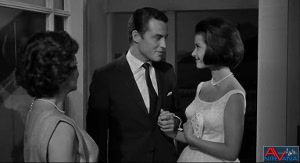 Strait-Jacket is a solid entry in William Castle’s career, and one of his more dramatic focused ones to boot (most likely to Bloch’s novel being the source). Scream Factory has given us a great Blu-ray to enjooy, with classic cover art and a very healthy array of extras that range from band new to old ones ported over from other home video releases. The audio and video are top notch for the type of film, and I highly recommend it for any lover of classic 50s and 60s horror films. Great nostalgic watch.