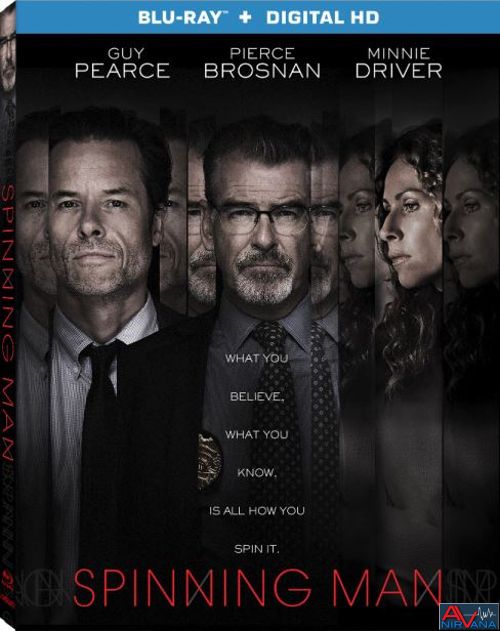 Movie
It’s amazing to watch A-list (or A minus list) actors from our past play in small time indie films as their main source of career income these days. It wasn’t that long ago that Robert DeNiro was king of the cinematic world, but now he’s stuck doing movies like Dirty Grandpa. Guy Pearce was once doing films like Memento, and Pierce Brosnan was James Bond for crying out loud! Now the lot of them tend to make their living with low end indie films, or budget DTV works. Spinning Man was based off of the best selling novel by George Harrar, so I had some decently high hopes for it, but sadly we are lambasted by a movie that has a great premise, but utterly falls apart in the third act with a horrifically contrived ending that undermines any of the tension and subterfuge that has be set up before that point. It’s decently acted, with Guy Pearce giving a rather strong performance (the first he’s done in years), but it’s a bit too little in the grand scheme of things.

The one main thing to remember about Spinning Man is a phrase from Guy Pearce’s Professor Evan Birch early on. “Memory is the least reliable, most problematic, area of understanding in the brain”. It deceives us, tricks us, and makes it so that “truth” is something that can’t always be ascertained just by remembering it. With that in mind, the film opens up with the story of a missing girl named Joyce Bonner (Odeya Rush) who vanishes from a beach. The police are all up in arms about finding who took her, and one Professor Evan Birch (Guy Pearce) is singled out by detective Malloy (Pierce Brosnan) as a possible suspect due to the fact that a Volvo that looked like the Professor’s was seen at the beach the day of the crime.

While Birch and his family deny the accusations, there’s this sense of doubt over the whole situation. The professor has hints of sleeping with students strewn throughout the movie (intimations of a last minute move due to scandal, hints at an affair with a previous student, fantasies running through Birch’s head), and even his own Lawyer starts to doubt the veracity of his innocence. The film is really setting us up for an intellectual game of cat and mouse, with Birch and Malloy dancing around each other trying to get the other one with his guard down. Being a philosophy teacher, Birch spouts out mantras about truth being what you interpret, and the “search for logic”, while Malloy uses those same tactics to trip up the professor into revealing that he is the “killer” of the missing girl.

Sadly the movie’s well meaning story is sabotaged by its own vagueness. It becomes obvious in the second act that not everything is exactly as shown on the screen. I guess you could say that Birch’s memories of what happened is an unreliable witness, keeping us guessing what is actual truth, and what he has tricked his own mind into thinking. But it’s the third act that really brings things crashing down around us with an insane ending that throws so much doubt into the audiences mind over what we are seeing that NOTHING can really be believed. You can tell that director Simon Kaijser was trying to make a real heady film that would boggle the mind, but he interjected so much confusion and double backing upon itself that it just ends up being confusing and convoluted to the point of throwing ones hands up in the air and just giving up.

The movie is actually acted rather well. Minnie Driver is incredibly accurate with her portrayal of a mother/wife on the edge of sanity, while Guy Pearce is likable, sleazy and incredibly relatable all at once. The man hasn’t had a good acting job in quite some time, and it’s refreshing to see the veteran actor use his skills to good use. Sadly it’s wasted in this project, with a muddled script, choppy editing, and film that gets stuck so far up it’s own tail intellectual tail pipe that it fails at most everything it set out to be. Spinning Man really did have potential, and the tension that it builds is quite good (for the first act), but once the middle of the film is reached the movie spirals out of control into a train wreck of an ending.

Rated R for some language including sexual references

The only information I could glean about the video cameras used was that Spinning Man was shot with some variant of the very popular Arri Alexa digital cameras. The photography is rather strange, with a very VERY heavy green and blue filter (one that REALLY is pushed towards the green end of the color spectrum) and it is done so strongly that I felt like I was in the middle of The Matrix Reloaded! Colors are a bit sallow as a result, but saturation level is good and there are some splashes of primary colors here or there, like a book in Birch’s office or a bit of amber colored hair on a student. Black levels are good and fine details can range from good to stunning. Although I did notice a hint of softness to the photography that robs some of the shots of the fine detail it COULD have had. Outdoor daylight shots benefit the most, with crisp facial details and the green/blue grading seems a little less prominent.

The 5.1 DTS-HD MA track is what you would expect of a thriller of this nature. It’s definitely dialog heavy at times, but there are quite a few moments where the track expands past the talking, such as the tense score or the loud noises of a crowd where Birch and his daughter venture out into. There’s not a whole lot that will surprise viewers, but the mix is more than adequate at doing its job and there’s some punchy LFE throughout the mix. Vocals are crystal clear, and the overall track is quite nimble in its clarity.

The best way to describe Spinning Man is with one word, “forgettable”. The premise is solid, and the first act builds some good tension, but the movie just keeps “spinning” it’s wheels (yes, pun intended) and by the time the ludicrous 3rd act rolls around the audience has pretty much given up. It’s smartly acted with a group of solid performances, but that can’t get around the fact that the movie itself tries to be overly intellectual and fails miserably doing so. The Blu-ray from Lionsgate is well done, with good video, solid audio, and the usual anemic extras. I hesitate to recommend skipping the movie altogether as Spinning Man wasn’t a horrible film, but it’s definitely on the low end of the rental spectrum at the very least.

Thanks for the review. I will skip it based on your recommendation.